November 27, 2012
33
The Ka-31 helicopter (product 503, according to NATO NATO codification Helix-B) is a radar patrol helicopter designed for the needs of the Soviet Navy. The long-range radar detection helicopter was developed on the basis of the existing Ka-29 naval transport and combat helicopter. A helicopter can be based both on ships of various classes and on land. All Ka-31 and Ka-27 helicopters can be based on the Ka-29 helicopter. The helicopter can be used in the land version for solving the tasks of the air defense of the ground forces. To date, this helicopter has no world analogues.

The DRLO Ka-31 helicopter is intended for radar control of air and sea space, early detection of low-flying targets like cruise missiles, helicopters, aircraft, as well as surface ships and their identification at long-range targets. The helicopter is able to determine the parameters of the trajectory and the coordinates of the targets, transmit information about the observed and airborne radar situation to the ships and command posts of the ground forces. 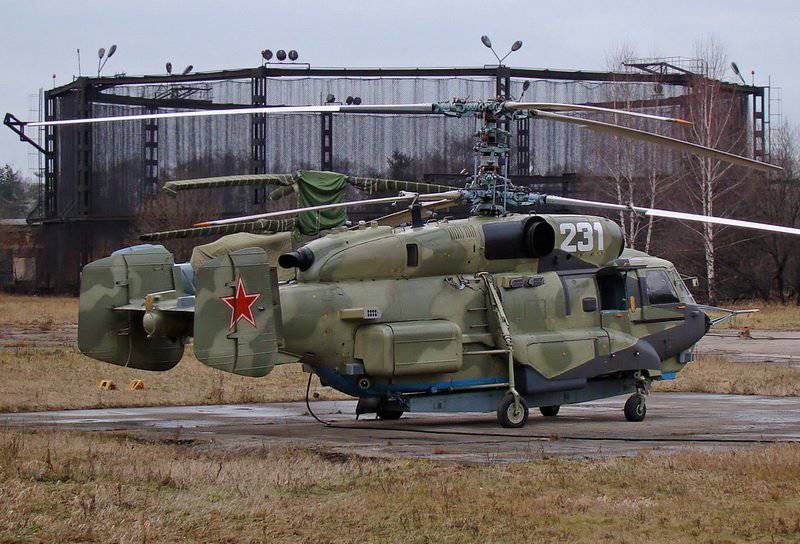 The Ka-31 helicopter is made according to a coaxial helical scheme. The carrier system and the power plant of the machine were borrowed from the Ka-29 transport and combat helicopter. Changes to its design were dictated by the need to install a radar antenna under the helicopter's bottom, which during flight can turn on a special hinge device and occupies a working vertical position. The swing of the radar antenna mirror mounted on the Ka-31 is 6 meters. In the stowed position, this antenna is pressed to the bottom of the helicopter body and fixed.

To ensure the exit and entry of the crew, a door was installed on the right side of the helicopter's transport cabin. On the sides of the cockpit, instead of the usual sliding doors, emergency hatches were installed with sliding glazed doors with an emergency discharge system. The helicopter had a four-bearing landing gear, while the front supports were removed in special fairings, which were located outside the sides of the helicopter fuselage. The main landing gear rose up, freeing up space for rotation of the radar antenna in flight. Main rotor blades were made of polymer composite materials and equipped with anti-icing and electrothermal systems.

The need for early warning assets at sea was clearly demonstrated during the Anglo-Argentine conflict over the disputed Falkland Islands. Due to the absence of helicopters or DRLO planes in the composition of the British expeditionary forces, they could not promptly search for, detect, and subsequently intercept low-flying Argentine planes. The use of destroyers in this capacity ended unsuccessfully for the British - the loss of 2's of such ships (Coventry and Sheffield). 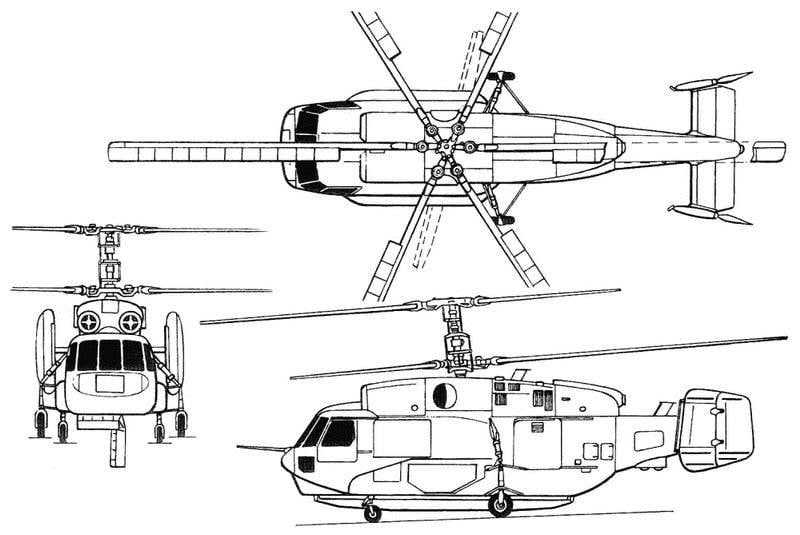 Taking into account this military conflict, in 1985, the OKB Design Bureau. NI Kamova was assigned to create an AEW helicopter. When creating the Ka-31, it was based on a glider, a power plant and a carrier system of the Ka-29 transport and combat helicopter already produced. The main difficulty in its development was to pair the powerful radar with the rest of the helicopter flight-navigation equipment, as well as to ensure the stability of the helicopter in the air during the rotation of the radar antenna. The prototype of the new helicopter made its first flight in 1987 year. After a series of fairly lengthy tests, the car in 1995 was adopted by the naval aviation of the Russian Navy. Serial production of the helicopter was carried out at the plant, located in the city of Kumertau.

The Ka-31 helicopter was designed to detect air targets as well as surface ships and their tracking. The ship-based helicopter is designed to provide air defense for fleet combat units operating outside the range of DRLO aircraft and coastal radar. This helicopter has no analogues in the global helicopter industry. The basis of its on-board complex is a sufficiently powerful radar on solid-state elements, which, for operation in the circular mode, has a flat-phased antenna array (PAR) that is produced in flight. In the stowed position, the antenna is simply located under the bottom of the fuselage.

The on-board radio-electronic system installed on the helicopter allows the Ka-31 to conduct automated flight along a pre-programmed route in any climatic and weather conditions. The radar allows the DRLO helicopter to simultaneously detect and automatically track to 20 targets. 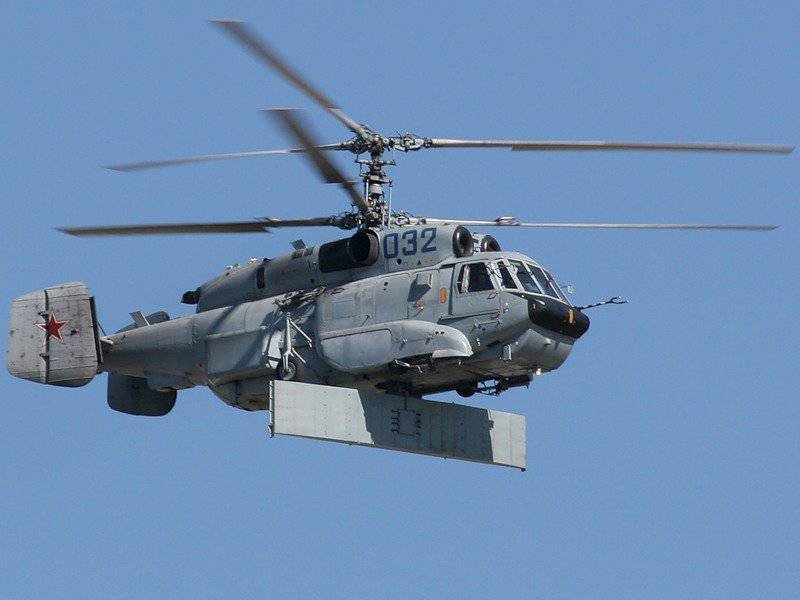 Information on all detected targets is automatically transmitted over the telecode channel to various control points. The Ka-31 is equipped with the Oko Long-Range Radar Detection System (E-801), created at the Nizhny Novgorod Radio Engineering Research Institute. During normal flight, it fits snugly to the underside of the fuselage of the car, creating minimal aerodynamic drag. When translating the antenna into the working position, it deviates downward by 90 degrees, while the helicopter landing gear stands slightly up, so that the chassis does not interfere with the operation of the radar in the rotation mode. Radar with phased array weighs 200 kg, the antenna area is 6 square. meters, and its length is 5,75 meters. The antenna is able to provide detection and subsequent tracking to 20 targets. Fighter-class targets are detected at a distance of 100-150 km, and ship-class surface targets are detected at a distance of 250-285 km.

The Ka-31 helicopter is equipped with a flight-navigation complex (PNK), developed in the Instrument Design Bureau of the city of Saratov. While the radar antenna is in the released, working position, the NCP of the helicopter provides stabilization of the angular positions, as well as the true or barometric altitude; flight in the patrol zone along typical paths; automated withdrawal of the car on the airfield or ship; output to the landing point using landing radar signals. The long-range radio navigation system available on the helicopter allows for the continuous reading of the geographical coordinates of the Ka-31 (latitude and longitude), as well as automated helicopter navigation along a pre-programmed route and then returning to its basing point.

To transmit the received information about the tactical situation through the open and closed channels of the telecode communication, a special communication complex was installed on the DRLO Ka-31 helicopter. With a flight altitude of 1500-3000 meters, transmission of telecode information from the aircraft is possible for a distance of at least 150 km. In this case, the automatic registration of flight parameters is carried out with the help of special magnetic recording equipment "Tester-3K". 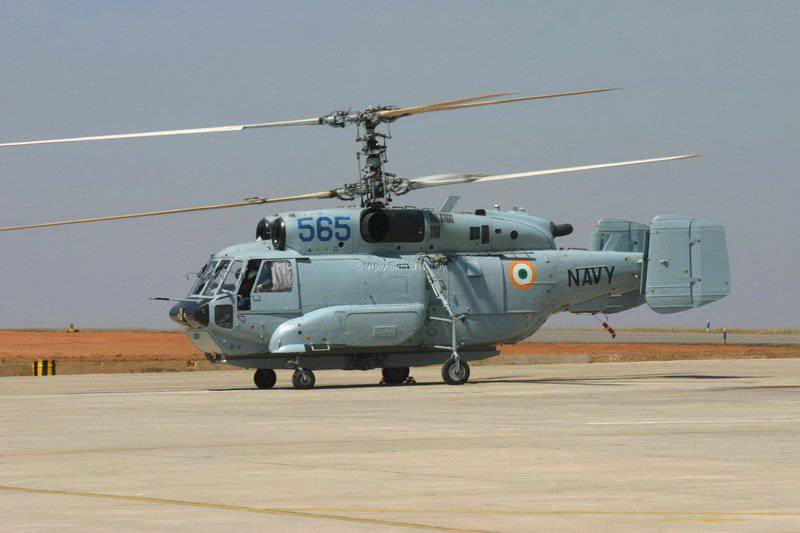 Ka-31 Indian Navy
In the case of the use of a helicopter in the interests of the ground forces, the Ka-31 can be deployed on small unprepared sites located near mobile anti-aircraft missile systems, providing them with target designation. It is worth noting that due to the liquidation of the 1143 project ships in the Russian fleet, the customer’s interest in this vehicle dropped significantly and the helicopter did not go into mass production for the needs of the Russian Navy. The only 2 vehicles available in the fleet are based on the Admiral Kuznetsov TAKR. At the same time, there is reason to believe that the number of helicopters of this class in the Russian fleet will increase with the commissioning of the Mistral-designed docking helicopters.

Tatkyko-technical characteristics of the Ka-31