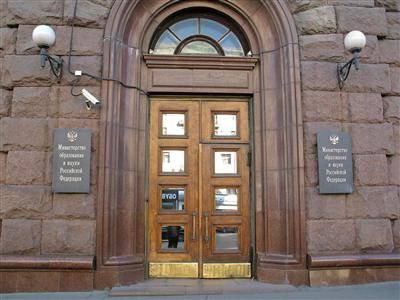 Scandals in individual ministries of the Russian Government are gaining momentum. The fact that Anatoly Serdyukov managed to “reform” in due time, now it is necessary to rake Sergei Shoigu, the corruption ruins that the regional development minister Oleg Govorun left in his department, now need to be analyzed by the new minister Igor Slyunyaev. And everywhere, either billions, billions, billions of loot, or securely hidden in the corners, loom. And now there are new revelations, new scandalous statements and new disgruntled statements about the work of the ministries. This time, the Ministry of Education and Science, which today has the honor of heading the doctor of physical and mathematical sciences Dmitry Livanov, became the object of close interest.

It would seem that someone else, if not a person with such an impressive degree, can restore order in the educational department. And after Livanov found himself in the chair of Andrei Fursenko, who headed Minoobrnauki since 2004, many people said: Phews, well, finally it happened; now the new minister will force the educational and scientific systems of Russia to work as they should, and storm transcendental heights.

But somehow, from the very first steps of his work as minister, Dmitry Livanov began to demonstrate rather strange methods that reminded a large number of Russian citizens of Andrei Fursenko's “ever-presenting cause” with his experiments on education, when the educational environment was cut to life and often without taking into account opinions most experienced teachers and scientists. And the more steps Dmitry Viktorovich took in the future (and while he continues to do) in his new post, the more questions arise to him, and the more bewilderment cause these steps.

One of the latest "achievements" of Minister Livanov is an amazing list of inefficient Russian universities. It would seem that the purpose of the Ministry of Education and Science related to the publication of this “black list” is understandable: to reduce the number of universities that have utterly burst into Russia. According to the Federal State Statistics Service, the total number of institutions of higher education in Russia at the end of the 2010-2011 school year was 1115 units, with the total number of students enrolled in them in 7,049 million. Of these universities of state and municipal - 653. For comparison: in the Soviet Union in the 1980-1981 school year, 494 high school operated, and the number of students was just over 3 million people. This is despite the fact that the population of the USSR in 1981 was approximately 110 million people more than the population of modern Russia ...

Of course, it is necessary to do something with such a large number of high schools, because many of these institutions of educational activities are often simply divorced from the needs of the Russian economy, science and culture.

However, in our Ministry of Education and Science decided to go on a radical scenario: if you need to reduce the number of universities - yes, for God's sake ... For this, the list of inefficient high schools was created, formed according to criteria that were sharply criticized even by those universities happy coincidence in the "list of Livanov" were not included. There were several criteria. Who invented them: whether Dmitry Viktorovich himself, or someone whispered in his ear, it's hard to say, but ... things went.

1 Criterion. The number of points according to the results of passing the USE from incoming students.

This point alone causes, let's say, vague doubts about the objectivity of the list. Well, judge for yourself how to judge the effectiveness of an organization, roughly speaking, according to estimates in the certificates of maturity of its employees. In the end, interest earned on the Unified State Exam can tell about the effectiveness of schooling in schools (and this is unlikely), but not in any way at universities. Why, then, do not begin to use the student's average grade for assessing either when entering a university, and after graduating from a graduated university? .. Indeed, it is quite possible that an entrant comes with clearly unimpressive grades, but then perfectly masters the chosen profession. In this case, the effectiveness of education in the university is obvious.

2 Criterion. The number of foreign students.

Hmm ... It turns out that if only Russian citizens study at a university, then such a university has no chance at all to continue their educational activities as they are at the moment. But in Russia there are many higher educational institutions in which, if there are foreigners, they can be counted on the fingers of one hand. And what does the number of Vietnamese, Chinese or Nigerians have to do with university efficiency? Here, obviously, Minoobrnauki looked toward the Harvards and the Sorbonne before coming up with this dubious criterion. Was it necessary? ..

3 Criterion. The area for each student in high school.

According to this understanding of university efficiency, the most ideal Russian university is the one in which two or three students study, at best, preferably from Kenya, China, or any other country besides Russia. It turns out that rectors today, in order to transfer their universities from inefficient to effective, will have to either deduct a large part of the student body, or add additional floors to increase free space.

But it would be nice to determine efficiency by new equipment in classrooms and laboratories, the level of faculty members, the number of winners of the regional, all-Russian and international Olympiads, competitions, conferences among students, in the percentage of employed in the specialty - this is in the department Dmitry Livanov, for some reason, no one remembered ... A pity. Frankly sorry.

But they remembered another criterion: university income. No - no one argues that the profitability of an enterprise is an important aspect of the development of an innovative economy, but somehow it is not entirely correct to transfer education and science exclusively to the business. After all, it is obvious that a university that trains specialists in the study and methods of oil and gas production, designing rocket technology, and programming has much more chances for a high income than a university, which prepares philosophers and poets. Well, unless of course, the rector does not go for the delivery of buildings for rent for storage facilities, shopping areas or saunas with the provision of services from the students (students) themselves. Apparently, it is precisely to this that the Ministry of Education and Science is pushing university leaders ...

However, the “list of ineffectives” is far from the only controversial point in the work of the Ministry of Education and Science and Minister Livanov directly. Very serious consequences were made by Dmitry Livanov, saying that every student can come to school practically in what he wants, and therefore wearing some hijabs by some schoolgirls of Stavropol is quite normal. After this, President Putin had to speak out, who said that the introduction of a uniform school uniform for all regions of the country could solve the problem. This statement by Vladimir Putin clearly showed that the position of Minister Livanov, to put it mildly, does not quite fit in with the norms of secular education. After all, if the minister was going to allow hijabs, then the next day girls in the burqa could appear in schools, and boys, for example, with black Islamist headbands. The author, of course, exaggerates, but ...

Not add optimism in terms of evaluating the work of the Ministry of Education and Science as well data on the misuse of funds. The Accounts Chamber uncovered facts that indicate that 366 million rubles have “evaporated” in the ministry over the past three years. Not the scale of Oboronservis or RCS, of course, but the money is also not small ... It would seem that the beginning of the misuse of budget money fell on the time when the ministry was headed by Andrei Fursenko, but it is alarming that not the main People in the Ministry of Education and Science yesterday, and representatives of the Accounts Chamber today. It turns out that if it were not for the audit, the money would continue to disappear.

And here, on the horizon, the adoption of the draft law “On Education”, which is actively promoted through Parliament, looms in the second reading, although many representatives of both the deputies' corps (for example, Oleg Smolin - the author of the alternative bill) and the pedagogical public express bewilderment about the whole a number of "innovations".

“Military Review” clarified the position of the Deputy Chairman of the State Duma Committee on Education, Vladimir Burmatov, regarding the draft law being adopted, as well as the new Federal Educational Standards. Deputy Burmatov chose to declare that the responsibility for developing new generation standards lies with the Ministry of Education and Science of the Russian Federation:

“GEFs have long been developed by the ministry. They are still Fursenko signed. We didn’t participate in the process - the topic is exclusively Minobra. ”

Based on this, it turns out that the Ministry of Education in Russia is a kind of self-sufficient unit steaming in its own juice, and Minister Livanov simply continues to implement the ideas of the previous minister and work, let's say, by inertia. Only in this case it must be remembered that this phenomenon very often leads to sad consequences. To stop and rethink the work done is also necessary, at least occasionally ...