The bankruptcy of Kharkov "Malyshev Plant": who benefits? 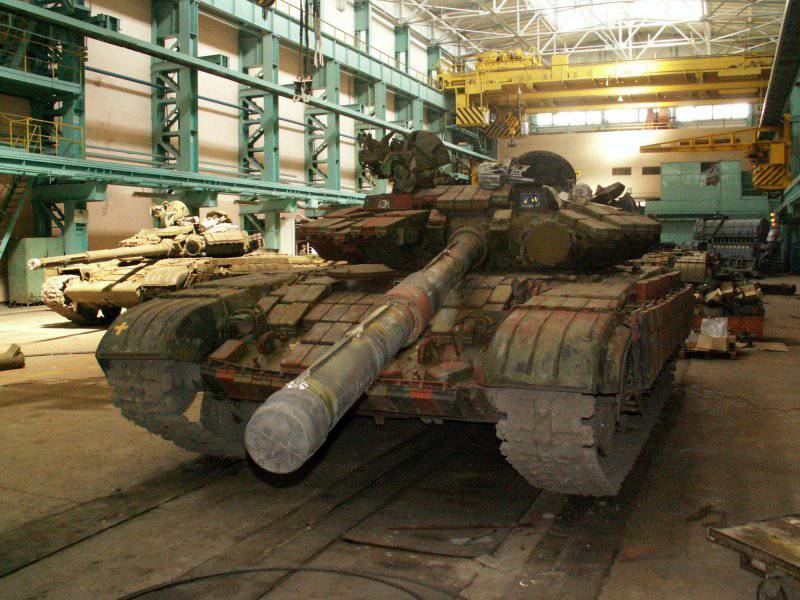 At the beginning of November of this year, the Ukrainian courts launched the bankruptcy procedure of the enterprise, which is one of the largest manufacturers of military equipment in the entire CIS - the Kharkov Malyshev Plant. According to experts, there are several explanations for such actions. First, it makes sense to say that Ukraine has decided to withdraw strategic enterprises from under direct state control. Secondly, it is also possible to say that the concern “Ukroboronprom”, to which this enterprise belongs, is trying in this way to solve its financial problems. If there is a second version, then the claim of the contractor of the Plant named after Malyshev, which is the Lviv armored plant, and which the company owes about 75 million dollars, can be considered just an excuse to start the bankruptcy procedure. How events will develop in the future is not yet completely clear. According to some experts, the plant will be transferred to a private owner, and according to another part, the privatization procedure is impossible due to certain objective reasons.

The first version is partly confirmed by some Ukrainian print media, which cite the words of Petro Poroshenko (Minister of Economic Development and Trade) as evidence of the viability of this version, who announced a month ago that defense industry enterprises should be privatized. Among these enterprises, the minister named the “Malyshev Plant”.

However, such an initiative was not supported by the government. So, according to security expert Alexei Izhak, the debt to the Lviv enterprise does exist, but you can’t say with a great deal of confidence about the time of its occurrence. This enterprise only carried out repair work and modernization tanksHowever, the main executor was the Kharkov plant. At the same time, the Malyshev factory does not receive any significant dividends from the export of military equipment. The last large-scale contract that the company carried out was the supply of tanks to Pakistan in the 90s. The main order is currently reduced to the modernization of Bulat tanks for the Ukrainian army, as well as the supply of engine parts for China, Pakistan and Egypt. Deliveries of the BTR-4 to Iraq were carried out until recently by the Morozov Design Bureau, and preparation for the serial production of this equipment at the Kharkov plant was carried out only this year. In addition, certain problems exist in terms of deliveries of Oplot to Thailand, which are associated, first of all, with the fact that the enterprise does not have enough capacity for serial production of equipment.

All these financial problems, according to A.Izhak, led to the concern “Ukroboronprom” attempting to carry out a law on writing off the debts of defense enterprises, but this initiative did not find support. Concern, as the expert notes, last year earned more than 1,5 billion dollars, thus, it could solve the problems of unprofitable enterprises on their own. At the same time, in 2012, several laws were passed on debt cancellation, as well as on the provision of benefits and subsidies, including the Kharkov plant. These funds were used to pay off wage arrears. But to prepare the mass production of tanks "Oplot" money is not enough. But the prospects for the plant in this direction are very good - a contract was signed for the supply of these tanks to Thailand, in addition, the contract for the delivery of Iraqi BTR-4 to Iraq was extended. The order book of the Malyshev plant is currently estimated at 3 billion hryvnia (about 370 million dollars). And only the lack of money slows down the whole process.

Alexey Izhak also noted that for the period of the newest stories plant bankruptcy proceedings started for the seventh time. Therefore, it is safe to say that the Ukrainian government will not allow privatization to be carried out for a penny, and all the more so that the plant will be sold in parts in the future. This company is too important for Ukraine. At present, a state ban on privatization is being maintained with respect to the Kharkov plant. The norms of the current legislation suggest that during the bankruptcy procedure, the company cannot apply the liquidation or rehabilitation procedures. In addition, the concern "Ukroboronprom" announced that it intends to ensure the break-even point of the enterprise in 2013. Thus, the whole bankruptcy procedure looks like a way to restore the solvency of the plant.

Privatization of defense industry enterprises is quite common in world practice, and there is nothing terrible or reprehensible in this. But as for the plant named after Malyshev, then, according to Izhak, there is no talk about this yet. All efforts are aimed at improving the financial situation of the company, and the bankruptcy procedure was chosen as a tool only because neither the state nor the group currently has the necessary funds to pay off debts.

Similar allegations can be heard from the mouth of a military expert, former military man Alexander Manachinsky, who is convinced that the whole problem arose due to insufficient state control and funding. He is extremely negative about the process of privatization of defense enterprises, saying that currently there is not a single private defense enterprise in the country that could demonstrate great success. The expert cites as examples the Nikolaev shipyards, which were privatized, but instead of development, they gradually fall into decay.

Regarding bankruptcy procedures - a retired colonel says that due to the presence of significant contracts for the export of equipment, this situation does not look very convincing, because the company is a state enterprise and in the case of fulfillment of obligations under contracts it should be profitable. Therefore, Manachinsky is convinced that defense industry enterprises, especially such a powerful enterprise as the Kharkov Malyshev Plant, should have the support of the state. This not only has a great impact directly on the status of the state, but is an indicator of its real economic opportunities and can affect the development of partnerships.

It is necessary to say a few words about the fact that businessmen are extremely interested in the privatization of the Kharkov defense enterprise. As you know, the Minister Poroshenko controls the enterprise "Leninskaya smithy", which produces military boats. But Poroshenko is not the only entrepreneur who will qualify for the Kharkov plant. It is even possible the emergence of external investors.

"Plant named after Malyshev", in addition to the production of a large range of military equipment, including tanks T-84 "Oplot", BTR-4, BTR-3, "Dozor-B", is also engaged in the production of equipment for oil and gas and coal mining, transport and heavy products mechanical engineering. This is what makes the company attractive in the eyes of potential investors and Ukrainian oligarchs.

However, even if a part of the capacity of the Malyshev Plant will be reoriented towards the production of non-military value, this is far from the main problem. Increasing the range of products by increasing production volumes and focusing on the production of peaceful goods is a very common practice, which only contributes to improving the efficiency of the enterprise. But this happens only if the company is under state control. If it is transferred into private ownership, you should not think that this enterprise will immediately bring profit, will actively develop and increase production efficiency. First of all, in order to pay off debts, serious cash injections will be required, then to modernize production, to provide new jobs and to conclude new contracts. Thus, in the end, it may turn out that the company, which was in the process of bankruptcy, after transfer to private ownership, will become even less efficient.

At the same time, one cannot say that private entrepreneurship will not be able to organize the effective work of defense enterprises. There are many examples of how defense enterprises transferred to private hands function successfully. Unfortunately, almost all of these enterprises are Western: the German company Krauss-Maffei Wegmann, the American Chrysler Group LLC, the British BAE Systems plc, the French concern GIAT Industries. All these enterprises produce high-quality equipment, having an established network of suppliers and interacting with government agencies. But do not forget that the economy of the countries in which these enterprises are located is developing in a healthy market, which in Ukraine does not exist. Moreover, when it appears and begins to develop is unknown.

Thus, at present, there are two ways to solve the problem for the Malyshev Plant. If the concern "Ukroboronprom" is able to solve all the financial problems of the enterprise and to establish the mass production of military equipment, this will enable the plant to have great prospects for further development and conclusion of new contracts. If the enterprise is privatized, its development will depend on the effectiveness of financial recovery and the establishment of mass production of the BTR-4 and Oplot tanks. But at the same time, privatization will cause the need for legislative changes and lead to the restructuring of Ukroboronprom.