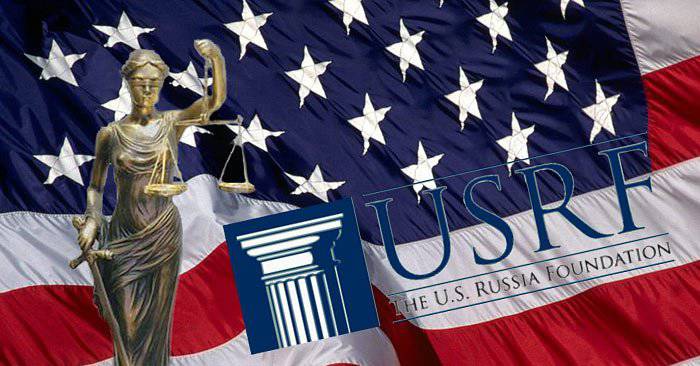 Daria Mitina: while the authorities are looking for the opposition’s ties with the State Department, the Russian judicial system actively cooperates with American NGOs

There are plenty of examples of suspiciously close friendship between Russian officials and deputies with American non-governmental organizations. So, after the legislative restriction of foreign NGOs, it miraculously turned out that the main victim of this decision was the United Russia party. Much less information in open sources can be found about contacts with American NGOs of institutions of the third branch of the Russian government - the judiciary.

The Foundation for Economic and Legal Development with the symbolic name USRF (divide the abbreviation in half and decipher what happens) comes into our field of view not the first time. The foundation’s activities are controlled by the State Department and the US Congress - the foundation reports directly to them. Foundation President Mark Pomar calls among the priorities “ensuring more open access to the work of the judicial system and strengthening it through changing it”. This vague formulation, of course, includes compiling databases of Russian law schools and recruiting activities for pumping out the best brains - the foundation cooperates directly with the Moscow State Law Academy, Siberian Federal University, Kazan Federal University.

This year, together with the Foundation. Yegor Gaidar announced a program for students, lawyers and economists who have been trained in the United States. Over the past two years, the foundation has allocated more than 17 million dollars to "build a civil society" in Russia. In principle, student exchanges are common practice, nothing reprehensible. "Cooperation in the development of new educational standards," declared the foundation's priority, seems to be a more than dubious idea - the Russian and American legal systems are too different, and the possibility of bringing them closer, and most importantly - the need for Russian judges to be judged by American ethical standards, to put it mildly, is not obvious. However, if we look at how heavy artillery sits on the board of directors of the fund, it becomes clear that such a stellar company is hardly limited to such small things as work with students.

On the US side, its chairman James Collins sits on the board of directors (remember, right?), Stephen Beagan is the vice-president of FORD, Craig Kennedy, the head of the German Marshall Foundation. These representatives of American large corporations have excellent connections with Condoleezza Rice, who are very democratic, and when it comes to Russia, they are very archdemocratic. The fund’s curator is the 80-year-old Senator Lugar, who has gone through regular elections, whose senatorism will end in 2013, but the desire to continue to control the millions of dollars allocated by the US Government for "democratic changes in Russia" has not disappeared.

On the Russian side, the foundation is run by far more familiar and dear ones to us. The leader of the Support of Russia and the activist of the Kudrinsky lobbyist Committee for Civil Initiatives, Sergey Borisov, for example. Or the main lawyer Deripaskin "Russian cars" Alexander Shibanov. Yes, and other names are sent to Gaidar-Chubais-Gref-Kuda libertarium.

“... in 2009, the foundation tried to establish relations with the Russian Academy of Justice, the Supreme Court and the Supreme Arbitration Court (EAC). The first two refused to cooperate - funding projects at the expense of the fund is contrary to the principles of the judiciary. But YOU did not refuse to contact with the USRF ... their joint activities are held under the auspices of USRF financial injections. "

The Chairman of the High Court of Arbitration, Anton Ivanov, is an extremely remarkable person. A St. Petersburg lawyer was appointed to YOU ​​with a terrible scandal, because he managed to drag all his friends and girlfriends with him. In 2010, his young friend in cigar parties, Dmitry Pleshkov, was appointed to the general's office as Chairman of the Moscow Region Arbitration Court, becoming a major general in 27 years. The appointment of the young man was so outrageous that resignation loomed in front of Ivanov, but the topic was quickly covered up - some vague but high connections helped.

The chairman of the Supreme Court of Arbitration, Mr. Ivanov, likes to place in his credit the increased transparency of the work of the judicial body he heads. That's right, transparency has multiplied. But that's not for Russian citizens, but for American ones. What difference does it really do? .... The subject of Ivanov’s pride — the Electronic Judicial Proceedings program at the Supreme Arbitration Court (broadcast of meetings, publication of all decisions in open access) —was created for some reason with USRF money. The head of the Supreme Court of Justice revealed to Americans the secrets of arbitration justice in Russia, lobbying at the same time the spread of "electronic court proceedings", and at the same time American influence, from the Supreme Court of Arbitration to the system of courts of general jurisdiction.

Starting from 2013, the Patent Court initiated by Anton Ivanov will work in Russia, which will include both claims considered in arbitration courts and intellectual property disputes, which are currently being considered in courts of general jurisdiction (that is, outside the sphere of control of Mr. Ivanov). In August, the chairman of the Patent Court on a non-alternative basis was the judge of YOU L. Novoselova. And in early September - what an interesting coincidence! - she entered into an agreement with the USRF on the training of judges for the Patent Court ...

If you think about it, the close mutual interest of the American and Russian state institutions can be easily explained. After all, by and large, the essence of the social system and the current United States and Russia is the power of corporations. And it is precisely the Arbitration and Patent Courts in the Russian Federation that should become the instrument of protection of corporate authorities.

It is not surprising that a strange fund has come under close attention in Russia - it is not yet clear whether the initiative bulk and other curious private individuals have bothered to study its activities, or it is our valiant bodies that merge the obtained information through the websites specially created for this business, but the copy-book here is quite funny .

First, it immediately catches the eye that the relationship between the Supreme Arbitration Court of Russia and the USRF foundation is much closer than it happens between the grantor and the grantee. Nevertheless, if you filter out personal chatter and the memories of correspondents about joint evenings held in New York and on the hospitable shores of the Potomac, I would advise you to pay particular attention to the letter of Judge Michael Meeme, in which he sets out in detail the essence of the agreements with Mr. Ivanov forms of cooperation. Extremely useful fiction.

Something tells me that what a Russian government agency is not digging, it will get about the same thing. I wonder what our security departments are communicating with their American partners? ..

Maybe, Vladimir Putin, who invented terrible aphorisms about “shakalyaschies at embassies,” first began to pay attention to the extensive international relations of classmates and classmates of their henchmen?