November 23, 2012
2
В previous article about pistols originally from China were considered the first options weaponsthat were made in this country. In fact, they were all nothing more than copies of better-known samples, some licensed, some frankly with ... copied without any permission to do so. But it could not go on forever, moreover, China's military industry was gaining momentum and developing, which resulted in a significant improvement in their short-barreled weapons, to the extent that it could already compete with European and American weapons models on the world market. In this article, and try to figure out how this happened, well, but the most obvious way would be a description of those models that were made. 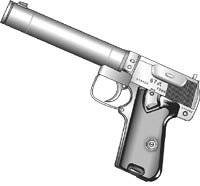 The last article ended on the description of the first silent Chinese pistol. He was far from the best, because he was very quickly modernized, or even redesigned, it can be said, although the basis remained the same. In the first place, complaints were caused by the size, weight and balancing of the weapon. To remedy this situation, it was decided to remake the device for silent shooting, which used to be a fairly complex structure and, although it was quite effective, was not worth the skin. The new Type 67 pistol received a CBE of an already classical form, that is, in the form of an ordinary tube. It is noteworthy that the designers left in the device of the device silent firing a grid rolled up inside to lower the temperature of the powder gases, although for the used cartridge 7,65х17 it was, one might even say, superfluous. In addition, the barrel of the weapon was shortened, since it had very little effect on the accuracy of firing. Thanks to these changes, the weight of the weapon and its weight were reduced, and the pistol itself received relatively good balancing, which was separately noted at the time of the adoption of these weapons. But the designers did not confine themselves only to eliminating the obvious shortcomings of the previous model.

The weapon received a fairly convenient fuse switch, which was located on the left side of the gun immediately above the pistol grip. Despite its rather large size, this switch had no effect on the convenience of carrying a weapon, and its use was really convenient. This made it possible to increase the rate of transfer of weapons to the combat position, and also increased the safety of circulation. In addition, it is also necessary to take into account the fact that the sound of the fuse switch was much quieter than sounds when sending a cartridge into the chamber, which is also important for a silent weapon. Speaking of noiselessness. For the sake of reducing the sound of a silent pistol as much as possible, it was not made self-loading. The weapon is recharged when the barrel bore is manually unlocked and the bolt is retracted, and after it is returned and locked. If we recall the other designs of non-self-loading silent pistols, then it is impossible not to note the whole simple genius of the Chinese designers. Instead of all sorts of perversions, they simply installed a locking element on the shutter in the form of a metal pin moving in the horizontal plane, protruding depending on the position on the right or left side of the weapon. This design allows you to really very quickly reload the gun, and most importantly, all this is done conveniently and without unnatural movements. To be honest, I would probably even recognize this pistol as the best among all the silent non-self-loading, if not for the very weak cartridge that is used in it, however, if there was a different cartridge, then the gun would be completely different, since it would change not only its effectiveness, but also dimensions with mass, and obviously not for the better. Unfortunately, guaranteed reliable data on the mass, size and other parameters of these weapons could not be found. 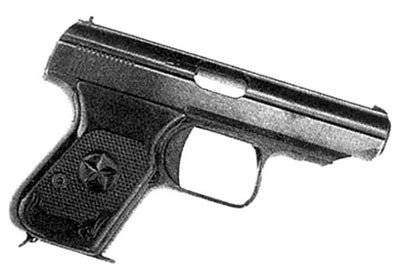 The next gun was also created to replace the initially not the most successful weapon, namely the Type 64-1 pistol. It was developed in 77 year, whence its name is Type 77, but this gun came into service only in 1978. This sample of weapons, as well as its predecessor, is primarily a weapon of army and police officers. It is compact enough, convenient for concealed carrying, but it uses far from the most effective cartridges, namely Type 64, which were used in silent pistols. At first glance, the weapon seems to be the simplest, but behind the simple appearance there are quite interesting moments that make this gun unique in its own way. But first things first.

Due to the fact that the weapon uses a rather weak ammunition, its automation is built according to the scheme with a free gate. The trigger pistol trigger, non-self-cocking, the trigger is hidden. On the one hand, such a solution does not seem to be the best, if it were not for one feature of the weapon, namely, Khylevsky's device, which allows you to pull the bolt back with the hand holding the weapon. It is made in the form of a movable part of the safety bracket, and, strange as it may seem, it is very convenient for use, mainly due to the small dimensions of the weapon. On the right side of the pistol there is a safety lever slightly behind the pistol grip, which is not very convenient, but this is compensated for by the possibility of cocking the weapon with one hand, and the partial absence of the bolt hold delay is compensated by the same. In general, the gun was quite interesting and easy to use, which was highly appreciated by those who were lucky enough to become the owner of the weapon. 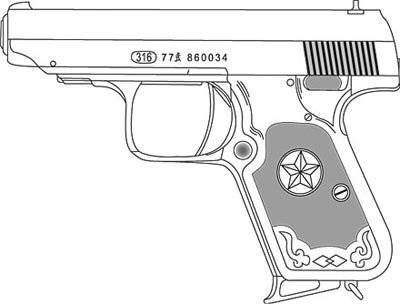 In fact, the gun was not one, but two, they differed among themselves in the capacity of the store and slightly in weight and dimensions. The first version of the weapon contained cartridges in his 8 shop, had a length of 153 millimeters, with a barrel length of 88 millimeters, its weight was 580 grams. The second option was apparently customized to a specific standard, its length became 148 millimeters, as a result, the barrel length was reduced to 86,5 millimeters, the capacity of the store became 7 cartridges, and the weight decreased to 530 grams. The thickness of both models was 18 millimeters. All this has a positive effect on the hidden carrying weapons.

What was used in this weapon turned out to be a really very good combination of various solutions, so it is not surprising that the Type 77 was further developed, already in the form of the Type 77B model. Actually, this model can rightfully be considered a “turning point” in stories development of the Chinese short-barreled weapon, and it would be necessary to begin the following article with it, but an obvious relationship with the previous versions of the weapon does not allow this. First of all, it should be immediately noted that, finally, the Chinese began to use high-grade ammunition, namely the cartridge 9х19. The new pistol for this cartridge already had a relatively modern appearance, despite the fact that it was released at the beginning of 80's, and one can even say that it was a good competitor to other weapon models. Although it had its drawbacks, but it was completely Chinese. 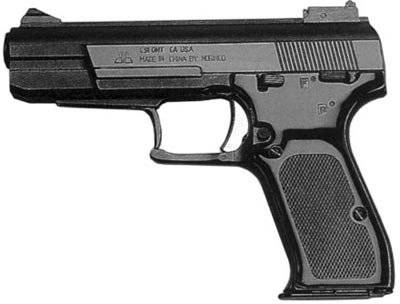 The main problem that confronted the designers was the adaptation of the solutions that were used in the Type 77 for a new, much more powerful ammunition. There was nowhere to copy, and there was no experience in building weapons with more complex automation schemes than a free-gate scheme. Nevertheless, the result was very good. Go along the beaten track and use the automation scheme with a short stroke of the weapon did not allow the desire to leave the main feature of previous models in the gun, namely the Hylevsky device, for the convenient operation of which the force during retraction of the housing-gate should be insignificant. The solution was the automation, built on the principle proposed by Barnitsk. This system worked as follows. Immediately behind the chamber in the barrel of the gun was a hole for removal of powder gases from the barrel. Powder gases from the barrel fell into the cylinder, but did not move the casing-bolt, as is customary, but on the contrary, they did not allow it to move. Thus, when fired, the pressure in the barrel bore and in the chamber under the barrel was approximately the same, and the shutter could not overcome it in order to roll back freely. As soon as the bullet left the barrel, the pressure dropped sharply, and the shutter-casing was finally able to move. Such a truly ingenious solution of the designer allowed the Chinese to do the virtually impossible, namely, to combine the Khylevsky device and a sufficiently powerful ammunition, without losing the ease of operation of the weapon.

By itself, the gun turned out to be quite medium in size, but the mass of weapons fails and strongly. The length of the gun is equal to 190 millimeters, the length of the barrel 127 millimeters, and the weight without ammunition is equal to 1,1 kilogram. Subsequently, this weapon was offered for export, and there were several options. NORINCO NP20 had a simple safety bracket, without a Hylevsky device with a single-row 9 magazine for cartridges, and there was also a 24 model that had a two-row 15 magazine for cartridges, adjustable aiming devices and an automatic firing pin guard. As well as the original pistol, the export versions had a single-action hammer-type trigger mechanism with a hidden trigger.

In this way, unexpectedly from the frank G, Chinese pistols have become a truly unique and interesting weapon. I think that this article will convince those who said that the Chinese have tight pistols, but this is only the tip of the iceberg, then it will only be more interesting.