November 23, 2012
179
At the end of November, an appraisal of the budget management in the United States Congress of the future BMP created under the Ground Combat Vehicle program, which will replace the Bradley BMP at the combat post, was issued. The mass of the new machine will be greater than the mass of the main tank. So, it weighs 1 times and 1 times heavier than the Russian T-1.3 than the M1.8A90 Abrams.

The future GVC BMP, which will begin to enter service with the American Armed Forces in the coming years, will be not only the most secure machine, but as a result, the heaviest. GVC will be the main BMPs used in future military conflicts involving the United States and NATO members. 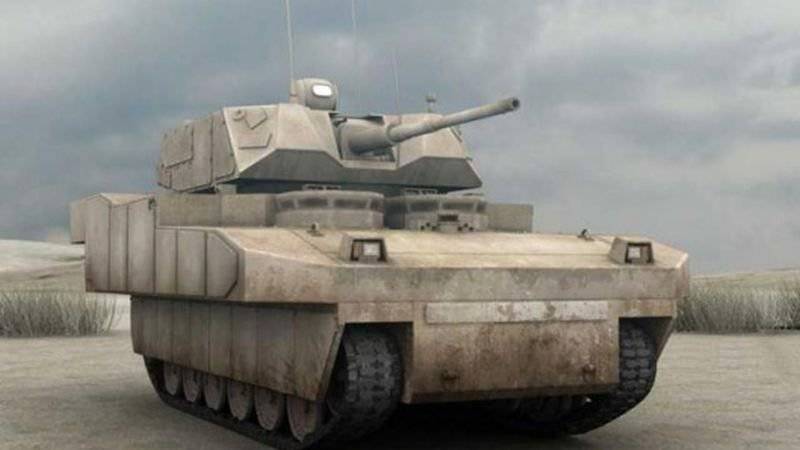 The weight of the GCV, more inherent in tanks, is explained by the need to ensure the main priority for such machines - to protect the crew and the machine from mines and mine decisions. You should know that the GCV mass is “gaining” mainly from modern complex high-tech solutions, and not just from the installation of thick-walled armor.

Protective systems will be installed according to the “onion” principle; armor plates will play the role of the last line of defense. The machine will be maximally protected from all sides, without exception. According to the project, the protection will be provided by the following solutions - early detection of probable targets, proactive fire, jamming, active protection. Active defense will be responsible for countering missiles and various types of grenades. The last will be involved armor protection, which will stop all types of ammunition, burst through the main defense. What will be the whole complex of protective systems, until it is not fully defined, it is possible that protective solutions that are currently being successfully developed will be used.

Today, the date of the first arrivals of the latest BMPs is announced - the beginning of 2018 of the year. The total number of machines required is 1800 units. Mass production will allow purchasing BPM at a cost of 13 million dollars. They will enter into service with the US Armed Forces and replace the Bradley infantry fighting vehicle on a combat position. They will replace about half of the entire Bradley Park. The new "GCV" will be able to ensure the safe movement of troops into the 9 people. 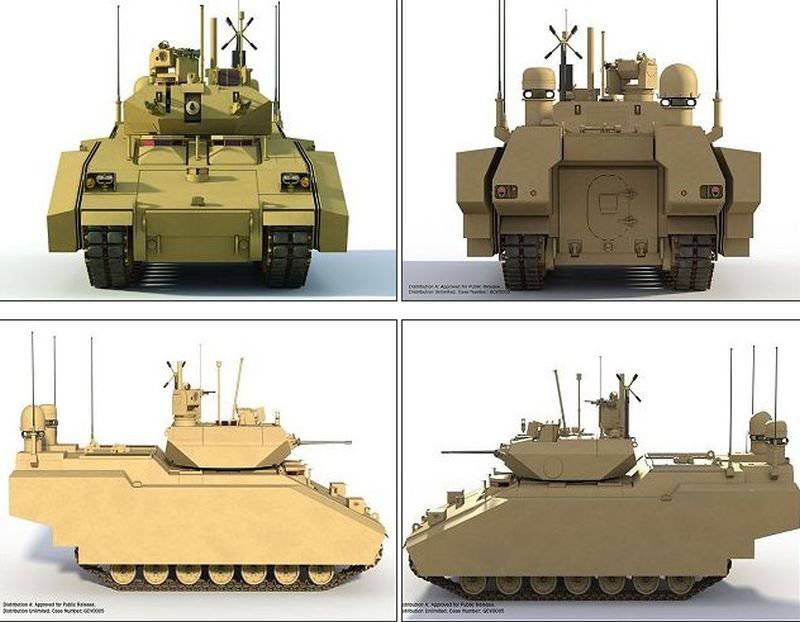 This performance is quite controversial, it has its pros and cons. The minus is a large mass of a car ready for battle, because it will become a big problem for ensuring maneuverability when making a march, passing through water and free-flowing barriers. For example, in recent times, US military units have been involved in military conflicts in countries with a rather hot climate, where the terrain is characterized by a sandy surface or a rocky, almost impassable surface. The advantages include the reduction of the required number of vehicles required for military operations, which will reduce human losses. This approach was successfully applied in Iraq and Afghanistan. It does not make sense to paint all the pros and cons - every decision has its supporters and opponents, the main thing is that such decisions do not lead to a negative result, an increase in value and a decrease in the main characteristics.

The customer, represented by the armed forces of the United States, is willing to spend at least seven billion dollars on the development of the “Ground Combat Vehicle” program in the coming years. However, the uncertainty in the technical parameters creates a certain confusion for its development. The program for the creation of the BMP has repeatedly stopped and re-started. The total cost of all programs and developments has long been calculated in billions of dollars, and the finished optimal machine has not been provided. In 2010, the customer requested to create a demo sample. The program was attended by three teams led by “SAIC”, “BAE” and “Northrop”, “General Dynamics”. However, concerns about the exorbitant costs of the program are closing it.

At the end of 2011 of the year, according to the new requirements for infantry fighting vehicles, its development begins in a new way. The main requirements - 2-3 of the year is allocated for development, seven years for the development of the production cycle. The cost of one copy should be at the level of 10 million dollars with operating costs per mile of no more than 200 dollars. After approval of the project, two production contractors will be selected who will compete until 2017. The design and start-up phase is scheduled for 2013 year. Perhaps the new BMP will be assembled at the production facilities of the latest modification of the Bradley and the main tank Abrams. This will help reduce the overall cost of developing the production base and mass production. In addition, the new BMP will be based on the technology of creation and production of Abrams and Bradley. It is possible that at this phase of program development, the weight characteristics of the BMP will be revised. The customer asks developers to find engineering compromises to ensure maximum protection and weight characteristics. But recently there has been a tendency to increase the weight characteristics of manufactured military equipment, the examples being the same "Abrams", "Bradley" and "Strikers". Probably, the ability to install hybrid drive systems will be able to provide the American BMP with the installation of all the necessary systems, equipment and weapons without regard to the weight characteristics.

Accepted development of the new BMP will move into the second phase of the program, where the design of a new generation of common platform will begin. It is possible to implement the phases of the program in parallel, to reduce costs. In the meantime, there is a high probability that the development of a new BMP will again be stopped due to the high material and financial costs. 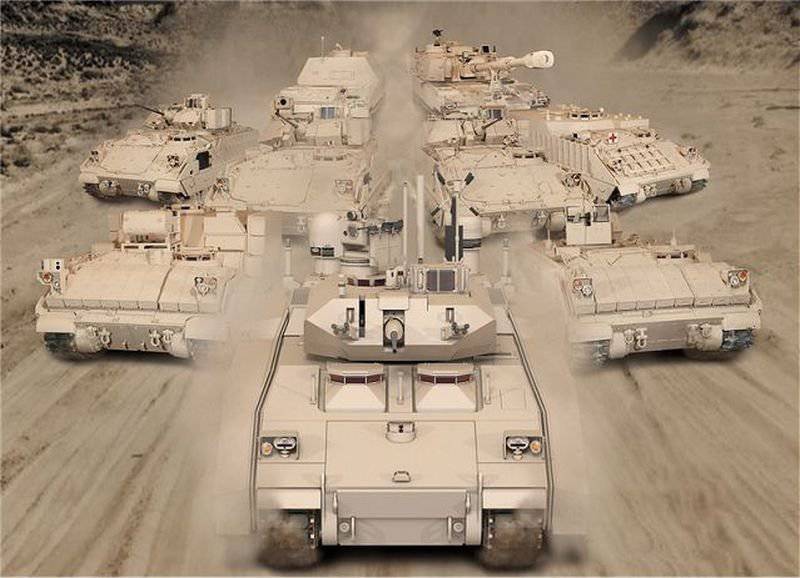 View
On the Internet, you can find the views of military experts, who believe that the mass of the car in 84 tons counted on the American system. So, in certain conditions of counting one ton can be equal to 0.907 kilogram. If we proceed from this, the new BMP weighs in the range of 60-75 tons and is equal in weight to the Abrams tank.

As follows from the statements of the developers, the machines will be provided with a previously unused system of electric drives of the hybrid type. If the customer is satisfied with this system, then, in principle, the latest BMP can be created without weight limits. The applied systems will make the GCV more powerful, economical and functional than similar 70-ton machines.