Fergana Valley: what does an American colonel write about

November 27, 2012
27
On the American website eurasianet.org, which is related to Mr. Soros, the other day an article by Joshua Kuchera (Washington) appeared, which is a commentary on the report of Colonel of the Military College of the US Army Ted Donelly. The report of the military is devoted to the possible development of the situation in the Fergana Valley after the US and NATO troops are withdrawn from Afghanistan. Well-known analyst Alexander Shustov, after analyzing the text of the report and commentary to it, made a conclusion: Americans are not going to leave Afghanistan, but, on the contrary, expect to gain a firm foothold there for a long time. 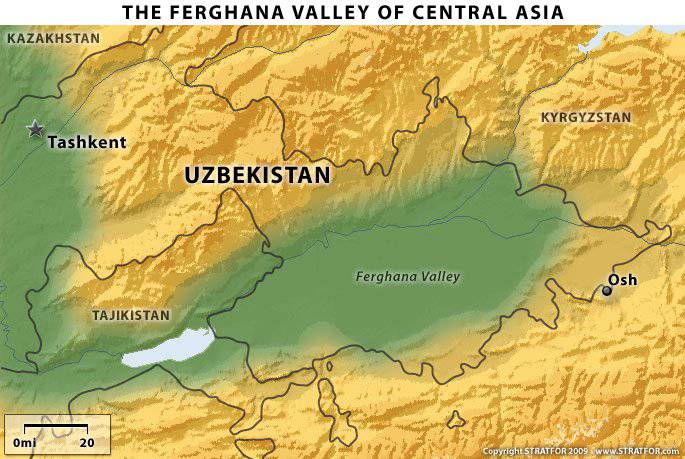 In addition, the publication of the Donnelly report, as well as the lengthy commentary of a Washington journalist, led the analyst to a number of other reflections. In addition to maintaining their presence in Afghanistan, the United States probably intends to open a military base on the territory of Uzbekistan, which will work, for example, “under the roof” of the Transit Transportation Center: after all, plans to deploy special forces in the countries of Central Asia that will be engaged in ensuring the Northern network supply, the United States said more than three years ago - in September 2009 th. At the same time, the “program” in the Fergana Valley will be one of the keys to destabilize the region, and, consequently, Russia. (Not for nothing, add on my own, in the magazine «Turkish Weekly» express themselves considerations about the fact that, in the opinion of Western military experts, Moscow is expanding its radio intelligence programs in the Fergana Valley). Alexander Shustov therefore believes that the steps being taken by Russia to preserve and strengthen its military presence in Kyrgyzstan and Tajikistan look absolutely necessary against this background.

Let us turn to the report to Mr. Donelly.

As is common with US strategists and tacticians, the colonel of the US Armed Forces Donelly states that the Fergana Valley is about to become a stronghold of terrorists - similar to what the tribal area of ​​Pakistan has become (“Territory of Federal Government Tribes”). Having made such a “sharp” statement, Mr. Donelly immediately called on Washington to actively develop local security cooperation in order to protect the region from the dangers of terrorism. The goal is very noble and extremely democratic.

In order not to stagnate on American values ​​alone, Mr. Colonel moved from the spiritual to the material. More precisely, to the military strategic. in the report noted:

“The region of Central Asian states since 2001 has played an important supporting role in Operation Enduring Freedom.” However, the current US military strategy is focused on the region only in the context of its operational significance attached to this operation. Inability to look at this region through the prism of a longer-term strategic perspective jeopardizes the process of achieving success in Afghanistan after the withdrawal of international coalition troops, negatively affects the security and stability situation in the region and increases the likelihood of re-engagement of the US in the region’s affairs, and on the most undesirable conditions. ” .

And once the conditions can be “undesirable,” America must plan the outcome that will be convenient and beneficial for her. Having mentioned terrorism, Donnelly finds arguments that extremist groups, like the Islamic Movement of Uzbekistan, will definitely take advantage of the withdrawal of American troops from Afghanistan. The Americans will leave, and the terrorists will instantly establish themselves in the Fergana Valley: after all, the borders of Uzbekistan, Kyrgyzstan and Tajikistan cross this densely populated area.

Here, the colonel draws a parallel with the tribal zone of Pakistan, into which the Fergana Valley may well turn after the 2014 year.

“... Like the tribal zone, the future Fergana Valley will be a significant unmanaged territory, which will serve as a refuge, an incubator and a springboard for armed extremist groups and militants. The IMU and other extremist armed groups will begin to use this shelter, as well as their new rear areas in Afghanistan, to increase pressure from the Islamist rebels on the secular governments of Central Asian countries. ”

America must actively counter this threat. And donelly explains how. However, the colonel's proposals are not concrete.

He states that the Fergana Valley (“a strategic center of attraction for the region”) should be the centerpiece of a promising strategy, and stabilizing the situation here (meaning preventing any militant activity) is the first task for the United States. The first, he notes, and not just an integral part of the task with respect to the territory "where our bases are located and along which our supply corridors pass."

The colonel proposes to ensure the military component of security cooperation. In this context, Donelly proposes to invest in the strengthening of borders and the adoption of barrier measures to isolate the valley from the militants operating in Afghanistan. He also points to counter-terrorism measures that can be taken by units engaged in the fight against militants in the Fergana Valley and in the adjacent territories. A corresponding counter-narcotics activity is also needed, which will help stop the channels of financing extremist groups. At the same time, the colonel writes about the "liquidation of the consequences of various disasters", perhaps hinting at the likely Russian construction in the region of hydropower plants, as we know, not approved by seismologists from Nevada.

To avoid hostility and the strategy was not so costly, Mr. Donelly offers to connect Russia and China to it.

“... The United States should promote the idea of ​​connecting Russia, China, the SCO and the CSTO to the implementation of this regional strategy ...”

However, the Colonel of the US Armed Forces is a realist and does not count on Russia’s special assistance. He even talks about probable "resistance." However, the Russian-Chinese approach may have a “political, diplomatic and informational application.”

Journalist Kucera, commenting on the report, states that Donelly’s recommendations will not be implemented. Why? The journalist does not speak directly, but between the lines is read: the economic crisis. Obama is not in a hurry to go to Central Asia or to other places far from America. Hegemony is hegemony, and 16 with over trillions of dollars of debt is not a joke, no matter what the Fed specialists say and no matter how stable the convertible dollars are. The driver writes:

“... I argue the opposite: that the development of these programs is a direct consequence of the need for access to Afghanistan. So when the need for it disappears, I suspect that these security assistance programs will also be curtailed. In general, the United States is less and less willing to take part in some military aspects in remote corners of the world ... "

Meanwhile, the journalist shares the danger of extremism in the Fergana Valley with Donelly.

Let us ask ourselves a question: why does American Colonel Donnelly care so much about the Fergana Valley, if at the end of 2014, the United States must withdraw its troops from Afghanistan? Why talk about large strategic programs? Is it really so agitated the colonel activities of the Islamic Movement of Uzbekistan? Since when are the Americans, the ideologists of the “Arab Spring”, admirers of the theory of controlled chaos and the fathers of destabilization, preoccupied with Islamism near the borders with Russia? Yes, let it seem to be getting stronger!

Analyst A. Shustov believes that Donelly’s concern about the order in the valley and the local population is in line with the concerns of the US military regarding the operation of the Northern Supply Network: it is through her that the American forces in Afghanistan receive most of the military cargo. The main transit goes through Russia, Kazakhstan and Uzbekistan, some deliveries are made through Tajikistan.

If the channel is blocked by the Islamists, the ISAF in the Hindu Kush will be isolated. This is what worries T. Donelly. He, Shustov writes, believes that Washington views Central Asia solely as a platform for ensuring actions in Afghanistan. This is not to say that the Fergana Valley is the “key” to the whole of Central Asia. Today there are the Sogd oblast of Tajikistan, the Osh, Jalal-Abad and Batken provinces of Kyrgyzstan, as well as the Uzbek Andijan, Namangan and Fergana provinces. Along with the lack of water and high population density, this area is also characterized by a high level of Islamization. In fact, the Fergana Valley is a powder keg of Central Asia. Bring just a match ...

Why should the United States stay in Afghanistan? Neither Kucera nor Colonel Donelly write anything about this. And in vain. They would reinforce their hypotheses, theses and democratic conclusions with some figures - the report and commentary would become clearer.

The fact is that only for the current year, according to the report of the UN Office on Drugs and Crime, on the Afghan fields Was collected 3.700.000 tons of opium poppy - raw materials for the manufacture of heroin. THREE MILLION FAMILIES THOUSAND TONS. Compared to 2011 year, the acreage increased by almost 20% - from 131 thousands of hectares to 154 thousands. Today, four fifths of the total world crop of opium poppy is removed in Afghanistan.

Leave such plantations American makoroby not going. Especially at a time when the economic crisis is rampant in the world. That is why Americans need to gain a foothold in the Fergana Valley, thereby ensuring constant transit and marketing of the finished product.

When the Colonel of the US Armed Forces speaks about anti-drug trafficking activities, he seems to hint at a desirable monopoly for those who export “legally” heroin ...