November 22, 2012
45
Currently, the Russian army and security forces have several types of vehicles for the transport of goods and passengers. Recently it became known that this wide range in the near future will expand the family of machines that can replace several previous ones.

According to the Chief of the Main Automobile and Armored Directorate of the Ministry of Defense, Major General A. Shevchenko, technical requirements have already been developed for a promising vehicle for our armed forces. The finished vehicle will be put into service as early as 2015. Such a short development time due to the fact that domestic auto enterprises already have a number of developments that will be useful in the development of the finished car. Obviously, these developments are directly related to the basic requirements of the GABTU. 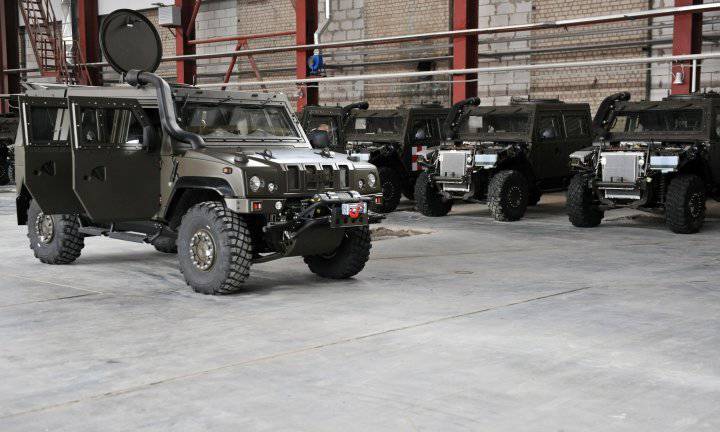 The new army vehicle, according to Shevchenko, must meet three basic requirements. It must be mobile and have an average speed of movement on various surfaces of at least 45-50 kilometers per hour; lifting, down to the level of civilian trucks; as well as protected. The technical assignment implies the introduction of protection elements even at the level of building machines. From the factory conveyor cars should go with armored protection. Booking a prospective car should provide protection from both bullets and explosive devices, which makes it possible to classify it as an MRAP vehicle.

The appearance of reports on the development of a new car in addition to its exemplary appearance immediately attracted public attention. Regarding the prospective armored car has already expressed a variety of opinions, including quite sharp. For example, in discussions, the topic of licensed production of Iveco LMV (“Lynx”) machines, which is sometimes called unsuitable for the Russian army, both for technical and political reasons, “surfaced” again. Moreover, there was an opinion about the need for the earliest replacement of the “Ryysya” with new domestic cars. It should be noted that the head of GABTU did not specify the details of the technical specifications, primarily related to the curb weight and carrying capacity. Because of this, the thesis of an unsuitable “Lynx” may contradict the requirements for greater carrying capacity. It is possible that the Ministry of Defense wants to get a more heavy-duty armored car than the Italian-Russian.

In the context of ongoing disputes about “Lynx”, as well as recent events in the Ministry of Defense, an opinion emerged about a certain connection between the beginning of the development of a new machine and the change of leadership of the military department. Obviously, such an opinion hardly describes actual events. This general appearance of a promising armored car fits completely into the concept of development of military motor vehicles, approved in January, long before the resignation of the previous Minister of Defense, A. Serdyukov. In addition, the development of technical specifications for the project always takes a lot of time. Therefore, the date of the appearance of messages about the new project has nothing to do with the change of the military leadership of the country.

The words of General Shevchenko about the planned use of new armored cars can open the veil of secrecy over the approximate appearance of a future car. He argues that the new project will be able to provide the armed forces with trucks, passenger and intelligence vehicles. On the one hand, this clarification allows us to draw conclusions about the dimensions and mass of the new car, but on the other hand, the general basis for the cargo and reconnaissance armored vehicles looks at least ambiguous. Similar foreign projects with such capabilities usually represent light or medium armored vehicles with a limited payload in the cargo version.

If we are talking about a heavy multi-axle armored car, then, most likely, GABTU updated the requirements of the Typhoon program, or decided to create a new project based on it. Both existing variants of armored vehicles "Typhoon" are based on trucks and, as a result, have good indicators of the weight carried. Accordingly, such machines will perfectly cope not only with the transportation of fighters, but also with the towing of artillery guns, as well as other tasks of a similar sense. At the same time, it is difficult to imagine how a heavy and high armored car at the Typhoon base in the variant of the KAMAZ enterprise or the Ural Automobile Plant will carry out raids on the enemy rear near the front line. Of course, such a vehicle can carry 10-12 fighters with equipment and protect them from mines and shelling. However, such armored cars do not look similar to what is usually understood by the term “reconnaissance vehicle”.

While the state and appearance of the promising armored car's new project is almost unclear and causes a large number of questions, another vehicle of a similar purpose will complete state tests in the coming months. It is reported that the armored vehicle SPM-3 "Bear" during this winter will be tested in the conditions of the north of our country, after which relevant conclusions will be made about its prospects. It is noteworthy that in the design of "Bear" applied a set of measures corresponding to the concept of MRAP. It is possible that the developments on the project SPM-3 will be used to create a new multi-purpose armored truck.