Sell ​​and not lose: possible supply of Su-35 for China

November 22, 2012
44
In the context of the recent Chinese airshow China Airshow 2012, there were reports of a possible new contract regarding the supply of Russian aircraft. Some media outlets, citing sources in the Ministry of Defense and organizations involved in arms export, said that in the coming years, China will receive a number of the latest Su-35 fighters. Earlier there were reports of similar intentions by the Chinese military, but there was no official confirmation or refutation. In addition, supplies aviation Technology in China can have unpleasant consequences of an economic and political nature. 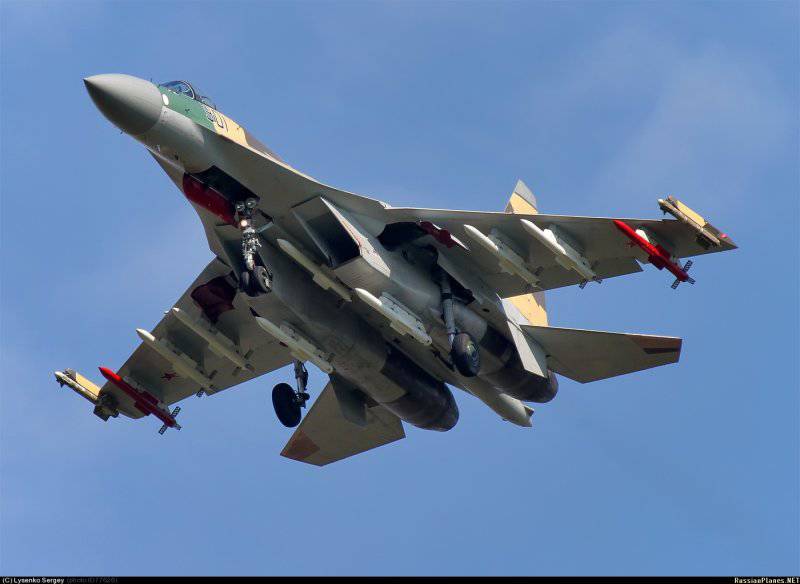 Last year, official Beijing has already offered Russia a deal concerning the supply of Su-35 fighters. However, then Russian officials responded with a sharp refusal. The fact is that the Chinese wanted to buy only four aircraft. According to Deputy Director General of Rosoboronexport V. Komardin, such a contract was not beneficial for our country. In addition, in view of the small number of fighters purchased, China was immediately suspected of unkind intentions. It is quite obvious that four aircraft will not be enough to equip even one squadron. At the same time, they are enough for careful examination and subsequent copying. Most likely, the possibility of copying was the main reason for the refusal of delivery.

In the spring of the current 2012, a number of media reported on talks about the Su-35. The number in the 45-50 units was then called. In the light of the orders of the Russian Air Force, this number of fighters no longer looks like an attempt by the Chinese to acquire a sample for copying. Now, as reported by the press, the estimated number of aircraft purchased is reduced to 24-x. According to the Vedomosti newspaper, the next negotiations on possible supplies will begin in the near future, and the signing of the contract will take place in the coming years. At the same time, Rosoboronexport and Sukhoi did not comment on this data. Therefore, information obtained by Vedomosti from a certain source in the Federal Service for Military-Technical Cooperation may look dubious

Nevertheless, there is still some likelihood of signing a contract. In favor of the version of future negotiations, for example, a quick visit to China of Russian Defense Minister S. Shoigu is given. At the same time, it was previously reported that one of the goals of the negotiations would be to resolve issues relating to the unlicensed production of equipment copied from Russian developments. The most famous case of this is the "creation" of the Shenyang J-11 fighter. Recall that in the mid-nineties, China acquired a license to manufacture Su-27SK aircraft. The contract included the delivery of sets of parts and assemblies based on the assembly of 200 fighters. Before 2003, 95 aircraft were manufactured jointly, after which China refused to continue further cooperation, citing insufficient Su-27SK characteristics. Nevertheless, the production of fighters under the Chinese J-11 index not only did not stop, but continued at a higher rate. As for the agreement on licensed production, it was not extended. Obviously, the first 95 aircraft were needed only to study and establish the production of "own" fighters.

And yet the Chinese could not completely repeat the design of the Russian fighter. They still have to buy turbojet engines of the AL-31 family. Among other things, these engines are one of the reasons for the protests: the Russian side reliably knows the number of engines sent to China, from which it is possible to draw certain conclusions about the production of J-11 aircraft. Judging by the past failures in the supply of new ready-made equipment, the Russian military, designers and officials are not too happy with the volume of construction of the former licensed aircraft. At the end of November, negotiations should begin between the Russian and Chinese commissions, the purpose of which is to resolve the issue of unlicensed production of aircraft. It is also possible that Russian officials will discuss with their Chinese colleagues the possibility of supplying the Su-35, but this has not yet been officially confirmed.

Thus, the leadership of the Russian defense industry now faces a difficult choice: either to sell new modern cars and make a profit, or not to get it, but also not to “earn” problems in the form of another contract break with the subsequent appearance of a foreign copy of their aircraft. At the same time, it would be most profitable for the country to simultaneously sell aircraft and at the same time in some way prevent them from being copied or reduce the risks associated with the latter. For example, the Russian side may insist on buying several dozen planes. Of course, the Chinese aircraft manufacturers will certainly try to reverse-engineer the purchased vehicles, however, if Beijing buys the 50-60 fighters, its aircraft industry will not receive anything other than knowledge of current aviation trends. Copying may simply be meaningless: Russia will transfer all the ordered aircraft before China has time to establish its own production. Recalling the troubles with the Su-27SK, it is worth noting the need to refuse to grant a license for the assembly. It is quite obvious that J-11 owes its appearance, first of all, to the documentation transferred to the Chinese. Without it, the "development" of this aircraft would be significantly delayed.

The second version of the development of events around a hypothetical contract, which implies both economic and military-technical benefits, is to create or offer a simplified version of the Su-35. It can, and even should, have less high characteristics in comparison with the Su-35С manufactured for the Russian Air Force. The essence of this approach lies in the fact that it will take several years for China to copy the machine without the appropriate documentation. During this time, the Russian Air Force will have time to acquire full-fledged Su-35С in the required quantity. As a result, the PLA’s military aviation will first receive a small number of vehicles lagging behind its competitors in small quantities, and further large-scale construction of their copies will be at least not very useful. When promoting such a variant of supply to Russian officials, it is worthwhile to stress the tangible decline in the cost of finished aircraft. During the spring discussion of a possible contract with China, the cost of one Su-35 was fully mentioned in full configuration at the level of 80-85 million US dollars. Most likely, a reasonable re-equipment can significantly reduce this amount and make a simplified aircraft more profitable for foreign customers. In addition, such a fighter may be of interest to third world countries that do not have money for high-grade 4 ++ generation aircraft, but there is a great desire to upgrade their fleet of air forces to the current state.

Russian officials also have a third way of negotiating, which, however, does not necessarily lead to the desired result. The contract for the supply of 24 or 50 Su-35 fighters may be a separate item, providing for heavy fines for copying the aircraft without permission. With a good set of circumstances, such a condition of the contract will be able to stop potential “pirates” At the same time, China can not be caught in the burning desire to respect the copyrights of others and other similar things of a paper nature. As we saw several years ago in the case of J-11, it is easier for Beijing not to play "fair game", but to find good lawyers who can prove the innocence of Russian aircraft designers to the "Chinese" design. Therefore, at present, according to official Chinese data, the Shenyang J-11B fighter is being built, which allegedly has characteristics no worse than the Russian Su-35.

Comparison with this particular Russian aircraft, as well as the incomprehensible state of the J-11B project, leads to certain thoughts. It seems that Shenyang has already designed a slightly improved glider based on the Russian Su-27SK, but still cannot fill it with modern equipment. For this, it seems, China is so aggressively asking to sell at least four Su-35 to it. If this is true and the Su-35 is planned to be made one of the prototypes of the new J-11B, then the mass production of the next Chinese "own-developed" fighter can begin within a couple of years after the transfer of the first Russian aircraft.

In general, Russian designers, aircraft manufacturers and the military have well-founded reasons to fear the transfer of new combat equipment to China. This country has repeatedly shown their skills in copying someone else's equipment. So, the possible negotiations on the supply of Russian Su-35 fighters can end with a simple and banal result: because of the disagreement of the Chinese side to make any concessions, Russia can completely stop all consultations and refuse to sell. Of course, in this case, our country will not receive a certain amount of money, but at the very least, it will temporarily secure itself against a possible enemy with good aviation technology. Finally, Russia will still have an instrument of influence in the form of contracts for the supply of aircraft engines. China has not yet achieved such success in this area as our country, therefore, continues to remain dependent on Russian components.