November 22, 2012
48
Despite some shortcomings, many armies of the world want to receive the Tula air defense missile system. 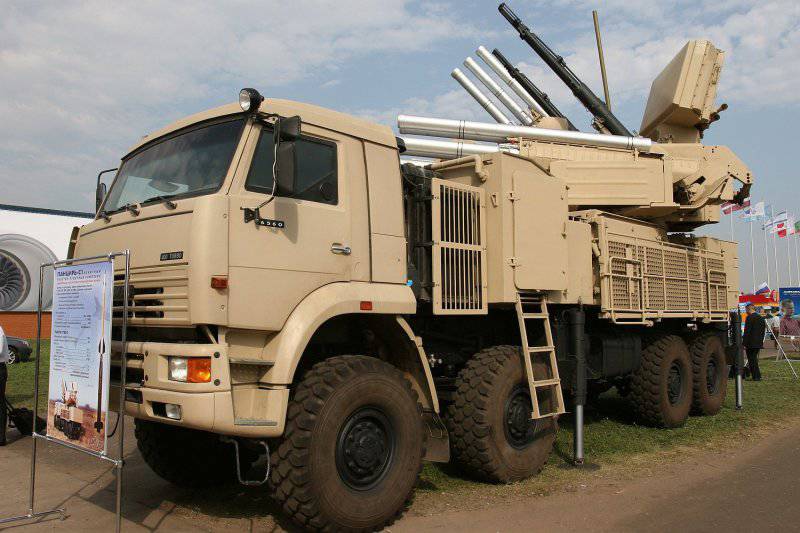 October 2012 of the year was a landmark month for the anti-aircraft missile and cannon complex (ZRPK) 96K6 “Armor-С1” developed by the Tula Instrument Design Bureau (KBP). For the first time, these complexes fired publicly, hitting a real cruise missile launched from a Tu-95 strategic bomber.

Previously, all tests of these air defense systems were carried out exclusively behind closed doors, the results were not made public. In the "breakthrough", although still in question, the Russian-Iraqi package armory contracts included delivery of 42 Pantsir air defense missile systems. At the same time, this is the most criticized Russian air defense system, the refinement of which is still ongoing, despite the fact that it has long been supplied abroad and to the Armed Forces of the Russian Federation.

Started with the program "Roman"

Itself история The creation of the complex is in many ways phenomenal. The Main Directorate of Arms of the Air Defense Forces ordered the KBP to develop the Pantsir-С1 air defense missile system in 1990. Initially, the short-range complex (the “Roman” program) was intended to cover the long-range anti-aircraft missile systems C-300 and the country's air defense radar systems. Subsequently, receiving interspecific status, the complex was also proposed to the Ground Forces to cover the motorized rifle units on the march, to destroy infantry and light armored vehicles. Ordered and ship version. The complex was created on the basis of a proven and very successful anti-aircraft missile and artillery complex 2K22 "Tunguska".

The first version of the complex on the automobile chassis ("Ural-5323.4") with two 30-mm 2А72 cannons and anti-aircraft guided missiles (SAM) 9М335 (defeat range - 12 km, height-8 km) was presented to the inter-departmental commission in 1995 year. Radar 1Л36 "Roman" (development of "Phazotron-NIIR") worked extremely unsatisfactory, the complex could not destroy targets outside 12 kilometers, was unable to fire in active movement. This was followed by a radical reduction in the military budget of the country, and the Russian army was not long for the Roman program.

The situation was saved by a unique contract with the United Arab Emirates, who decided to buy in fact the “Münchhausen” complex, which was still to be created. With the total value of the 2000 contract of million dollars signed in May 734 (50% was paid by the Ministry of Finance of the Russian Federation to repay the state debt of Russia to the United Arab Emirates) for 50 complexes an advance on research and development work amounted to 100 million dollars. Thus, the development of the complex, called “Pantsir-С1”, was carried out at the expense of the customer - an unprecedented case for the Russian defense industry.

The upgraded system received new anti-aircraft guns 2А38М, anti-aircraft guided missiles (missiles) 57-6-E (controlled flight range - up to 20 km). Due to the failures of Phazotron, the timeframe for creating a new multi-functional radar for fire control of the KBP had to create a station on its own with the assistance of OAO Ratep. As a result, the time of supply constantly shifted with the permission of the incredibly patient Emirati side.

According to the agreement, the development work was to be completed by 2003 year, and by the end of 2005 all 50 complexes (24 - on a wheeled chassis, 26 - on caterpillar) were planned to be transferred in three batches (12, 24 and 14). But only in 2007, the UAE received the first cars, the implementation of the contract was delayed to this day. According to official figures, it should be completed before the end of this year. All ZRPKs are mounted on a wheeled platform of a German MAN truck. Plus, 1,5 has been supplied to thousands of 9М311 missiles.

In 2006, Russia and Syria signed a contract to buy 36 anti-aircraft missile-cannon systems Pantsir-S1 and 850 9М311 missiles worth about 730 million dollars. Deliveries were made from 2008 to 2011 year. In 2006, Algeria entered into a contract (price - 500 million dollars) with Rosoboronexport for the purchase of 38 combat vehicles of the modified Pantsir-S1 ZRPK on the KAMAZ-6560 and 900 9XXUMUM missiles. The first deliveries of combat vehicles to Algeria were apparently made at the beginning of 311. The Western press claims that at least two “Pantsirka” are in service with the air defense forces of Slovenia. In addition, according to Western data, Syria re-exported to Iran 2012 complexes "Armor-C10". Damascus and Tehran refute this information with enviable persistence. 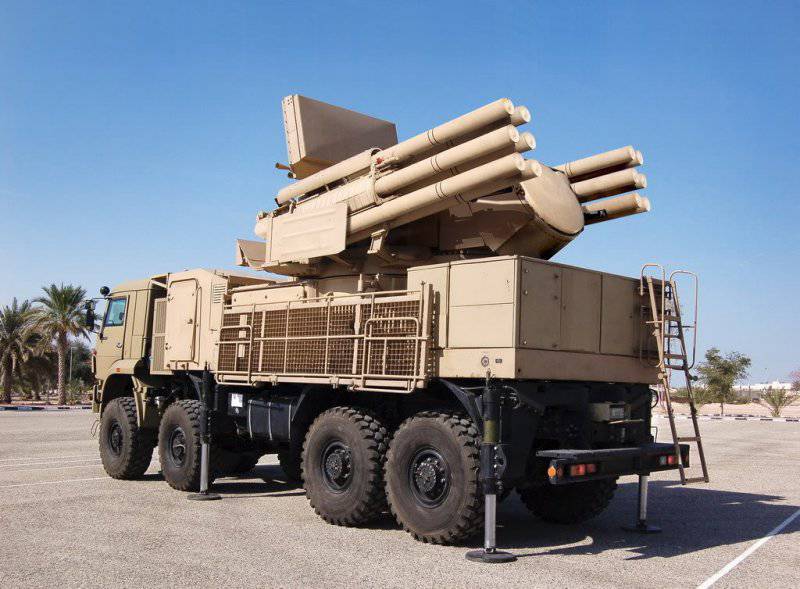 Morocco, Jordan, and Oman have announced a possible purchase of the Shell-C1 air defense missile system. In February 2008, during a visit to Saudi Arabia’s Foreign Minister, Saud al-Faisal, a large (about $ 400 billion) package of possible Riyadh military orders was discussed. Along with the S-2500 Triumph and Antei-300 long-range anti-aircraft missile systems (air defense systems) (export deeply modernized version of the S-3V air defense systems), BMP-XNUMX infantry fighting vehicles, tanks T-90S, military helicopters Mi-17, Mi-35 and Mi-26 were also considered the purchase of complexes "Shell-C1." Triumph, Antei-2500, and Pantsir would together provide the Saudis with a guaranteed unified system of integrated non-strategic missile and air defense. As the author was told by a representative of the Russian military-industrial complex, who is well acquainted with the situation, although a large Saudi package of defense contracts no longer exists for a number of objective reasons, negotiations on its individual segments are still ongoing, including on the Shells, and nevertheless, there is some hope that they will end with a positive result.

The Iraqi leadership, after signing the preliminary agreement, unexpectedly decided to reconsider the terms of the deal, motivating it with the need to avoid possible corruption moments during its implementation. The background of the precedent is certainly political. The Shiite government of the country, trying to conduct an independent policy, including in the field of military-technical cooperation (MTC), is nevertheless forced to correlate all its decisions with the US opinion, which persistently push Ukraine into the Iraqi arms market as a priority MTC partner from countries of the former Soviet Union. However, firstly, Ukraine does not produce such high-tech air defense systems. Secondly, the confidence of world arms importers in the Ukrainian defense industry has been completely undermined by the failure to meet the contract signed in 2009 for supplying 420 to BTR-4 armored personnel carriers in Iraq for a total of 457,5 million dollars, funded by the USA. Deliveries began in March of 2011, but so far the Iraqi side has received only 88 machines from Ukrainians.

The main feature of the Pantsir-C1 anti-aircraft missile system is the combination of a wide-channel system for capturing and tracking targets with mounted weapons. The area of ​​interception of targets at a height of five meters - 15 kilometers, distance 200 meters - 20 kilometers. The complex is created according to the modular principle and can be installed on wheeled and tracked chassis, on stationary platforms. On a digital network, a battery of six complexes can operate in automatic mode.

The combat module of one ZRPK (30 tons) consists of two blocks with six 57-6-E anti-aircraft missiles and two twin-barreled X-guns 2-X38-M. Phased radar detection stations, a radar target tracking system and missiles and an optical-electronic fire control channel were installed. The complex is capable of “capturing” four air objects simultaneously - cruise missiles, combat helicopters, unmanned aerial vehicles. But in fact, the main objective of the Pantyreys is the US Navy's Tomahawk Block 4 American cruise missiles. Upgraded Tomahawk Block 4 taken into service in the 2004 year and have the ability to reprogramming while driving to a goal, which makes it extremely difficult to detect. Developed a new Tomahawk - Cruise Missile XR weighing tons 2,2 (warhead weighs a ton) and a range of two thousand kilometers. The design uses technology "stealth".

In the minute interval, "Shell" can "capture" up to ten goals. The team of the complex is a commander and two operators. Deployment time is five minutes. The response time to the threat is five seconds. Ammunition - 12 anti-aircraft guided missiles and 1,4 thousands of gun ammunition (firing rate - five thousand rounds per minute). Detection range - 36 kilometers. Guidance missiles radio command. The estimated cost of the Pantsir-С1 complex is 13 – 15 million dollars (the last figure for export samples).

At the service of the Fatherland

The Armed Forces of Russia have received so far only 10 complexes "Shell-C1." All of them are distributed among anti-aircraft missile brigades of aerospace defense (EKO) to cover strategic air defense systems (S-400). Now the Russian army has four S-400 regiments, of which two are deployed in the suburbs, one on the Baltic navy and one in the Far East (Nakhodka). The fifth regimental set should be handed over to the Armed Forces by the end of 2012 and deployed in the Southern Military District.

In a stripped-down form (and probably already permanently staffed), the C-400 anti-aircraft missile regiment is now a two-divisional, strictly speaking, consists of two C-400 complexes. To protect one battalion in the nearest approaches, a short-range air defense complex - “Pantsir-С1” is necessary. Thus, while the needs of the army in this complex are temporarily satisfied. Five regiments - ten complexes. However, the deployment of C-400 regiments will continue, they are the basis of the country's air defense missile defense umbrella. And on the way the latest C-500 complexes. The leadership of the PCU states that the Air Force of the Russian Federation ordered the Pantyreus 100.

This year, according to the former First Deputy Minister of Defense Alexander Sukhorukov, 28 ZRPK Pantsir-S1 should have been sent to the troops. Officially, these shipments have not been confirmed. According to the representative of the Russian military-industrial complex, the Pantsir, according to military estimates, in its current state does not meet the requirements stated in the tactical and technical requirements. However, it is a strong and symbolic system capable of progressive development. It is necessary to work closely with her. Moreover, her potential is huge. And this is well felt by prospective customers.

In the summer of 2011, the head of the design department of the KBP, Alexander Zhukov, said that in the near future, the Navy will receive a new anti-aircraft missile and artillery complex under the conventional name "Pantsir-M" (maritime). “Pantsir-M” should replace the “Dirk” complexes. But, according to him, the fleet will receive this complex no sooner than in three years.

The opinions of the military are generally reflected in the report “Assessment of the general characteristics of the Pantsir-C1 anti-aircraft missile-cannon complex” (its theses confirmed to the author at least three officers one way or another connected with the Pantsir-C1 test program).

In the mid-flight stage of the bicalyber rocket of the complex there is no engine, which leads to an increase in its pointing errors at an actively maneuvering target with a course parameter of more than three kilometers. In general, tests have shown that the Pantsir-С1 is unable to hit targets flying at speeds of more than 400 meters per second, although the speed is given in the tactical and technical characteristics of the complex, equal to 1000 meters per second.

The defeat of the target is guaranteed only by direct movement of the air object on the "Armor" as when aiming an anti-aircraft guided missile using the "three-point" method, and at half-flattening. Thus, the goal can only be hit "in ideal conditions." Any actions of the enemy - jamming, maneuvering during the attack, the use of low-flying targets and UAVs will remain unanswered. In addition, the target detection range will be seriously reduced by the influence of meteorological conditions - rain and fog.