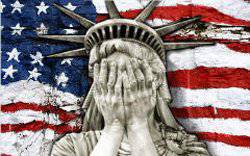 Millions of Americans from all 50 states demand that their state leave the US after 6 in November. In Texas, requiring the separation of its richest and most prosperous state, there are already more than 100 thousands of people. But even in 2009, the famous actor Chuck Norris proclaimed himself the main candidate for the post of independent president of the new country - Texas. Moreover, he used my arguments. America’s moral decay, the decline in production, disbelief in Obama, the theft of Washington bureaucrats — a complete set ... Such a crisis dynamics of political events in the United States after the victory of Barack Obama in the presidential election leads to the conclusion of the most acute domestic political crisis after the Civil War g.).

Such uncontrolled events can lead to chaos in the United States. The model of Colonial Liberalism that dominated the last centuries is close to collapse. It is about the possibility of creating a position familiar to us from the rapid disintegration of the Russian empire after the conspiracy of British intelligence and the overthrow of the king in February 1917. Events then developed with incredible speed, and the authorities simply did not have time to react. The belated response of the US authorities to flooding in New York, etc. indicate that the American system of management and decision-making cannot act effectively in crisis situations. Even the fact that the United States received humanitarian aid from Russia after Hurricane Sandy (two Il-76 military transport planes from Russia brought 50 tons of humanitarian aid to New York), suggests that the United States is indeed the hardest financial and economic moral and environmental situation.

The book of American management specialists Jackson Grayson Jr. and Carl O'Della, “American Management on the Eve of 21 Century,” published in 1991, states that the United States is the largest debtor in the world. “In 1986, the amount of foreign debt reached 264 billion dollars. The rapid transformation from the world's largest creditor to the world's largest debtor, which occurred in just five years, is staggering and has no precedent in stories". For every American (including babies), according to American managers, in 1990, there was a debt of 35 thousand dollars. According to their forecast, the external debt by 1995 should have reached 700-900 billions of dollars. Let me remind you that now the US foreign debt is more than 16 trillions of dollars.

I created the map of the potential disintegration of the USA into six parts back in August of 1998. When creating it, economic and ethnic differences between the US states were taken into account. An important factor that I considered was the history of America. After all, Alaska for a long time was part of the Russian Empire, and Texas, for example, was an independent state. After all, California became part of the United States very late, in the middle of the 19 century. Atlantic America is very different from Pacific America, and financial capital dominates there. Computer technology dominates Pacific America. But few people know that 80% of laptops are made in China. Very large economic relationships between Atlantic America and China.

9 September 1998, when the United States was at the peak of its power and nothing foreshadowed such a systemic crisis as it is today, I really said for the first time about the possibility of the United States falling into six parts. There were no negative indicators then. In November, 2012, the crisis.

As part of the e-democracy program launched in 2011, We The People, the White House has pledged to respond to any public initiatives that collect 25 thousands of signatures in thirty days. A petition in favor of the independence of Louisiana was posted on the White House website the day after the presidential election, 7 in November, and the petition to disconnect Texas from 9 in November. Then the situation began to develop rapidly, and on November 16, a petition was received by all of the US 50 states.

Petition of American citizens to the US president:

2. Claims - the dismissive attitude of the government to economic issues, blatant violation of the rights of US citizens.

Petitions of citizens of the USA say that the USA passed, as a matter of fact, to the second phase of preparation for disintegration. Some world and Russian media either impose information that some US citizens are simply not happy with the elections, or they only lead everyone to economic problems.

The million people who signed the petition are a serious call for US authorities. Barack Obama will be forced to react, in accordance with current US law, because in SEVEN states, the threshold in 25 of thousands of people has been exceeded, which is necessary in order to officially respond to these requirements. While it is clear that the current administration is at a loss and does not know how to respond to these legal requirements.

The belated response of the US government to Sandy, an increase in the number of state petitions (all 50 states), etc. testify to the inefficiency of the American system of governance and decision-making. Recall that the US military bases are in 130 countries of the world. And, most likely, their control system may be lost as a result of the deployment of uncontrolled events in the United States. It is extremely difficult to predict the emergence of new centers of power, the balance of their interests in the event of such a scenario. Apparently, a fierce situational struggle for the "American inheritance" will unfold. It will be accompanied by a series of uncontrolled conflicts throughout the entire planet. It should be emphasized that this scenario is the most incredible and unrealizable. The percentage of its implementation is extremely small.

USA: SCENARIO OF DISASTER №2 - Disintegration of the USA according to the model of Yugoslavia (the worst scenario).

The probability of such a scenario is there. It is due to the presence of a huge arsenal of weapons for the US population, which, if disintegration processes begin, will become the source of the development of uncontrolled processes. In addition, there are quite large contradictions between the US states, which will sharply worsen in the event of a financial and economic collapse that surpasses the Great Depression. In addition, after the start of the crisis, the sale of firearms weapons US population grew by 40%.

USA: THE SCENARIO OF DISSOLUTION No.3 - Disintegration of the USA according to the Czechoslovak model.

The best option for the development of disintegration processes in the United States. The variant can be developed within the framework of the existing American legislation. President of the Transition Obama (for one year) will deal with the rapid separation of powers between the federal center (Washington) and the states. It is important to carry out this process within the legal framework, under the supervision of the UN.

USA: DECISION SCENARIO №4 Partial Chaos (Disintegration of the United States on the model of the CIS).

Partial chaos - a model from the USSR to the CIS. An intermediate model that can be implemented in the framework of the creation of the Three Confederations - Republican, Democratic and Independent. The Association of Republican Governors is already quite active. A Republican Confederation may be created on its basis. The advantage of this scheme of the confederative structure is that the principles of an open society (J. Soros) and a decentralized efficient economic system (M. Albright) can be fully realized. Each of the US states will be free to enter one of the three confederations of the United North American Commonwealth of Confederations. This scheme was partially applied by the British Empire in the division of its main colony - India.