November 21, 2012
4
When developing the Tu-28A, the possibility of equipping this vehicle with a system for refueling in the air was considered. Bench tests of VD-19 engines were completed in the 1963 year, and by the 1964 year they completed flight tests in a flying laboratory. In OKB Tupolev A.N. Two engines were sent to be installed on the prototype Tu-128A - the Tu-128LLU flying laboratory, equipped with VD-19 engines. Flying Tu-128LL with new engines began in 1965 year. During the tests, it turned out that installing new engines can increase the maximum speed of just 110-120 kilometers per hour, 2000 km / h could not be reached, and according to preliminary calculations and according to the task, the maximum speed should be 2100-2400 km / h. It was clear that the problem in the forehead can not be solved, it is necessary to change the aerodynamics of the aircraft. This was done in the project "138" (Tu-138), and the project "128A" gradually turned and by 1968, completely stopped. 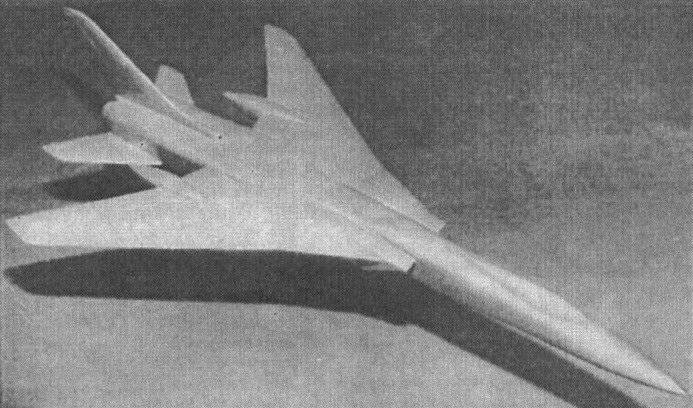 Work on the project complex and the 138 aircraft in the OKB began in 1962, and was a logical continuation of the work on the 128 project. During the selection of the aircraft scheme, three directions were considered: minimal changes to the original layout of the Tu-128; preservation of the fuselage layout using the new wing; completely new layout. The most thoroughly worked the second way. In the Tu-138 carrier plane, the overall layout of the Tu-128 was maintained, the propulsion unit was based on the VD-19 engine, improved aerodynamics was achieved with a new aerodynamically clean wing with a smaller relative thickness, having a new shape in plan. On the 138 aircraft, the main landing gear and wheels, in contrast to the Tu-128, were partially removed in the fuselage and in the root of the wing.

The carrier aircraft should have been used for the two complexes Tu-138-60 and Tu-138-100. In the Tu-138-60 complex, a K-60 type missile and a Smerch-A radar were installed on the vehicle, and a T-138-100 missile - a K-100 missile and the Thunder-100 radar. The possibility of using K-80 (Р-4) missiles for the Tu-28-80 complex (Tu-128С-4) was also envisaged. New radar stations, modernization of the aircraft carrier and the rocket greatly expanded the capabilities of the complex to intercept targets moving at high speeds. For example, the loitering time increased, the maximum speed with rockets increased by 800 km / h, the takeoff and landing characteristics improved, the radar target detection and capture range increased, and the missile range increased.

When designing the aircraft "138" on the models conducted aerodynamic studies showed that the cruise subsonic mode to obtain the required aerodynamic quality can not be obtained due to a significant increase in the midsection of the fuselage (new radar and engines WD-19 had a larger diameter) the required duration and range of flight, which was the most important requirement for the interceptor. The take-off and landing characteristics with the new thin wing also turned out to be non-shiny. To solve the problems offered various ways to refine the project. It was supposed to introduce a system of refueling in the air "Cone", a system for blowing the boundary layer off the wing socks and flaps, or to improve the wing aerodynamic characteristics due to the suction of the boundary layer. But all these measures led either to a heavier design, or to a large extent reduce the efficiency of the power plant due to the selection of air for the blowing system. By the middle of the 1960-ies, the design office decided to carry out further work on the modernization of long-range interception complexes created on the basis of aircraft with variable swept wing. That is what was implemented in the project "148". All work on the 138 project was terminated with the beginning of these works.

In addition to several projects of the 138 aircraft, which were carried out according to the schemes, which basically repeated the original Tu-128, in 1963, the design bureau for the 138 aircraft worked on options for schemes that were based on unconventional layout schemes. For example, a “duck” and tailless schemes with a delta wing were proposed. For aircraft "138", except for engines of the type VD-19, considered the possibility of using the engine RD-36-41, which was a further development of the VD-19.