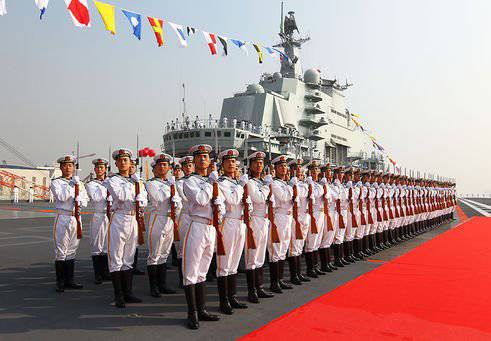 China is ready to build more aircraft carriers. This was announced today by the head of the Chinese State Shipbuilding Corporation Hu Wenming. It was at her shipyard that the Varyag heavy aircraft-carrying cruiser, which was commissioned by the Chinese Navy under the name Liaoning, was purchased from Ukraine.

"China is the only one of the five permanent members of the UN Security Council that does not have an aircraft carrier entirely created by its own forces," Hu Wenming told reporters. According to him, the company he leads is ready to build more “air bases at sea”.

China State Shipbuilding Corporation is the second in the world after the South Korean Hyundai Heavy Industries. This corporation has developed and manufactured most of the air navigation systems installed on Liaoning, which was adopted by the PLA Navy 25 this September.

"We need to increase our own development and manufacturing facilities for the production weapons and equipment to make up for their shortage in the country, and build their own aircraft carriers, "said the president of the corporation.

Hu Wenmin declined to say when and how much Chinese aircraft carriers will be built, citing the fact that such plans are "the prerogative of the central authorities." At the same time, he clarified that China will create aircraft carriers using ejection technology. Aircraft from aircraft carriers such as "Varyag" take off from the flight deck with a springboard.

China, according to experts, does not plan to equip its aircraft carrier with Russian deck fighters. “We didn’t have any inquiries from the Chinese side,” the head of the air force department, Sergei Kornev, told journalists at the Zhuhai air show.