Bahrain: the shadow of the "third force" 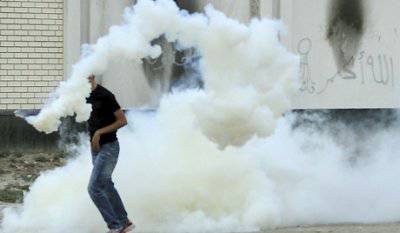 On November 1, the General Secretary of the Bahrain Progressive Democratic Party, Abdel Nabi Salman, in an interview with Golos Rossii, said that the government had banned the opposition from holding any protests. But the unrest in Bahrain is not provoked by the opposition, but by a “third force”. Itself suggests a parallel with Russia and the "marches of millions" supervised by one inconspicuous Mr. from the American embassy. In fact, everything is not as it might seem at first glance.

In Bahrain, freedom of speech and democracy have decided to break up irrevocably.

This was announced on 30 in October by the Minister of the Interior of Bahrain himself - Sheikh Rashid Al-Khalifa. is he сообщилthat the state had previously "tried to ensure freedom of speech by allowing meetings and assemblies, but their participants regularly abused our trust." If it were not for conflicts and offenses, then, probably, freedom of speech in its easy form in Bahrain would have taken root.

But the General Secretary of the Progressive Democratic Party, Abdel Nabi Salman, said:

“All the speeches and demonstrations of the opposition over the past two years have been completely peaceful and calm. Not in the interests of the opposition to organize riots. But, as in all countries of the world, there are some unofficial forces in Bahrain whose task is to provoke unrest. The government of Bahrain should fight precisely with this “third force”, which acts contrary to the interests of our state. In this situation, it would be better for the government and the opposition to cooperate. However, the government accepts neither our proposals nor the proposals of the Center for Human Rights. And these proposals could stabilize the situation in the country. Over the years, a plan for a political settlement of the situation has not yet been worked out. Law enforcement actions are reduced to violent methods. I am sure that the situation in the country will only get worse from this. You can’t endlessly act contrary to the current Constitution and the laws of the country. ”

The situation is, therefore, difficult and strange. On the one hand, there is a wish for freedom of speech and will, and on the other hand, a kind of “third force” presses. There would be uniting for the government and the opposition, but for some reason the government does not want to unite.

Consolidate, in addition to the government to the preservation of autocracy, in Bahrain and confess. After all, the opposition in Bahrain belongs to Shiite Muslims. They constitute the majority of the population of the country. But the ruling dynasty here refers to the Sunnis. The picture is the reverse of the Syrian.

In November, the escalation of opposition between the opposition and the government began. The “third force” from the political debate has temporarily disappeared, and the showdown began between force number one and force number two.

November 7 government of Bahrain ordered deprive citizenship of a group of people who were accused of anti-state activities. Thirty-one people were put on the “black list”: lawyers, opposition activists, religious figures. All of their authorities are accused of provoking riots. Deprivation of citizenship is provided for in Article 10 of the Citizenship Act.

Oppositionists from the Shiite Vefak party have declared that deprivation of citizenship is a deliberate aggravation of the conflict, to which the authorities of the kingdom are going. But what will power achieve? After all, from such measures the power of protests will only increase.

We have already said that the leadership of Bahrain banned mass marches from 30 October and restricted freedom of speech. Therefore, the decision on deprivation of citizenship should be recognized as a logical continuation of the first step in "tightening the screws."

At present, the Shiite majority demands the granting of civil rights and the formation of a government that would be accountable to parliament, and not to the monarch. The authorities flatly refused to carry out such reforms: they would in fact mean the elimination of autocracy (by the way, the dynasty has been ruled there for two centuries already).

As a result, the protests really began to spread. There were also explosions. No, members of the opposition were not blamed for the explosions. Authorities believe that the attacks are the work of Hezbollah.

On November 8, the government of Bahrain accused the organization of carrying out the terrorist attacks in Manama, which killed two people.

The head of the Ministry of Public Security of Bahrain, Major General Tariq al-Hassan сообщил the arrest of 4 suspects and the discovery of hunting for other participants in the terrorist plot. The 5 explosive devices found are supposedly characterized by Hezbollah’s hallmarks.

“The terrorist experience of those arrested shows that they were trained outside the kingdom. The Hezbollah brand names are crystal clear in this case. ”

However, Hezbollah, whose members have the habit of “taking responsibility” in appropriate cases, angrily rejected the Bahraini accusations:

“We reject even a hint of a charge against us. We believe that the Bahraini intelligence exploded the bombs in order to attack the peaceful protest movement, which put forth righteous demands. ”

In short, Hezbollah refused to play the role of a “third force”, imposed by the authorities of the kingdom as if in response to opposition statements.

Today, the Bahraini authorities have finally abandoned democracy and all kinds of freedoms there, and sound grenades and batons changed on shotguns and other gunshot weapon.

In November, the opposition, hiding behind masks, staged pogroms in the cities of the country. They burned tires, smashed lampposts, set fire to palm trees and debris, blocked the roads. And in Sitra in Central Province, rebellious youths threw the police station into the Molotov cocktails.

Against this background, some oppositionists dared to accuse the government of committing terrorist acts in Manama. They talked about the fact that there were "certain forces that were trying to justify the suppression of protests in this way." Thus, the "third force" finally merged with the first. Verbal palliatives were used more for fear of expressing themselves, rather than from the opposition’s real faith in the mysterious “third” participants in the incidents in Bahrain.

But what about the planetary guardian of democracy - the USA? After all, it would seem that it's time to organize some kind of humanitarian intervention in the kingdom, and at the same time arrange non-flight and buffer zones there. There are, of course, Saudi troops and five hundred gallant Saudi policemen, but for some reason they are fighting not for democracy, but just against.

That's the famous columnist Mark Adomanis of this does not understand:

“... The difference in America’s attitude to Bahrain and Syria is as blatant an example of double standards as you can imagine. This is a classic example of inconsistent and hypocritical logic, when a completely different approach to two absolutely identical crises.

This is such an amazing demonstration of American duplicity that I still find it hard to believe. It would seem that the State Department, on the basis of its own selfish interests and self-seeking views, should somehow, albeit sluggishly and formally, condemn Bahrain for its behavior in order to have at least a fraction of intellectual integrity in reserve. But it seems that when the State Department press secretary starts giving a briefing on Syria next time, he will be driven off the stage with his laugh and mockery. ”

No, Victoria Nuland will not be chased away: the boss, Hillary, will stand up for her. The primary geopolitical task of the United States is to preserve influence in the region. Democracy is scarce in Qatar, Saudi Arabia, and Bahrain. But the governments of all these states are loyal vassals of the United States. In addition, petrodollar - their common cause, rooted in the seventies of the last century. The main American value is hegemony. And if Comrade Adomanis is surprised at the “difference in attitude”, then he knows that Syria is not an ally of the United States, but Bahrain is an ally.

“Of course, Bahrain is a close ally of America, hosting the Fifth Fleet of the United States, which is the main component of American military power in the Persian Gulf, one of the strongest military formations in the world, and the main participant in any potential armed conflict with Iran. The United States has long ago been staring at the evil and unaccountable Bahraini monarchy of the ruling minority, because it suits them and meets American security interests. ”

That's all. By introducing "democracy" the United States is destroying those countries whose governments are not loyal and not useful to Washington. But the very same Washington looks at the inner sins of those kings who welcome, say, American sailors. And the fact that the popularity of a deceitful America in the Middle East is declining, as Adomanis notes, and due to double standards has almost dropped to zero, for the White House - not news.

Had it been news, Hillary and Barak would have thought: wouldn’t we stop helping the Syrian "rebels"? Or not to declare the democratization of Riyadh, Manama or Doha? And do not say to Tel Aviv: we will never go to Iran, it has been decided once and for all? Why should America not turn to Turkish Prime Minister Erdogan and tell him: do not delay any more Russian or Armenian aircraft flying to Syria? And why not call Comrade Putin and say that America joins the Russian-Chinese veto on Syria?

Thus, the opposition of the opposition and the royal power in Bahrain will continue. The voice of the oppressed protesters "world community" will not hear. They can talk about him on the Voice of Russia or Rush Today, but they will keep silent in the Washington Post or the New York Times.