November 20 2012
52
The first photos of Chinese appeared on the Bangladeshi Sun Forum tanks VT-1A obtained by this country. 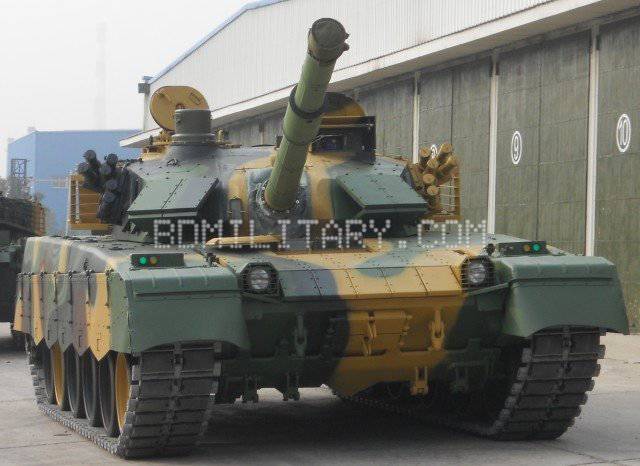 China is gaining momentum in the export of tanks abroad, often displacing serious suppliers such as Russia (T-1С tanks were a competitor to VT-90A in Morocco). The VT-1A tank is not inferior to the best foreign tanks in a number of indicators and surpasses the T-90С in many ways (the presence of the commander’s panoramic sight, modern logistic equipment with the 6TD-2 engine, a modular reservation scheme).

For the first time tanks with such engines (6TD-1I, this designation was given to the engine for Pakistan) were delivered to Pakistan as part of the T-80UD tank (object 478BE). Tests and operation of tanks confirmed their high reliability and the lack of power reduction during operation in hot areas (tBC ³55 C). This led to further purchases of MTOs with 6TD-2 (engine, transmission and cooling system) for Al-Khalid tanks manufactured in Pakistan (around 300 kits), deliveries began from the beginning of 2001. The deliveries of engines to Pakistan continue.

Operation of the T-XNUMHUD and Al-Khalid tanks showed the world that the 80TD two-stroke engines work reliably in extreme climatic conditions, contrary to the predictions of "scientific" skeptics.

After the successful operation of tanks with 6TD-2 in Pakistan, China became interested in them. Now tanks with engines 6TD-2 are delivered to Morocco (reference * .pdf), Bangladesh and Myanmar.

The conflict between the interests of the Ukrainian and Chinese sides did not allow the contract for the supply of tanks with 6TD-2 (VT-1A) to Peru to be realized. 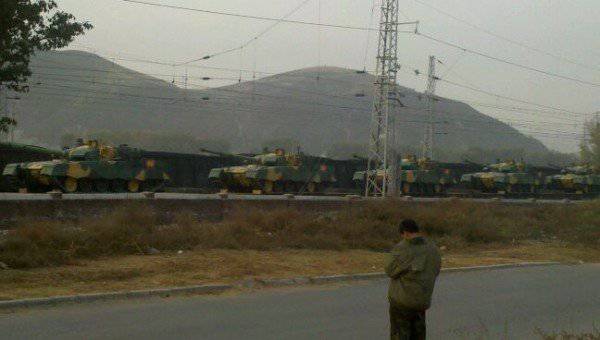 Photo of the echelon with VT-1A tanks for the armed forces of Bangladesh in the PRC.

Serial production of the 6TD-1 engines began in the second half of the 80-ies for T-80UD tanks. During the tests, the 6TD-1 engines worked on the 500 h in different climatic zones without comment, confirming a high level of reliability. 6TD series diesel engines have great potential for development.

If you go back to the questions storiesthe competitor of the 6TD series engines were the 2В series engines developed by ChTZ (X-shaped 2В-12 and 2В-6).

The competition between 6TD and 2В caused serious discussions in 80-s at the level of the leadership of the Soviet tank industry. But judged opponents story. The diesel engine of the 2V series was unsuccessful both when installed on a tank and on light combat vehicles.

It took more than 20 years after discussions of the prospects for engine-building in the USSR. The Soviet Union collapsed. With the 6TD engine, Ukraine turned out to be on the other side of the border; no one interfered with the development of the 2В-12 engine. But where is this engine now? On the T-72 tanks, renamed the T-90, the Kharkov "grandfather" B-2 continues to serve with a number of improvements (B-92СXNNUMX).

This confirms the claim that the creation of a tank engine is a very complicated, time-consuming and expensive process. And it is completely unacceptable if politics interferes with technology (this was mentioned by the creator of 6TD, N.K. Ryazantsev).

Now the outdated B-2 engine (B-92), which was installed on the legendary T-34, is a “brake” on the development of tank building in Russia. No wonder the president of the Russian Federation V.V. Putin studied the characteristics of the 6TD-3 engine at an exhibition in N. Tagil.

In the meantime, there is a situation when the results of the labor of thousands of Soviet people from Kharkov, Moscow, Leningrad, Baku and other cities are destined to be used by China.

Gur Khan: gave Andrei Tarasenko without change from ZhZhechka, for the last sentence simply squeezed a touching tear. Actually Tarasenko is again not original - as they say, “in his repertoire,” therefore one could not continue. But still, without particularly touching Ukraine and their engines, although there are more reasons, I will note some obvious mistakes and falsifications in the cited publication of our most famous forger and a liar.

So, Tarasenko writes that at the REA-2011 exhibition, Vladimir Putin "became interested" in the Ukrainian 6TD-3 engine - this is not true. Firstly, Putin, what is called absolutely “drum” before these glands, and secondly, as a witness, I can say that at the Ukrspetseksport stand, Putin lingered no more than 1-1,5 minutes - he was simply “carried” by. Secondly, the engine as such was not there - there was its layout, which either works or does not work - this is a great mystery, and HKBD does not comment on this question in any way. In any case, this dvigun still does not have Oplot-M on the “supertank”, although it was initially stated that it will be equipped with those.

Tarasenko asks a question about the fate of 2В engines in Russia - the answer is simple - their time has not come yet. For T-72 and T-90 type tanks, there is enough B-92C2, which is cheap, reliable, well developed technologically and structurally, and able to operate and repair. Diesel type 2B-12 are intended for other, more powerful and modern cars - T-95 and Armata.

Now for the “Chinese” - the so-advertised Tarasenko VT-1A - is nothing more than a licensed Soviet “fifty-four” with a bad Kharkov engine. In order for it to survive on the modern battlefield, the Chinese hanged on this tank additional "iron". Naturally, B-2-type diesel dydelek doesn’t draw such a mass (by the way, Oplot overtook a ton for 51, which made the Ukrainians need an engine in 1200.l. — well, I’m yay! Where is the Frost school with it? weight culture?), and then the Chinese turned to the world - "give us anything more powerful." "Dala" only Ukraine - all the rest stupidly "squeezed" their engines. So Andrei has nothing to cry for the Chinese achievement - no one forces the Dviguns themselves - no one forces them, and they also blackmail them, as it happened with Peru (Andrei doesn’t write about this fact, although Peru mentions something). By the way, I ask you to pay attention to the respected community for a significantly increased envelope (in height) of the MTO of a Chinese tank. Doesn't it say anything to you? After all, Ukraine advertises its 6TD as a very compact engine that surpasses everything and everyone in overall power! Why did the Chinese grow up so much? I can assume that they, the Chinese, had to significantly increase the volume of air cleaning and cooling systems - otherwise, 6TD will simply rise there in a few hours. This is about the notorious "55 degrees. Celsius).

Even more ridiculous is the advertisement from the Tarasenko defense of VT-1A, especially its towers. Oh, how our Andrei loves watering the "wrong" Russian DZ Kontakt-5 and how her "wrecking" is installed on T-72 and T-90 Ural designers. All of these "holes" and "weakened zones" are fed up with him. And then on those ... It turns out that the Chinese already have everything according to the “right” one, and the “holes”, which have only become larger, for some reason cause Tarasenko to admire, and not “righteous anger”. Strange kid ...

Well, and most importantly ... Tarasenko lists the countries to which VT-1A is shipped and presents it as a great success in Chinese-Ukrainian hochlach military-technical cooperation. But for some reason does not name the number of machines supplied in these 3 (Three) countries. Add Pakistan with the Ukrainian-Chinese-Pakistani Al-Khalid - four countries will succeed. However, why the Chinese, for their domestic consumption such a good and "promising" 6TD not use? Maybe Andrei will tell us somehow? At the same time, tanks T-90 with engines B-92 and 2 are in service with 6 (Six) countries: India, Algeria, Azerbaijan, Syria, Uganda, Tajikistan. At the same time, we do not forget that the native Russian army successfully uses the T-90 and the upgraded T-72 with B-92C2 engines. Another country - Kazakhstan - purchased BMPT, TOC-1 and BREM-1М all with the same "good for nothing" B-92C2. Togo 8 countries. At the same time, purchases amount to hundreds of units, and the cumulative output has long exceeded one thousand, and will soon exceed the second. Several more contracts are in the final stage of signing, incl. with the countries that were offered both “Oplota” and “VT-1A” - for this reason, until the moment of real supplies, I will keep silent the names of these states. Can the Chinese with Ukrainians boast such a sales volume? If they can, then what is not bragging?

Ctrl Enter
Noticed oshЫbku Highlight text and press. Ctrl + Enter
We are
Details of the modern Iranian tank. "Kharkov trace" in the development of the acclaimed OBT "Carrar"Are the Pakistani T-XNUMHUD tanks having engine problems in the desert?
Military Reviewin Yandex News
Military Reviewin Google News
52 comments
Information
Dear reader, to leave comments on the publication, you must to register.