Ukrainian soldier of the future wears a comfortable suit, helmet and super glasses 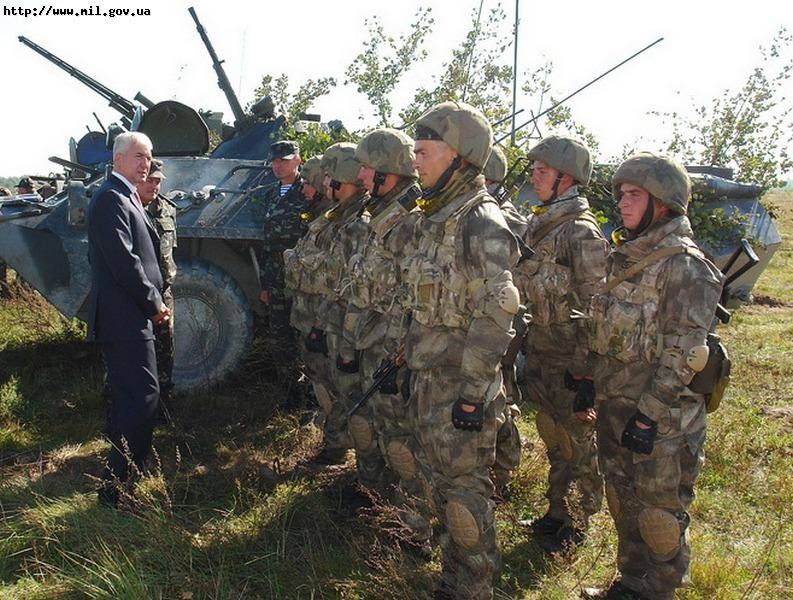 New armor for the future Ukrainian soldier began to be forged in the Armed Forces, attracting domestic and foreign defense enterprises for this. The first samples of experimental combat equipment were demonstrated at the recent military exercises "Perspective-2012".

“Although in many armies, research and practical work on shaping the image of a“ soldier of the future ”has been going on for more than a year, earlier in Ukraine they avoided this urgent task. Only the current leadership of the Ministry of Defense has taken this area under personal control, say representatives of the national defense industry. - And the first results are already there.

Paradoxically - but a fact: at all times the set of weapons and equipment carried by infantry and equipment was almost always at the limit of human capabilities.

Today, at least four dozen countries are implementing national programs to create their own "soldier of the future." Thus, individual combat kits systems are developed in the USA (Land Warrior and Mounted Warrior), in Germany (IdZ), Great Britain (FIST), Spain (COMFUT), Sweden (IMESS), France (FELIN) Russia (Warrior), China, India , South Korea, Japan, Norway, Romania, Poland, the Czech Republic and other countries. Almost everywhere, soldier equipment is a complete solution from 5-10 subsystems, including means of protection, destruction, communications, control, as well as life and power supply, and others. A fighter dressed in combat gear becomes a unit of a single command and control network capable of conducting two-way data exchange with the command.

Ukraine is no longer aloof from world military trends. At the beginning of 2012, Andrei Artyushenko, Director of the Development and Procurement Department of Defense Weapons and Military Equipment, carefully lifted the curtain over our “soldier of the future”:

- The Ministry of Defense together with special exporters pay great attention to this area. Minister Dmitry Salamatin personally supervises this issue. In the Weapons Development Program for the period 2012 - 2017. This section is provided, it is divided into several stages. The project involves an integrated approach with the development of small-scale weapons, night vision devices, communications equipment, body armor, controls, etc.

Already in September, 2012 showed an experimental batch of new uniforms on Perspective. This revolutionary "Gorka" suit MK-2 gained popularity among employees of various special forces. Now it is tested and our military.

Comfortable fit and materials used in the composition, make it ideal for field conditions. High wear resistance of the suit has been achieved thanks to the newest profit-on material (composition: 65% cotton, 35% polyester), which has successfully passed laboratory and field tests, in the production of which an innovative approach to the structure of knitting fibers and fabric reinforcement is used.

The head of the military during the exercise "Perspective-2012" commented on the novelty:

- This clothing is qualitatively different from previous samples. It is very convenient, does not interfere with the movement, the soldiers really like it.

During the exercise, the military were equipped with body armor and helmets of Ukrainian origin, and protective plates were used to protect the knee joints of the legs.

- Equipment - a prototype of weapons, protection and ammunition of a soldier of the future. Over time, the kit will be supplemented with a combat helmet with built-in night vision device, micro-video camera, as well as reliable personal protective equipment - light anti-splinter vest. An ordinary soldier will have a GPS receiver so that the commander can see and orient where the soldier is located, ”added Anatoly Gurnovich, head of the development of weapons and military equipment of the Ground Forces. - There is also a microcomputer with a display, which will receive information from the commander, a portable radio station for targeting, sensors that measure the body temperature of the soldier, pressure, pulse and allow him to monitor his condition.

New models of small arms were also shown on large-scale exercises of the Armed Forces of Ukraine "Perspective-2012". It is still unclear what a nominal small family will be able to replace the Kalashnikov assault rifle. But the Ministry of Defense has already decided to combine work on the creation of individual equipment with a new sniper complex caliber 12,7 mm. Snipers with such weapons will also be equipped with optical-electronic surveillance tools - small reconnaissance devices, means of determining the source data for firing, and other necessary equipment. Sniper groups capable of hitting targets, including lightly armored ones, at a distance of up to 2 km will significantly increase the combat potential of the Ukrainian special operations forces.

The Ministry of Defense has begun the purchase of satellite navigation systems receivers, which are developed and manufactured by one of the domestic state-owned enterprises. For individual use by the fighter, a wearable navigation kit has been created that solves both navigation tasks and performs calculations for firing. The location is determined both by signals from the American GPS satellite system, the Russian GLONASS, and by autonomous navigation tools (magnetic compass and micromechanical sensors). It can show the scheme of the battle, determine and transmit the coordinates of the target, receive and display commands. It weighs such a smart pencil case 600 grams.

Also created a simple, reliable and effective means personal infantry tactical intelligence. The transmitting device is a simple digital video camera that, if necessary, is fired by a soldier over the battlefield from a device that looks like a flare gun. The signal from the video camera in encoded mode is fed to the fighter’s hand-held receiver (any communicator from leading manufacturers of mobile equipment can be used). A video camera is operating under a descending parachute for about one minute.

Modern equipment for the soldier, equipped and prepared for participation in the "high-tech" war-to the highest standard, is not cheap.

“But no one is going to equip our soldiers, from helmets to socks, to everything in the corps.” Something will be bought, something will be created in our enterprises, - they say in the Ministry of Defense. - At the forefront of the approach is "efficiency - cost." The integral result is important for us, which at the first stage will satisfy the requirements of the most combat-ready units and units, and then at the already established base will increase the capabilities of this combat equipment - taking into account new technical solutions and finances. This is the concept of the so-called "open architecture". We can analyze the foreign experience of creating a "soldier of the future" and avoid the mistakes that others have made.

The military department recognizes that only the first steps have been taken to solve the ambitious task of creating a national "soldier of the future". But this is the beginning of the road to a new look of the new army - effective, modern and competitive. Ukraine simply does not need another army.

- We have the technology. It is necessary to use all these developments - navigation tools, digital communication. As soon as we do this, we will qualitatively change the face of our Armed Forces, - Dmitry Salamatin is convinced.