Russia at the Airshow China 2012

November 20, 2012
23
Despite the fact that the Airshow China 2012 airshow has already ended, over the next few days it will remain one of the main topics in discussions about the fate of the world. aviation. Of course, the quantitative and qualitative indicators of the Chinese exhibition still can not be compared with the data of the world's leading salons, but China is doing everything to interest both manufacturers of aircraft and its potential buyers.

And yet, while the Airshow China remains an event, if I may say so, second class. Among other things, this is reflected in the composition of the shown equipment. So, from Russia only one new aircraft was present at the static parking: the SSJ-100 “Superjet” liner in the Yakutia airline coloring book. This passenger plane became the first representative of its type, who happened to participate in the Chinese air show. Previously, other copies of the "Superjet" several times participated in similar events held by other Asian countries, but for the exhibition in China SSJ-100 flew for the first time. Earlier it was reported that the Su-2012C fighter can also be demonstrated at the Airshow China 35. However, later on, due to some problems, the leadership of the Russian delegation decided not to send it to China. Nevertheless, according to M. Pogosyan, Su-35С will appear at the next exhibition in Zhuhai, in 2014 year. 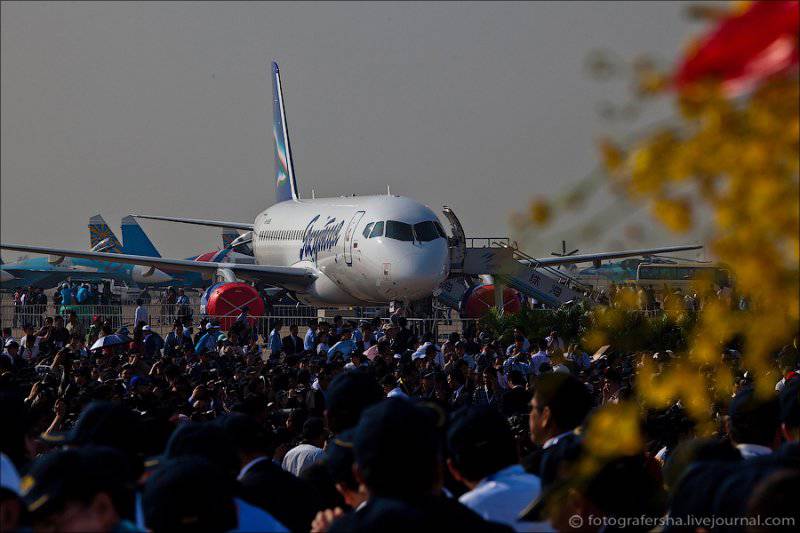 Superjet-100 in the livery of the airline "Yakutia" first landed in the Chinese Zhuhai 10 November to participate in the exhibition China Air Show-2012. Participation in the demonstration flights was not planned, the plane stood on static for a week for free to visit representatives of the airlines and guests of the air show (Marina Lystseva, photographer)

Due to difficulties with the Su-35С, the SSJ-100 turned out to be the only full-scale aircraft in the Russian exposition. The rest of the equipment was represented exclusively by mock-ups and promotional materials. Among them were models of both military (Su-35C, Su-34, etc.), as well as civilian or multi-purpose vehicles (MS-21 and Be-200). Helicopters were not forgotten: combat Ka-52 and Mi-35, as well as multi-purpose Mi-26T, Ka-226 and Mi-171 in various modifications.

Of the considerable number of Russian-made aircraft presented, the Yak-130 training center attracted the most attention of the cabin visitors. In the first days of the exhibition there were reports of plans for Bangladesh. It is reported that this Asian country has indicated its intention to buy a dozen training Yak-130 and as many Su-27 fighters of later modifications. The acquisition of the aircraft will be made with the help of a Russian loan. The issue of his issuance, it is alleged, has almost been resolved. In addition to Bangladesh, new training aircraft can go to serve in Malaysia and Vietnam. These countries have repeatedly bought Russian-made aircraft and may well continue this “tradition”. All in all, according to Russian analysts, the air forces of the world can acquire up to 250 Yak-130 aircraft. At the same time, there will be no China among the purchasing countries. The military of this country have already clearly expressed themselves about this: they will make their own training aircraft, they don’t need the Russian Yak-130. 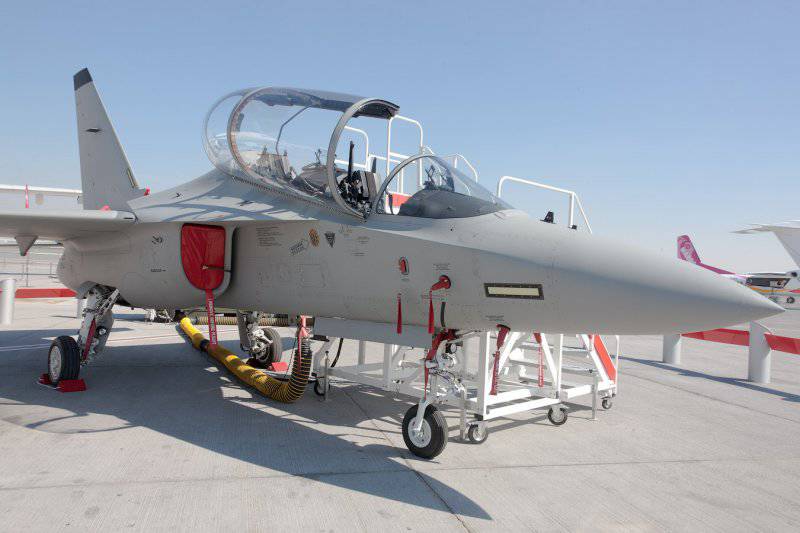 A kind of compensation for the refusal to buy training aircraft can be an agreement on the supply of the civilian version of the seaplane Be-200. It is alleged that the Chinese Ministry of Forestry has not only expressed its interest in this aircraft, but also initiated supply negotiations. The reason for such interest, most likely, are the timing of creating your own aircraft of similar purpose - Jiaolong-600. The Chinese-made amphibious aircraft will make its first flight in at least a year and a half, and the Be-200 is already being mass-produced. Accordingly, while the production of Jiaolong-600 will be mastered, the Ministry of Forestry will be able to use Russian aircraft that have all the necessary capabilities and only slightly inferior to their own design for the maximum load.

The issue of supplying aircraft to China has one not very pleasant side. The fact is that this country has been repeatedly accused of copying foreign technologies and equipment. Because of this, several contracts for the supply of aircraft were not signed at the time: Beijing wanted to receive small quantities of aircraft, which was very transparent to his plans. It is quite clear that to fully equip the troops you need much more machines than two, three or even ten. However, for careful study and copying enough, even one aircraft. Not wanting to “give” their products to the Chinese, Russia refused to supply several times. November 21 event will be held in Beijing, which should at least slightly improve the situation with such counterfeit aircraft. All the necessary documents for the work of the joint intergovernmental commission have already been prepared. Russian aircraft manufacturers hope that they will finally be able to resolve the issue of unlicensed copying and the production of our equipment. 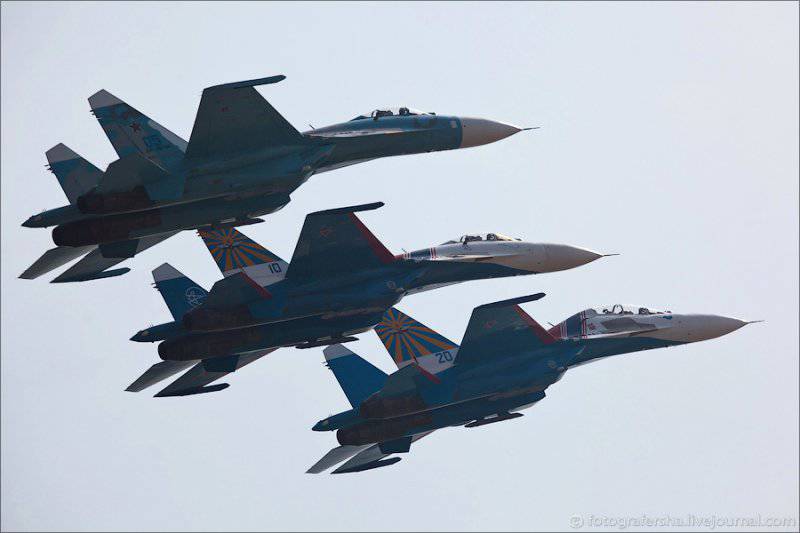 At the Airshow China 2012 air show, the first in a few months overseas performance of the Russian Knights aerobatic team took place. Recall, a relatively long break was caused by organizational issues, because of which the pilots could not speak at the Farnborough 2012 cabin. As if compensating for the failure, the Russian pilots took part in the flight program of the cabin during the four days of its work. However, it was not without problems. On Thursday, not five Su-27 fighters took to the air in a recognizable coloring, as originally planned, but only four. Due to technical problems, one of the aircraft was decided to leave on the ground. It is worth noting the professionalism of the technicians who accompanied the aerobatic team. The very next morning, on Friday, five aircraft again participated in the flight program. The necessary parts were installed in just a few hours. It is noteworthy that both “variants” of the demonstration flights of the group caused a great stir among the audience. As eyewitnesses say, after the announcement of the “Russian Knights” a lot of people came out of the exhibition pavilions to look at their performance.

Airshow China 2012 in the case of Russian aircraft manufacturers fully confirmed its status as a young but promising exhibition. Yes, not a single contract has been signed yet, but in the near future new agreements on the delivery of training aircraft and amphibious aircraft may appear. In addition, some potential buyers might be interested in any aircraft or helicopter and express their intentions to purchase a bit later. Anyway, the salon in Zhuhai is definitely not unsuccessful for Russian aircraft manufacturers.