19 November 1190 was founded by the Teutonic Order

November 19, 2012
21
Eight centuries ago, in 1212, the first major military clash of the Russians with the new enemy of Russia, the Crusader Knights, occurred. United 15-th. The army of Veliky Novgorod and Polotsk, led by the then Prince of Novgorod Mstislav Udalym, struck the support bases of the Order of the Sword-bearers in the Baltic States. The Crusaders actively mastered the lands that were within the sphere of influence of Russia, which alarmed the Polotsk principality and the Novgorod land. True, the Germans soon concluded a separate peace with the Principality of Polotsk, and the Novgorodians, being alone, also agreed to an armistice with the order. 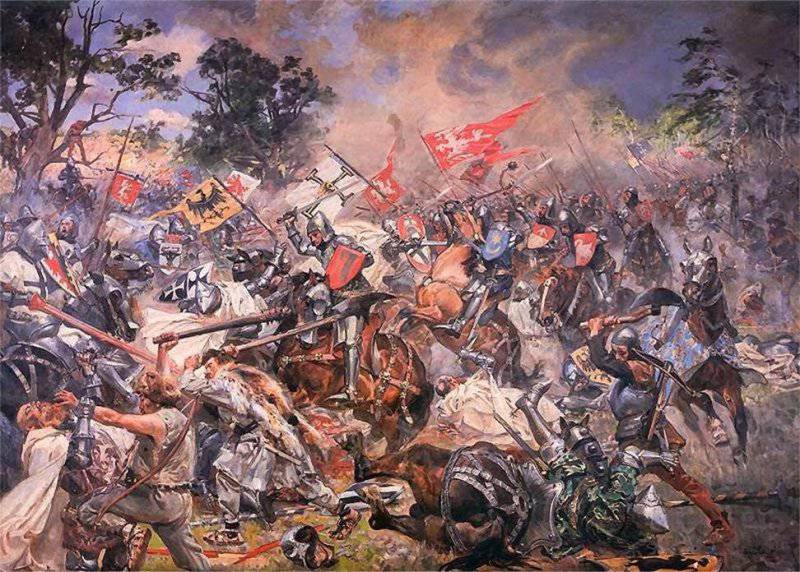 The Teutonic Order, like other knightly orders, was a project of the Roman throne, which in the Middle Ages was engaged in the creation of a common European community. In the XI century, Rome almost completed the subordination of the European nations proper: the Celtic and Slavic cultures were partly destroyed, some were subordinated and subjected to hard assimilation. The Roman throne came to the borders of Western Europe and the question arose of further development, or rather expansion, since the West was founded as a civilization-parasite from the time of the Roman Empire. On the Iberian Peninsula, the West faced strong resistance from the Islamic world, the reconquest process took several centuries, and this territory could not satisfy the needs of the West. The Roman throne needed hundreds of thousands, millions of slaves and a constant influx of various resources. Therefore, the most promising areas were: “the onslaught to the East” - in the lands of the Balts and Eastern Slavs, and the Middle East - the crusades with the aim of “liberating the Holy Sepulcher”.

The continuous war with the Islamic and Balto-Slavic world demanded not only the constant mobilization of the forces of the Western feudal lords, but the permanent armed forces. We needed professional warriors, completely loyal to the Roman throne, ready to give up the pleasures of life, to live in the most severe conditions, fastened by iron organization and discipline. The solution of this problem was the spiritual and knightly orders. During the century, more than a dozen such orders were established, among them such famous ones as the Templars, the Hospitallers, the Benedictines, the Jesuits, the Franciscans, the Teutonic and Avisian Orders, the Orders of the Sword, Calatrava, Satyago and others. The orders submitted only to Rome, having their own lands, they were self-sufficient, actually turning into a kind of state formations. A certain system of organization and education turned them into a formidable fighting machine.

The German Order was founded in 1190, and it was a necessary measure. During the siege of the Middle East fortress of Acre, a very difficult situation arose in the field of medical care for the army of the Crusaders. Diseases mowed down soldiers, hospitals were overloaded, besides Johnites were worried primarily about the British and French. Then some immigrants from Germany, mainly from the cities of Bremen and Lübeck, decided to create their hospital order. To take care of the wounded and sick. This initiative was supported by the representative of the German nobility duke Friedrich Hohenstaufen. The new monastic order was quickly approved. The new fraternity was named the German Order of the Hospital of St. Mary. By 1197, when a new army of crusaders arrived in the Middle East, the order flourished. He now not only cared for the sick, but also supplied food, helped with housing, supplies, those who were poor, or were robbed along the way, lost everything in battle. Bremen provided material support to the order.

In 1196 - 1199 the order was transformed into a spiritual knight, having received military authority. For quite a long time the order could not decide on the main direction of its activities: to concentrate all efforts on the defense of the Holy Land or move to Europe, sending forces for war with the pagans in the Baltic States. Only the loss of Acre in 1291 caused the order to slowly and reluctantly say goodbye to the hope of returning to Jerusalem.

Back in 1211, the Hungarian king Andrash II invited the Teutonic knights to help fight the Polovtsy. The German knights settled on the southeastern border of Transylvania, in Bourzenland, and they gained considerable autonomy. By 1220, the German knights built five castles, and gave them the names that later called the castles in the Baltic States. Marienburg, Schwarzenburg, Rosenau and Kreuzburg were located around Kronstadt twenty miles away from each other. These fortresses became the bridgeheads for capturing the almost uninhabited Polovtsian lands. The expansion was carried out at such a rapid pace that the Hungarian nobility and clergy, who were not so interested in these lands, who were in danger of constant Polovtsian raids, were inflamed with envy and suspicion. The prospects for the Crusaders in this region were broad. Purposeful and well-organized knights could easily walk along the Danube and take the valley to the Black Sea, reopening the land route to Constantinople. The success of the knights, their refusal to share booty with influential people from the Hungarian nobility, ignoring the rights of the local episcopate, irritated the Hungarian ruling elite. In turn, the knights did not have enough diplomatic skills to maintain their positions in these territories. Local nobility demanded that the king remove a handful of rogues who create a kingdom within the kingdom. In 1225, the king demanded that the knights immediately leave his land. Militarily, this weakened the kingdom, since the Polovtsians soon resumed their raids. And during the invasion of the Tatars, part of the Polovtsian hordes migrated to Hungary, undermining its stability for a long time.

This failure seriously undermined the position of the order. Many people gave years of life and all their means to gain a foothold in the new lands. All these efforts went awry. The situation was saved by the penetration into the Baltics. Attempts by the Polish kings and nobles to expand their territories at the expense of the Baltic tribes, to Christianize them, met with stubborn resistance from the pagans. Then they turned for help to the Roman throne and knightly orders. In 1217, Pope Honorius III declared a campaign against the Prussian pagans, who seized the lands of the Polish prince Conrad I of Mazovia. In 1225, the prince asked for help from the German knights, promising them possession of the cities of Kulm and Dobryn, as well as the preservation of lands seized from the pagans. As a result, the Baltic States became the main base of the Teutonic Order.

The first to enter Prussia was a small detachment under the command of Conrad von Landsberg. The Germans built a small castle Vogelzang (with him. "Bird song"). The knights could not resist the onslaught of the Prussians, but by this time the area where they had strengthened was already heavily devastated from the former Polish invasions, and some residents accepted Christianity. In addition, the Prussians did not see in the small detachment a great threat, it was a big mistake. After the knights fortified, they began to cross the Vistula, killing, burning settlements and crops. Von Landsberg agreed to a truce only on the condition of the adoption of Christianity by the pagans. It was a period of reconnaissance in force, when the knights did not have the strength to gain a foothold behind the Vistula. They explored the terrain, learned customs, language, military tactics of their opponents.

In 1230, reinforcements arrived under the supervision of Master Hermann Balck. Pretty soon, an army of crusaders, consisting of Germans, Poles, and local militia, devastated areas of West Prussia. In 1233, about 10 thousand people were forced to convert to Christianity. Another fortress was built near Marienwerder. In the winter of 1233, the Prussians suffered a heavy defeat. The knights won battles if they passed by their rules: the Prussians could not withstand the blow of knightly cavalry, disciplined infantry with their crossbows. The Prussians, on the other hand, waged a skillful forest war, using the knowledge of the terrain, forest and marsh shelters. The Crusaders preferred to attack in the winter, when numerous rivers, rivers, lakes and swamps froze, and it was easier to find the enemy’s shelter, to go out to them. In 1236-1237 there was a big offensive campaign. Each year, a small army of crusaders invaded Prussia and expanded the possessions of the order. Initially, Polish and Pomerelle warriors played a large role in these campaigns, but gradually their significance fell. The Germans strengthened their positions, and they no longer needed the help of former allies. In addition, the Polish Piast feuded with each other, Konrad Mazowiecki had problems at the borders, the Polish nobility could not constantly send forces and resources to the occupation of Prussia. The occupation of Prussia became the task of the Teutonic Order. The knights in their attack used not only direct force, but also the strategy "divide and conquer." The defeated Prussian tribal alliances were used as allies in subsequent wars. Relying, thus, on foreign military resources, the Crusaders won up by considerably superior forces of Prussians. Prussian campaigns were completed in the 1283 year, when the Sudavia region was subordinated.