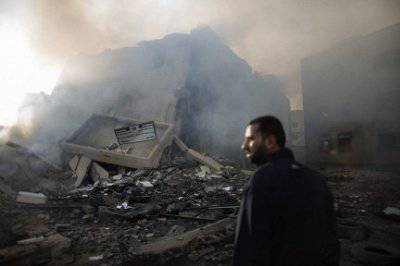 The fire ignited in the Middle East continues to burn. The real war broke out this time not in Syria itself, but not far from it. Israel, under the pretext of combating terrorism, launched aggression against the Gaza Strip.

France, the United Kingdom, and the United States have already placed the responsibility only on the Palestinian side and have declared that Israel has the right to defend itself.

And again we are witnessing double standards: Israel, therefore, has the right to defend itself, and neighboring Syria - no? Syria has already 20 months protects itself from terrorists, and, in a much more humane way for civilians. But the Syrian President is declared an international outcast, and the leadership of Israel is a priori innocent.

Moreover, the Hamas movement, which in the Syrian conflict has sided with the so-called “rebels,” shares the extremist beliefs of the Muslim Brotherhood, which also have a huge influence on the Syrian opposition. According to the logic of the Western countries, it turns out that when these extremists and radical Islamists act against the legitimate government of Syria, they are good and they should be fully supported. When they are in Palestine, it’s permissible for Israel to fight against them, even at the cost of the lives of innocent Palestinians.

The West behaves in this way not for the first time. Even Yugoslav President Slobodan Milosevic, leading the battle with the illegitimate Hague Tribunal, noted that when radical Islamists acted in the Serbian province of Kosovo and Metohija, the West welcomed them in every way, and when the same people fought with the Americans in Afghanistan, they were imprisoned in Guanatanamo. After more than a decade, the same situation is repeated.

Unlike the imperialist states, Syria, like many other Arab countries, as well as Russia, Iran, and China, condemned Israel’s aggressive actions under the pretext of fighting terrorism, which killed innocent people. ATS leadership expressed its condolences to the families of the victims and reaffirmed that the Palestinian people have the right to self-determination.

In this light, the position of the League of Arab States looks particularly unattractive, which, instead of expressing solidarity with its Arab brothers dying under Israeli fire, is occupied with actions against the country that was one of the founding members of the Arab League - Syria.
After a new “opposition” structure was created in Qatar instead of the old, exhausted “Istanbul Council”, the Gulf countries and France were quick to recognize it. Now Turkey has joined this recognition, which recognized this “Qatari coalition”, many of whose members were not in Syria long ago and forgot what it looks like, the only representative of the Syrian people.

Obama is still cautious, at least in public. He said that the United States would not rush to recognize this “Qatari coalition” as the Syrian government. Either this is hypocrisy, or Washington’s right hand doesn’t know what his left hand is doing. After all, this coalition was created at the direct appeal of US Secretary of State Hillary Clinton and tailored for her pattern.

But the leadership of France - a country that was one of the instigators of last year’s barbaric attack on Libya - now intends to increase support for the Syrian militants and turn its weapons from tacit fact into frank. During the time that has passed since the bloody days of the bombing of Libya, the leadership in France has changed, but the colonial essence remains the same. Hollande does not want to learn from the bitter experience of his predecessor Sarkozy and comes to the same rake - so the “left” join up with the “right” as soon as it comes to punishing recalcitrant countries that do not want to obey international dictate.

Russian Foreign Ministry spokesman Alexander Lukashevich condemned the intentions of Western countries, particularly France, to increase support for armed terrorists in Syria, referring to the UN General Assembly’s Declaration on Principles of International Law adopted in 1970, which prohibits some countries to support or finance armed actions aimed at forced change authorities in another country. In addition, the declarations of France strongly contradict the spirit of the Geneva accords and the Kofi Annan plan, recognized by the UN Security Council, whose mission is being continued by Al-Ibrahimi.

But the West has not for the first time been disrupting the reached peace accords, taking part in the crimes of the militants and thus Mara and his hands with blood.
Militants taking advantage of such a high "roof" continue their brutal atrocities. "Opposition" seeks to destroy, above all, the color of the nation - educated people, intellectuals, artists, engineers, specialists. So, on November 12 in the city of Homs an attempt was made on the engineers of Hisuya Khaled Saad al-Din and Yusef Ibrahim Tlas. Terrorists fired at their car. This time the attempt did not reach its goal, but the driver Yusef Mahmoud Tlas was killed.

On November 13, not far from the town of Muhanbal, in the province of Idleb, a number of officials made an inspection trip in order to familiarize themselves with how the bridge, destroyed by terrorists, is being repaired. The gangsters shot the car in which they were driving and, as a result, Abdel-Razak Al-Youssef, director of the branch of the General Directorate of Road Transport, died.

14 November, gangsters staged an explosion in the Mezze quarter, near a shopping center. Only by a miracle there were no casualties, but material damage was caused to nearby buildings.

On the same day, criminals subjected mortar shelling of civilians at home. One projectile was fired near the Umayyad Mosque, three more - in the residential district of Dahiya Al-Asad. A few apartments of civilians are destroyed, and only by luck, there are no victims.

But the blood was shed in Yarmuk camp in Damascus. For the umpteenth time the place of residence of Palestinian refugees came under fire. Six people died.
On the same day, on November 14, in Aleppo, civilians launched a rally of support for the Syrian army to Sheikh Lutfi Square. Such actions in a city whose inhabitants do not accept pseudo-revolutions are not uncommon. Militants are very angry at this position of the inhabitants of the city, and they open fire on such actions, not sparing either women or children. So this time the brave demonstrators were shot at. Three women and four children are injured.

In Homs, in Al-Waar, terrorists detonated a bomb near the exhibition complex. Their victims were two children. Six people, including a woman, were injured.

On the Damascus-Aleppo highway, militants stole humanitarian aid from the Red Crescent, which was intended for civilians of Idleb and Aleppo. Three trucks with 15 tons of food, medicine, and other goods needed by suffering people were hijacked by "fighters for democracy."

15 November in the province Idleb on the road between the cities of Erich and Serakeb criminals staged a deadly explosion. Two civilians were killed, three more were wounded. Three more bombs the bandits wanted to lay in the city of Ham, but, fortunately, these attempts were foiled, which means that several lives were saved.
And this “opposition” is supported by the countries of the West, it is considered “noble rebels” and they are going to provide more weaponsin order to shed more blood, more women and children would die. Does the West really not see their atrocities? Just in the offices of Paris and London, Washington and Ankara there are frozen cynics who, despite the blood and sacrifices, the sufferings and tears of civilians in Syria, continue to go over their heads to their plans, and their hatred for a small country that does not want to submit to their will. , eclipsed for them all human values ​​and legal norms.

Serious representative of Syria to the United Nations, Bashar Al-Jafari, pointed to flagrant violations of Western countries, speaking at a meeting of the UN General Assembly in New York, at which the report of the UN Human Rights Council was discussed. This report was extremely one-sided, it contained charges only against the Syrian army and did not condemn the barbaric crimes of anti-Syrian terrorists in a single letter. But one can only wonder how the poison of the hateful language addressed to Syria does not burn the paper on which this report is written.

Al-Jafari has accused Western countries of privatizing the UN Human Rights Council and using it for purposes for which it was not intended. Instead of the true protection of human rights, there is a unilateral accusation of the Syrian state. “Guardians for the rights of the Syrians” do not want to notice the suffering of the citizens of the SAR from unilateral economic sanctions that exacerbate the economic and humanitarian situation in the country, he said.

The representative of Syria to the UN called on the aforementioned Council to demand that the states that are accomplices to terrorism stop actions directed against the Syrian people, shedding their blood and turning the inhabitants of Syrian cities into refugees. Will this call be heard? Judging by the double standards of the West - no. But nations must have their say and demand that their governments stop using taxpayers' money to finance barbarians and murderers.