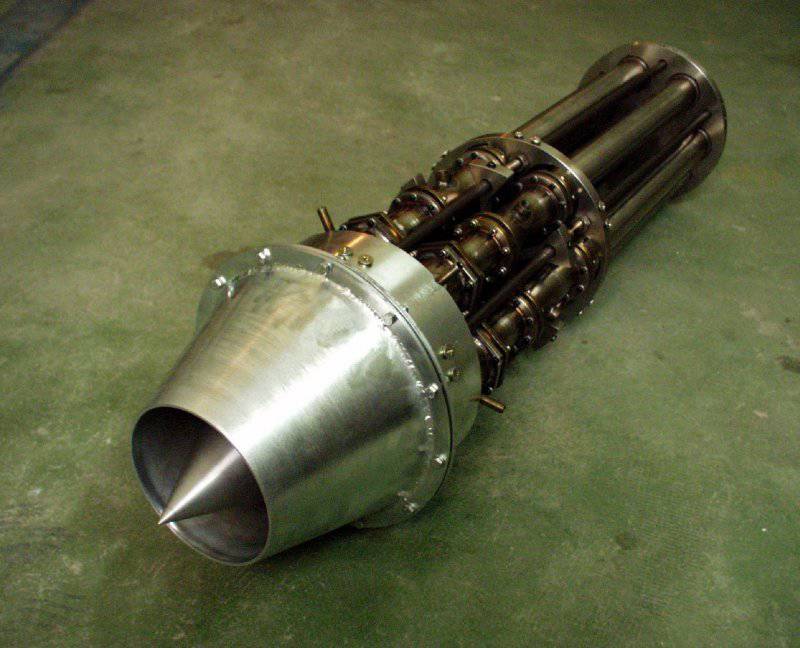 The US Navy plans to upgrade its gas turbine power plants in the future, which are currently installed on their planes and ships, replacing conventional Brighton-powered engines with rotary-detonation engines. Due to this, it is assumed that fuel savings of about 400 million dollars annually. However, the serial use of new technologies is possible, according to experts, not earlier than in a decade.

The development of rotary or spin rotary engines in America is carried out by the Research Laboratory fleet USA. According to initial estimates, new engines will have more power, as well as about a quarter more economical than conventional engines. At the same time, the basic principles of the power plant operation will remain the same - the gases from the burnt fuel will enter the gas turbine, rotating its blades. According to the US Navy’s laboratory, even in the relatively distant future, when the entire US fleet will be powered by electricity, gas turbines will continue to be responsible for generating energy, to some extent modified.

Recall that the invention of the pulsating jet engine falls on the end of the nineteenth century. The inventor was a Swedish engineer Martin Wiberg. New power plants were widely spread during the Second World War, although they were significantly inferior in their technical characteristics to aircraft engines that existed at that time.

It should be noted that at this point in time, the American fleet numbers 129 ships using the 430 gas turbine engine. Each year, the cost of providing them with fuel amounts to about 2 billions of dollars. In the future, when modern engines will be replaced by new ones, the volume of costs for the fuel component will also change.

The internal combustion engines currently in use are based on the Brighton cycle. If you define the essence of this concept in a few words, then it all comes down to the sequential mixing of the oxidizer and fuel, the further compression of the resulting mixture, then - arson and combustion with the expansion of combustion products. This expansion is just used to drive, move the pistons, rotate the turbine, that is, perform mechanical actions, providing constant pressure. The combustion process of the fuel mixture moves at a subsonic speed — this process is called dafflagration.

As for the new engines, the scientists intend to use explosive combustion in them, that is, detonation, in which combustion occurs at supersonic speeds. And although at present the phenomenon of detonation is still not fully studied, it is known that with this type of combustion a shock wave occurs, which, propagating through a mixture of fuel and air, causes a chemical reaction, which results in the release of a fairly large amount of thermal energy. When the shock wave passes through the mixture, it is heated, which leads to detonation.

In the development of the new engine, it is planned to use certain developments that were obtained in the process of developing a detonation pulsating engine. Its principle of operation is that the precompressed fuel mixture is fed into the combustion chamber, where it is set on fire and detonated. Combustion products expand in the nozzle by performing mechanical actions. Then the whole cycle is repeated from the beginning. But the disadvantage of pulsating engines is that the repetition rate of the cycles is too low. In addition, the design of these engines themselves in the event of an increase in the number of pulsations becomes more complex. This is due to the need to synchronize the operation of valves that are responsible for the supply of the fuel mixture, as well as directly by the detonation cycles themselves. Pulsating engines are also very noisy, they need a large amount of fuel for their work, and work is possible only with constant metered injection of fuel.

If we compare detonation rotary engines with pulsating engines, then the principle of their operation is slightly different. So, in particular, in the new engines a constant continuous detonation of fuel in the combustion chamber is provided. A similar phenomenon is called spin, or rotating detonation. It was first described in 1956 by the Soviet scientist Bogdan Wojciechowski. But this phenomenon was discovered much earlier, in 1926 year. The pioneers were the British, who noticed that in certain systems there was a bright luminous "head" that moved in a spiral, instead of a detonation wave having a flat shape.

Wojciechowski, using a photographic recorder, which he himself designed, photographed the wave front, which moved in a ring combustion chamber in the fuel mixture. Spin detonation differs from flat one in that a single shock transverse wave arises in it, followed by a heated gas that has not reacted, and a zone of chemical reaction is already behind this layer. And it is precisely such a wave that prevents the burning of the camera itself, which Marlene Topchiyan called the “oblate bagel”.

It should be noted that in the past, detonation engines have already been used. In particular, we are talking about a pulsating jet engine, which was used by the Germans at the end of World War II on cruise missiles "V-1". Its production was quite simple, its use was rather easy, however, this engine was not very reliable for solving important problems.

Further, in 2008, the Rutang Long-EZ, an experimental aircraft equipped with a detonation pulsating engine, took off into the air. The flight lasted only ten seconds at a height of thirty meters. During this time, the power plant has developed thrust order 890 Newtons.

An experimental model of the engine, presented by the US Navy US laboratory, is an annular cone-shaped combustion chamber having a diameter of 14 centimeters on the fuel supply side and 16 centimeters on the nozzle side. The distance between the walls of the chamber is 1 centimeter, while the “tube” has a length of 17,7 centimeters.

A mixture of air and hydrogen is used as a fuel mixture, which is fed under the pressure of 10 atmospheres into the combustion chamber. The temperature of the mixture is 27,9 degrees. We note that this mixture was recognized as the most convenient for studying the phenomenon of spin detonation. But, according to scientists, it will be quite possible to use a fuel mixture in the new engines, consisting not only of hydrogen but also of other combustible components and air.

Experimental studies of a rotary engine have shown its greater efficiency and power compared with internal combustion engines. Another advantage is significant fuel economy. At the same time, in the course of the experiment, it was revealed that the combustion of the fuel mixture in a rotary "test" engine is not uniform, so it is necessary to optimize the design of the engine.

Combustion products that expand in the nozzle can be collected into a single gas jet using a cone (this is the so-called Coanda effect), and then this jet can be sent to the turbine. Under the influence of these gases, the turbine will rotate. Thus, the turbine operation can be partially used for propulsion of ships, and in part for the generation of energy, which is necessary for ship equipment and various systems.

The engines themselves can be produced without moving parts, which will significantly simplify their design, which, in turn, will reduce the cost of the power plant as a whole. But this is only in perspective. Before launching new engines into mass production, it is necessary to solve many difficult problems, one of which is the selection of durable heat-resistant materials.

Note that at the moment rotary detonation engines are considered one of the most promising engines. Scientists from the University of Texas at Arlington are also developing them. The power plant, which was created by them, was called the "continuous detonation engine." In the same university, studies are being conducted on the selection of various diameters of annular chambers and various fuel mixtures, which include hydrogen and air or oxygen in various proportions.

Russia is also developing in this direction. Thus, in the 2011 year, according to I. Fedorov, managing director of the Saturn research and production association, scientists of the Lyulka Scientific and Technical Center are conducting research on a pulsed air jet engine. The work is carried out in parallel with the development of a promising engine, called the "Product 129" for the T-50. In addition, Fedorov also said that the association is conducting research on the creation of promising aircraft for the next phase, which are supposed to be unmanned.

In this case, the head did not specify what kind of a pulsating engine in question. At the moment, there are three known types of such engines - valveless, valve and detonation. It is generally accepted, however, that the pulsating engines are the simplest and cheapest to manufacture.

Today, some major defense firms are conducting research into high-performance pulsating jet engines. These firms include the American Pratt & Whitney and General Electric and the French SNECMA.

Thus, it is possible to draw certain conclusions: the creation of a new promising engine has certain difficulties. The main problem at the moment lies in the theory: what exactly happens when a shock detonation wave moves in a circle is only known in general terms, and this greatly complicates the process of optimizing development. Therefore, the new technology, although it has a very large attractiveness, is not realizable on the scale of industrial production.

However, if the researchers manage to deal with theoretical issues, we can talk about a real breakthrough. After all, turbines are used not only in transport, but also in the energy sector, in which an increase in efficiency can have an even stronger effect.