18 November 1699, Peter I issued a decree "On admission to the Great Sovereign service as a soldier from any free people" 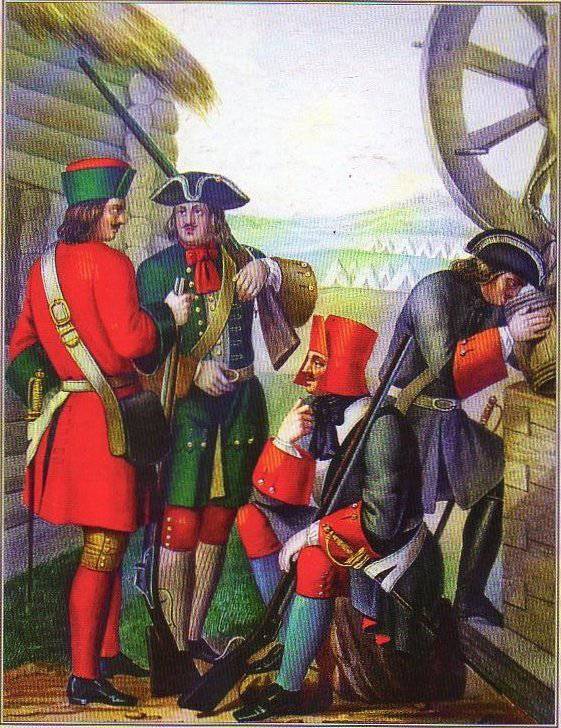 18 November 1699, Peter I issued a decree "On admission to the Great Sovereign service as a soldier from any free people" and the first recruitment. Initially, the army was tried to be built on a mixed basis (voluntary and coercive), free people fit for military service began to be written into it. Those who wished to become soldiers were promised an annual salary of 11 rubles and “grain and feed stocks”. Initially, entry into the army was in the assembly of the soldier’s hut in the village of Preobrazhensky and was supervised by Auton Golovin. Then recruitment to the army began to be made, not only in the capital, but also in Pskov, Novgorod, Smolensk, Belgorod and the Volga cities. The result of this decree was the formation of three infantry divisions, commanders of which were appointed generals Golovin, Weide and Repnin. At the same time, the formation of regular cavalry — the dragoon regiments — was going on. Recruits of the army were armed and maintained at the expense of the state. The 1699 recruitment of the year was the first step towards a regular army recruitment system. The reform itself was completed during the Northern War.

Tsar Peter considered the elevation of the Russian state and the strengthening of its military power as a matter of his life. From the very beginning of his state activity, he paid great attention to military affairs. Researchers note that belligerence was undoubtedly the innate tendency of Peter Alekseevich. In the years of early youth, the prince was interested only in toys of a military nature. In the royal workshops for the prince produced all sorts of children weaponthat little Peter laughed at and armed the children, "funny children." It must be said that such upbringing was traditional for Russian princes, since ancient times the rulers of Russia have been warriors. The first military leader of the prince was the commander of one of the foreign soldiers' regiments - Menezius (Mikhail Skopin-Shuisky began to form the "foreign system" regiments during the Time of Troubles, the second organization began in 1630 year).

After Streletsky revolt in May 1682, the transfer of rule into the hands of Princess Sophia, new conditions of life for the young prince were created. Removed from a large court, eliminated from any participation in public affairs, freed from court etiquette, Peter received complete freedom. Living in the suburban villages of Vorobiev and Preobrazhensky, the prince devoted himself almost exclusively to war games. Around "Peter" gather "amusing" - the children of the boyars, the nobles who surrounded Tsarina Natalya Kirillovna, the children of the yard people. Peter together with them indulged in the “fun of the Mars”. Gradually, "amusing" began to acquire the appearance of a military unit.

In 1684, a fortress is built on the Yauza River, with towers, walls and a moat. "Presburg" will be a collection point for "fun". A whole town arises around it. At this time, the prince went through a real military school: in any weather, he defended in the guards, built field fortifications with all of them, was at the forefront in archery, musket, javelin throwing, got acquainted with drum art, etc.

The absence of court rules allowed Peter Alekseevich to get close to foreigners, which contributed to his military education. Among foreigners a special influence on the king had the commander of Butyrsky soldiers' regiment, General Patrick Gordon. Scotsman Gordon spent a long time looking for happiness in various European countries, he passed an excellent military school in the Swedish army, served in the Polish-Lithuanian Commonwealth. He took part in the fight against the Russians, but soon accepted the offer of the Russian diplomatic agent Leontyev and entered the Russian service - a major. He distinguished himself in the Chigirin campaigns, for military skills and prowess he was awarded the rank of major general and was appointed commander of the Butyrsky regiment. Having passed practical military school, Gordon had a great knowledge and in theory - artillery, fortification, the device of the armed forces of European countries. Wise with great combat experience, Gordon was a very useful adviser and leader for the young king. Friendships have been established between them.

In addition, the Genevant Franz Lefort had a great influence on Peter's military training. From 14 years he served in the French army, received combat experience in wars with the Dutch. Lefort arrived in Russia at the suggestion of Tsar Alexei Mikhailovich and quickly mastered the Russian language, familiarized himself with the customs of Russia. Comprehensively educated, cheerful, sociable Lefort could not help but draw the attention of the king to himself. He quickly took his place among the comrades of the king. The young king listened attentively to Lefort's stories about the life and customs of European countries, studied fencing, dancing, riding, and learned Dutch. There were other foreign officers who had a significant influence on Peter, but Gordon and Lefort were the most prominent figures.

Soon, Peter from fun and fun began to move on to more serious matters. The "amusing" Preobrazhensky and Semenovsky regiments are adjoined by the Moscow regiments of Gordon and Lefort. Peter under the leadership of Gordon acquires knowledge from stories military art, at the same time passes a practical school, participating in the field activities of his squad. Conversations and lessons are combined with field exercises and maneuvers. Field maneuvers were carried out every year, starting from 1691 to 1694, and not only infantry but also cavalry and artillery participated in them. The exercises ended with exemplary battles. One of these exercises is Kozhukhovsky campaign 1694 of the year (held in the vicinity of the village Kozhukhova). The detachment of the defenders consisted of the troops of the old system - archers, and the detachment of the attackers - was a mixed, of new troops and local cavalry. The attackers crossed the Moscow River and began to storm the fortifications that the archers had built. The teachings almost turned into a real battle, so everyone was passionate about this action.

During the Azov campaigns, Peter received great military practice. After the first unsuccessful campaign, the king energetically set about building a river and sea flotilla. In a hurriedly built Voronezh shipyards under the leadership of the sovereign, work was in full swing. By the spring of 1696, thirty large ships were built, and about 1000 small, for the transport of troops, weapons and ammunition, were ready for the campaign. In May, the ground forces and the flotilla moved down the Don. As a result, the Turkish fortress blocked from the sea and land lasted only two months. July 19, 1696, Azov surrendered. Azov campaigns were the first personal combat experience for Peter. They became the best evidence that in order to fight the Ottoman Empire in the Black Sea or Sweden in the Baltic Sea, Russia needs a fleet. Peter also realized that the archery regiments and the local cavalry were no longer a first-class tool for realizing broad plans in the field of foreign policy.

Peter's journey as part of the “great embassy” (the king went to foreign lands under the modest name of the “Preobrazhensky regiment of the constable Pyotr Mikhailov”) was of great importance in terms of his personal improvement in various sciences. During the trip, the king paid special attention to military and naval affairs. Polish-Lithuanian troops in Kurland did not impress him. In Koenigsberg, Peter Mikhailov studied artillery, in Dutch shipyards - shipbuilding practice, in England - the theory of building ships, in Austria - the organization of imperial troops. On the way back, the sovereign studied the organization of the Saxon army.

Upon returning to the Russian state, the king immediately proceeds with the reorganization of the armed forces. An active assistant of Peter in the construction of the regular army was General Adam Weide. Peter begins to destroy the Streltsy army, starting with the mass executions of participants in the Streltsy Riot 1698 of the year, and the transfer of part of the archers to "live" in the county town. Part of the archers was transferred to the position of soldiers, others were sent to remote cities for garrison service (city archers in some places remained almost until the end of the century). The sovereign has an intention to form on the maintenance of the state 60 thousand infantry army.

8 (18) On November 1699, a royal decree was promulgated on the voluntary registration of regular soldiers' regiments "from all sorts of free people" and the first recruitment recruitment. "Hunting" people (volunteers) were taken with a salary of 11 rubles. per year in full state content. “Tender” people (recruits) were recruited from a certain number of yards: one warrior with 100 coch. In the village of Preobrazhensky, the Main Commission was set up to recruit, regiment, supply and train. Its leader was Golovin. Repnin was instructed to recruit people in the lower cities along the Volga. Recruitment began in December 1699. During the first set 32 was taken by thousands of people, they were sent to the formation of 27 infantry and 2 dragoon regiments.

The Russian army, before the defeat at Narva, received the following organization. The infantry regiment consisted of ten mouths of the Fusilier (from the "fusseys" - guns). In some regiments, one company was grenadier. The composition of the infantry regiment: three head officer, 35 chief officers and 1200 front combat ranks. The infantryman was armed with a 14-pound rifle, baginet (dagger with a flat, less commonly faceted blade, used as a bayonet) and a sword. Part of the infantry was armed with pikes - pikemen. In addition, corporals, sergeants, corporals, and non-combatant lower ranks were armed with pikes and halberds. The dragoon regiments consisted of about 1 thousand people. The cavalry regiment was also divided into the 10 mouth. Armed with dragoons were 12-pounder rifles without bayonets, two pistols and a broadsword.

Back in 1698, General Weide, following the German model, was drafted the first charter - the article. The main for the infantry was a system of six deployed ranks. Allowed doubling of rows and ranks. Rifle techniques were established for loading, firing, saluting, carrying a gun during a campaign, etc. For the cavalry, initially there was no charter, the dragoons were guided by infantry training. The main system for the cavalry was a full line of three ranks.

All formed regiments brought together the three highest tactical units - generals (divisions). They were headed by: Avton Golovin, Adam Weide and Anikita Repnin. The commanders of the formations were originally foreigners who formerly commanded the regiments of the "foreign system." Foreigners also prevailed among the officers. This was a mistake, as often foreigners were in a hurry to take a grain place, having neither relevant experience nor a desire to fight and, if necessary, die for Russia. Therefore, the bosses tried to teach the Russians in order to replace the foreigners more quickly.

The newly formed military units were hastily trained and after three months they showed positive results in combat training. However, the process of creating a new army only gained momentum. A real army, ready to hold back and deliver powerful blows, will be formed during the Northern War. Within a few years, the Russian army will get stronger, be tempered and surpass the first-class Swedish army in all the basic parameters.