November 17, 2012
15
In the Kodori Gorge, the stage of the most ambitious exercises of the Border Guard Service of the FSB of Russia "Sochi-2012" aimed at curbing sabotage and terrorist activities, which the border guards conducted together with their Abkhaz colleagues, passed.
The exercises are held from November 13 to 18. They are attended by units of the border departments of the FSB of Russia in the Krasnodar Territory, the Karachay-Cherkess Republic, in the Republic of Abkhazia, aviation FSB of Russia, units of other law enforcement agencies. 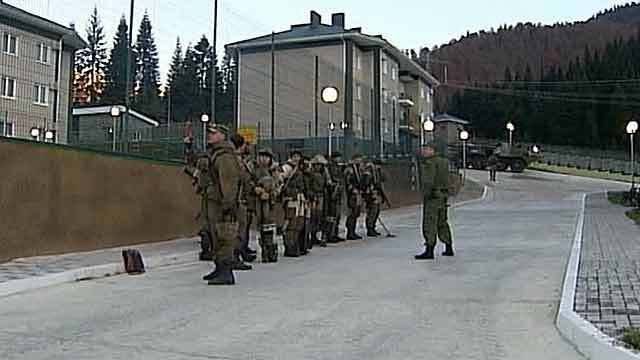 During one of the stages, the fighting group of Russian border guards blocked and destroyed “saboteurs” who tried to carry out a number of terrorist acts in the Kodori Gorge near the Saken settlement in Abkhazia.
According to the legend of the exercise, the sabotage and reconnaissance group of a conditional enemy consisting of about 15 man penetrated the territory under the protection of Russian border guards to carry out terrorist acts and capture the frontier post. The intruders discovered the border patrol, and the reinforcements that arrived arrived blocked and destroyed the bandits. The conditional battle lasted 5 minutes, reports Channel One.
Major-General Sergei Komarevtsev, Head of the Border Department of the Federal Security Service of Russia in the Republic of Abkhazia, highly appreciated the actions of servicemen during this stage of the exercise.
“I can say that we coped with the task well. There is a lot of work to do, we see these problems, we see our shortcomings, but the fact that people are prepared is a fact.”
The final stage of the exercise will be carrying out activities at sea to intercept the vessel with the "terrorists" on board.