Source: Serdyukov appointed adviser to the head of Russian Technologies 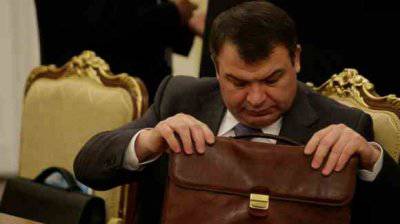 “Anatoly Serdyukov’s appointment has already taken place. In the near future, he will take up his duties as adviser to the general director of the state corporation Russian Technologies, the source said.

Official confirmation of this information has not yet been reported, Interfax reports.

According to the newspaper VIEW, on November 6, Putin dismissed Defense Minister Anatoly Serdyukov. The new head of the defense department was Sergei Shoigu, who until that time held the post of governor of the Moscow region.

In the UK, said that Serdyukov, if necessary, will be questioned as part of the investigation of the case of fraud in Oboronservis.

Anatoly Serdyukov was born in 1962, in the village of Kholmsky, Abinsky District, Krasnodar Territory. He graduated from the Leningrad Institute of Soviet Commerce with a degree in Economics (1984), and a law degree from the St. Petersburg State University (2001). Doctor of Economic Sciences.

From 2000 to 2004, he was the deputy head of the inspectorate, then the head of the Ministry of Taxes and Levies for work with major taxpayers in St. Petersburg.

In the 2004 year - Deputy, Acting Head of the Ministry of Taxes and Tax Collection.