Anomalies of the North Caucasus ("The National Interest", USA) 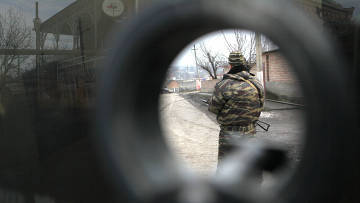 The Russian North Caucasus is in the grip of a low-intensity civil war with a strong Islamist flavor. These are the forceful actions of the petty jihadists, sustained by their incessant cyclical nature, fueled by state repression, incompetence and corruption of the bureaucracy.

Who are local leaders blamed for Islamist violence? The answer may surprise you: the United States. The Russian scientist Mikhail Alekseev, currently working at the University of San Diego, presented at the recently held conference in Washington as part of the “Program for a New Approach to Research and Security in Eurasia” a fascinating report on this phenomenon.

Alekseev quoted the statement of the Chechen leader Ramzan Kadyrov, made by him in June 2009. Kadyrov said that Washington is the "center of control" of the Islamist insurgency in the North Caucasus (this caused laughter among Washington listeners who thought they had heard any accusations against their city). Kadyrov is quite predictable in his outrageous statements; however, he was echoed by the more moderate Ingushetia’s President Yunus-Bek Yevkurov, who accused the "special services" of Britain and the United States of sponsoring religious activities in this region for the "collapse of Russia," just as the Soviet Union was destroyed. . Kabardino-Balkaria was also close by, where the Deputy Minister of the Interior sounded a similar conspiracy theory.

The federal center does not bother itself with a refutation and correction of such statements, perhaps for the reason that some Moscow politicians have similar feelings, acting either out of cynicism or naively. Here we recall the strange speech delivered by former President Vladimir Putin after the Beslan tragedy in 2004. In it, he cited the collapse of the Soviet Union and the intrigues of unnamed foreign enemies as causes of the bloodshed (but not quite the obvious local catastrophe in neighboring Chechnya). Judging by public opinion polls, most Russians think the same way. In a survey conducted in September 2008 by the Center for VTsIOM, respondents from different parts of Russia were asked what the US goals are in the North Caucasus. 60 percent of them responded as follows: "Military and strategic interests, as well as the deployment of military bases."

Alekseev identified two causes of anti-Americanism in this region. One of them is the international isolation of the North Caucasus. There is virtually no foreign investment and a European presence, and even with the Muslim world there is little contact. This region is like a sealed room without windows, where the local population is inclined to think in terms of the Cold War. A more recent wave of anti-Western sentiment that arose during the 2008 war in Georgia is layered on this. Then many residents of the North Caucasus were convinced that the United States was behind the Georgian attack on South Ossetia.

From the point of view of rational thinking, all this, of course, looks like madness. The North Caucasus is an acute security problem in Russia, and it cannot cope with this problem. As the Winter Olympic Games approach Sochi in 2014, Russia is experiencing an ever-increasing need to take control of the situation. However, this year attacks have intensified, especially in Chechnya. The recent militant attacks on the ancestral village of Ramzan Kadyrov by Tsentoroy and the building of the Chechen parliament in Grozny were a powerful symbolic blow to Kadyrov's statements that he had fulfilled his terms of the deal with Putin and “stabilized the republic”. The new economic governor-general of this region, Alexander Khloponin, summoned from Siberia to create jobs, also predictably failed and could not overcome the obstruction of local clan leaders, such as Kadyrov. Russia needs help to stop a further slide towards disaster. It would be logical to assume that this implies the use of new reserves of trust created by the "reset", as well as appealing to the United States for assistance in gathering intelligence information, strengthening borders and engaging new methods of fighting militants.

But instead, an irrational beginning takes precedence. The Russian leadership continues to strengthen Kadyrov’s positions, although this man poses a greater threat to his interests than pro-Western Chechen nationalists, such as Aslan Maskhadov and Akhmed Zakayev, who have been persecuted by the Kremlin for many years. Kadyrov’s latest award was the resumption of international flights at Grozny airport. Meanwhile, courageous individuals who are trying to hold the Chechen despot accountable are harassed. Human rights activist Oleg Orlov, who for many years defended the interests of ordinary people in the North Caucasus, recently went on trial, accused of “slandering” Kadyrov.

Georgia, which no less needs stability at its northern borders, is also playing an irrational game. The Georgian authorities have embarked on a new policy of rapprochement with the North Caucasus, which, according to the Russians, is a strategy for separating this region from the rest of Russia. President Saakashvili unilaterally announced the maintenance of a visa-free regime for the North Caucasian republics and spoke to the UN with his own idea of ​​a “unified Caucasus,” including its south and north. Such ideas would be commendable, express them to the poet or even a businessman. But when the President of Georgia speaks about this, they only increase Russian paranoia and Russian-Georgian tensions.

The foolishness here has become a new order of things, and it will be so until someone decides that it is time to turn this page.