A small but important thing. What makes the Russian fleet in the Horn of Africa 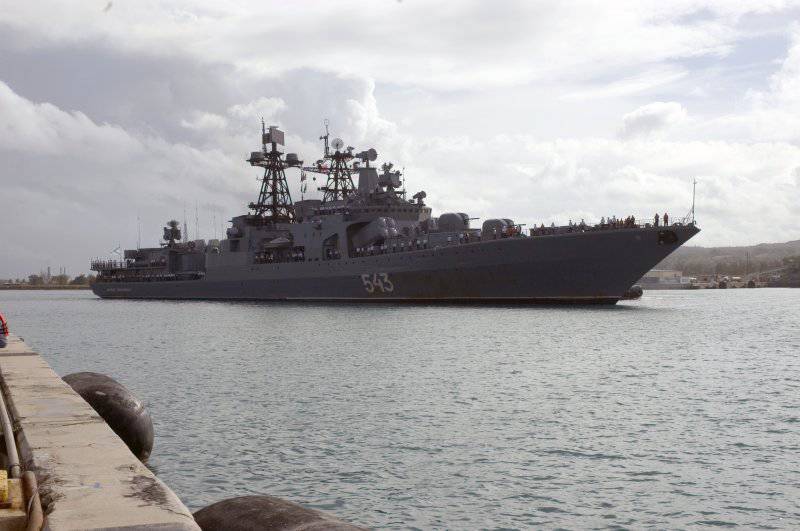 The next detachment of the Russian Navy went to the Gulf of Aden 2 region of November 2012 of the year. The “Hat” came out of Vladivostok - the Marshal Shaposhnikov BOD, accompanied by the Irkut tanker and the Alatau rescue tug. On ships, in addition to full-time crews, there are units of marines, and the BOD also carries both full-time helicopters.

This is the eighth campaign "on pirates" for the ships of the Pacific fleet, and the second for Shaposhnikov. At the same time, in his previous raid in the spring of 2010, “Shaposhnikov” distinguished himself: it was his squad of marine corps, landed from motorbots and a helicopter, that freed the Moscow University tanker captured by pirates.

The release of “Moscow University” is an indicative episode, but the main task of the operation as a whole is not the release of captured ships, but the prevention of their capture. At the same time, freedom of navigation in the Horn of Africa is essential for Russia: merchant ships flying the Russian flag pass the Bab-el-Mandeb Strait to either side daily, and ships of Russian companies or with Russian citizens in crews, regardless of flag, are even more often. Thus, the activities of the Russian Navy in the region directly protect both the interests of the country and the life, freedom and property of its citizens.

Russia is not the only country fighting pirates in these waters. The largest representation of the fleets of EU countries - Europeans conduct their permanent operation “Atalanta” (EU-NAVFOR-ATALANTA), within which 6-7 combat units constituting Task Force 465 are permanently present in the region - this designation is assigned to this compound as part of the operation . The main burden in the "Atalanta" are borne by the French, Spanish and German naval forces, with the participation of the Italian, Dutch and other European fleets.

NATO is conducting its own, separate operation from the EU. Operation Ocean Shield (Ocean Shield) is carried out mainly by the US Navy and the British Royal Navy, with periodic involvement of other NATO allies, including the Portuguese, the same Italians and the Dutch, the Turks, and non-NATO partners Japan, South Korea and China.

Finally, ships from India and the Gulf countries are constantly present in the region. Presented and aviation - patrol aircraft of various countries actively fly from coastal bases.

Such a concentration of anti-piracy efforts in the Horn of Africa should not be surprising: along with Gibraltar, Suez and the Malacca Strait, through the Gulf of Aden and the Gate of Sorrow (better known as l Mandeb or Bab el-Maneb Strait) goes one of the busiest sea routes. If the traces on the water kept at least a day - then the surface of the ocean in this area would constantly have a white color. About half of the Persian Gulf oil production goes through this area, and most of the “container” exports of China to the European Union. Therefore, piracy here daily causes very substantial damage - both directly and indirectly, raising the price of insurance.

Who are friends against?

It would seem that the high activity of the Navy of various countries should exclude attacks of pirates, but their number and difficulties with identification - an external inspection practically does not allow to distinguish pirates from ordinary fishermen, especially since the fishery is often changed by both of them - leave "gentlemen of luck" a lot chances.
At the same time, the strengthening of the international presence and the change of shipping routes forced the pirates to change tactics. Initially operating from bases on the coast, they switched to the use of floating bases - relatively small ships that can accommodate motor boats and their crews. Outwardly, these floating bases are disguised as fishing vessels and local small transport workers.

The presence of floating bases dramatically expanded the pirate horizons - if before there were rare attacks on distances more than 200 miles from the Somali coast, now even a thousand miles is not a sufficient guarantee against seizure of the vessel and ransom requirements.

Nevertheless, you can protect yourself - those shipowners who use the recommended protected routes usually have no problems, but the rushing, short-sighted and other “lost caution” captains and shipowners is enough to pirates do not feel deprived.
Russian prospects.

The Russian Navy's anti-piracy operation continues - and in the coming years it can be expanded: the military department is negotiating with French colleagues, offering to deploy two Il-38 patrol aircraft at the French airbase in Djibouti. The appearance of these machines and the coordination of actions with the French, constantly containing there three patrol aircraft will increase the controlled water space. For the Russian Navy, the main result of the operation is the constant maintenance of interaction between the fleets and the good maritime practice gained during the campaigns.

Speaking of other benefits, in addition to the indirect economic effect - in the form of reducing the risk of costs for the purchase of ships and crews, as well as reducing the size of the insurance premium, it should be noted, and direct political bonuses. The actual participation in a large international operation with active interaction, carried out despite the fact that the Russian detachment is not included in either Atalanta or the Ocean Shield, provides an example of active military cooperation between Russia and Western countries in the common interest. In addition, this activity also works on the image of Russia, which is especially important in the modern world of information wars - the better, the more effectively our fleet fights against pirates.

In the foreseeable future, Russia's presence in the region may increase - in particular, at the expense of the new generation ships: the 20380 corvettes are already in service, and in the next year or two the fleet will receive new frigates with an appropriate cruising range and reserve autonomy. It is quite possible, if the Black Sea Fleet receives its first connection of new ships, Russia will be able to save significant funds - the distance from the Black Sea to the Horn of Africa is much less than from Vladivostok.