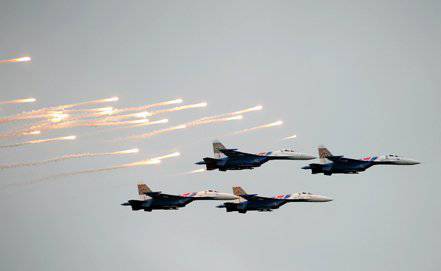 The real sensation made aviation aerobatics group "Russian Knights", speaking today at the international aerospace exhibition in the southern Chinese city of Zhuhai. On five Su-27 heavy fighters, Russian aces presented a half-hour program, replete with sophisticated elements. Thousands of enthusiastic spectators saw in the sky a virtuoso flight in a rhombus, on-board aerobatics, a barrel and other "miracles in turns".

The last time "Russian Knights" appeared at the Zhuhai Air Show only in 2006 year. However, the right to open the current exhibition was not honored by them, but by their Chinese colleagues from the aerobatic team “First August” of the Air Force of the People’s Liberation Army of China. They presented an extensive flight program on six J-10 (Jian-10) combat aircraft. This lightweight single-engine multi-role fighter, developed by Chinese designers with the assistance of Israel, was put into service at the end of the 2006 year. These machines are equipped with Russian turbojet dual engine (TRD) AL-31FN.

European aces from the crew of the Brightling Jet Tim also demonstrate their mastery these days. They perform the toughest pieces on seven L-39 training aircraft.

The current exhibition in Zhuhai - the ninth in a row since 1996 - has become the largest in the whole history its holding. About 650 companies from 39 countries and regions demonstrate their products here. In total, on the airfield, the viewers are presented with the order of 90 aircraft.