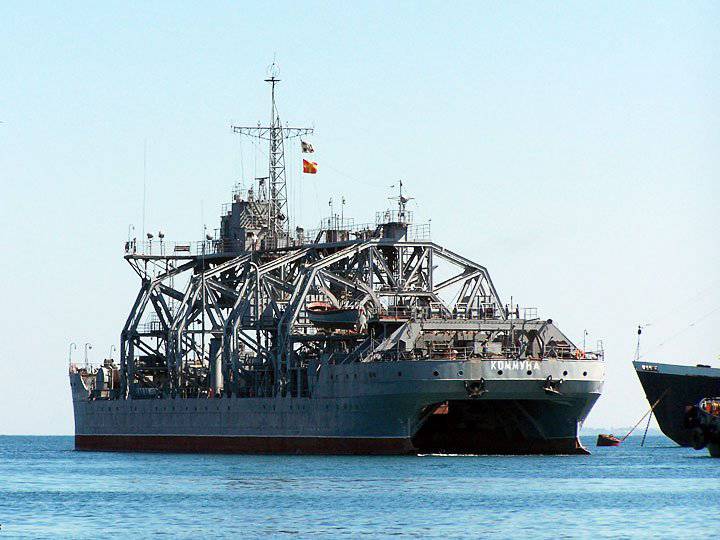 The oldest rescue vessel of the Russian Navy fleet "Commune" celebrated the centenary of the bookmark. For its long and eventful service, the Commune, designated during the construction of the Volkhov, successfully solved ship-lifting and rescue tasks during the First World War, repaired submarines and ships during the Great Patriotic War, was a submarine base and carrier of very small submarines. At present, the vessel is equipped with a modern complex of the Panther Plus underwater telecontrol apparatus and successfully performs the tasks of the search and rescue service.

The honor of raising the flag of St. Andrew’s was given to a veteran of the rescue ship Kommuna to lieutenant colonel Vladimir Kartsev. At the solemn meeting devoted to the centenary anniversary of the laying of the vessel, the crew members were presented with certificates and thanks for the careful attitude to the ship and the preservation of the traditions of the Commune.

The ship "Volkhov" was laid on November 12 in the 1912 year in Petrograd at the shipyard of the Putilov factory and was intended to lift sunken ships and rescue submarines. The ship "Volkhov" participated in the revolutionary events and in the civil war, serving the submarines of the Red Baltic Fleet. In March 1922 of the year, at the general meeting of the team, it was decided to rename the vessel, and the 31 of December (on the day of the formation of the USSR) the rescue ship received a new name - "Commune". During its service during the First World War and the Great Patriotic War, the vessel Kommuna assisted more than a hundred ships and submarines.

The veteran ship arrived in Sevastopol in 1967, and at Sevmorzavod it was converted into a carrier vessel of deep-water vehicles.

PAVEL DEEV, Senior Assistant Captain of the rescue ship "Commune":
"The displacement of boats increased and exceeded a thousand tons, the task of the Commune changed to rescue crews. Recently, an underwater autonomous vehicle, the 5, was on board that could descend - it was a small special purpose submarine - it could stick to a submarine. And at one time, the 22 man switched to this unit and was delivered on board.

This unit was transferred to the Baltic. The Kommun was equipped with the modern Panther Plus submersible remote control system.

PAVEL DEEV, Senior Assistant Captain of the rescue ship "Commune":
“It can work up to a thousand meters and transfer livelihoods to a submarine; it can connect ventilation hoses, electrical cable, and through a torpedo tube, lock canisters with food, medicines, and warm clothes there. Due to this, you can extend the life of the crew. "

“Commune” is called the “pearl” of Russian shipbuilding, the legend of the imperial fleet. Today it is the only vessel of such respectable age from the active ones.

PAVEL DEEV, senior assistant to the captain of the rescue ship "Commune": "There are ships older - but they are all not active -" Aurora ", there are battleships in America. The commune is the only vessel that can perform the tasks that it performed. We have everything in order. Therefore, we are proud. "

MARGARITA PORNINA, correspondent:
“The navigating bridge is located at a height 22 meters above sea level. And here is the main command post - the pride of the Commune. "
The steering wheel, machine telegraph - here we managed to keep everything in its (original) form.
There are not many ships in the world that have reached the age of one hundred. The Commune does not just stay afloat, it continues to carry out the tasks assigned to it. Sailors say the secret to the survivability of a ship is in the unique material of which its hull is made. Then applied a special viscous forging Putilovskaya ship steel. Unfortunately, the recipe for making metal that has no analogues in the world has been lost.
The housing of the Commune is practically resistant to corrosion and wear.

History The oldest vessel has many legends. One of them is about a golden rivet.

PAVEL DEEV, Senior Assistant Captain of the rescue ship "Commune":
"For the construction of the Commune, one thousand three hundred and sixty poods of rivets were used. If all the rivets to collect and weigh, it turns out 1360 pounds. I think it's a bit much. It is said that among them one golden rivet. According to the legend, it was the captains who invented it, so that when cleaning the hull of the vessel, the people tried to clean it better, trying to find this rivet. You saw rivets, if one is gold - there will not be one hundred grams of gold there. ”

Another interesting story. In the 1984 year, when the military crew of the ship was disbanded, Kommun was thoroughly looted. They couldn’t carry out an armchair piano - a gift from the emperor, since they brought the instrument together with the construction of the vessel and now it is impossible to remove it. The piano of the oldest Russian empire piano company “Diederichs Fyres” (Diederichs fraRair) with the aristocratic design of the era of Nicholas II adorns the mess room of the Commune since 1912. Inside the instrument - the coat of arms of the Russian Empire and the date of manufacture - 1898 year.

And in 2010, St. Nicholas Naval Church appeared on the “Commune”. The crew of the vessel hopes that the ship’s church will save the Commune from cutting. Who will raise a hand to the shrine? Although, it is too early to talk about the write-off of the Commune. Despite its venerable age, the ship adequately carries the St. Andrew's flag, actively participating in various activities of the fleet rescue service related to going out to sea. - transmits NTS