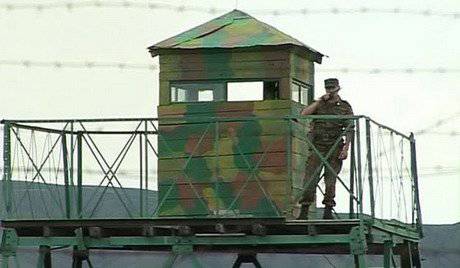 In Kazakhstan, began a loud trial. In the dock - Private Vladislav Chelakh, who is accused of brutally killing fourteen colleagues at once. The correspondent of the Voice of Russia in Kazakhstan said that the situation around the “Chelakha case” was heated not only in the courtroom, but throughout Kazakhstani society.

The tragedy occurred at the end of May at the border post "Arkankergen", which is located on the border of Kazakhstan and the People's Republic of China. The post did not get in touch for two days, and later the search group found only ashes and fifteen corpses in its place.

The investigation of the massacre at the Arkankergen post lasted for almost five months. The investigation involved the best operatives of several security agencies at once - the Ministry of Internal Affairs, the General Prosecutor's Office, the National Security Committee and the Military Investigation Department. Experts have done a truly titanic work, the count of interrogated witnesses goes to hundreds, all the soil and ashes from the scene of the tragedy are sifted literally through a grain of sand. And so, today in the city of Taldykorgan - this is the administrative center of the Almaty region - a preliminary hearing on this case took place, and it already brought the first sensation - the main accused Vladislav Chelakh unexpectedly refused a trial with the participation of jurors.

This is what the defendant’s lawyer, Felix Arsenov, said on this matter:

"Once again I want to repeat why we refused the jury. Because, by manipulating the jury, they could get a guilty verdict, and then they would wave it as a banner. They said that he, the voice of the people, would recognize the 10 his guilty. "

The decision to hold the court with the participation of jurors earlier just initiated the defendant and his lawyers. They explained their decision by a large public response. But today they changed their minds, although the resonance did not diminish at all. On the Internet on the pages of various Kazakhstani newspapers discuss the most incredible versions of the incident at the border. Today’s preliminary hearing was held behind closed doors and the working points of the future process were discussed. Vladislav Chelakh himself was also present at the meeting, he was brought in an ordinary paddy wagon without additional protection. It is known that the main court hearing will begin on November 19 and it will be open.

This is what Nurdaulet Suindikov, the official representative of the General Prosecutor's Office of Kazakhstan, said on this score:

"The prosecutor's office intends to court clearly, not relying on speculation and rumors, but on objective data to confirm the circumstances underlying the charges. All interested persons can take part in the judicial review, which will enable everyone to objectively evaluate the facts and evidence on which the materials are based criminal case. "

Private Vladislav Chelakh was found three days after the discovery of a burnt border post. It is located in 25 kilometers from the outpost. During the detention, Chelakh was found mobile phones and other things of the deceased border guards. During the investigative experiment, the soldier described in detail how he had killed his fellow soldiers. However, after consulting with lawyers and relatives, Chelakh withdrew his confession, without offering any alternative version of the events. An interesting fact is that two of the 15 bodies found on the ashes have remained unidentified. Identify the remains could not even experts from Germany.

Ordinary Chelakh was charged immediately under nine articles of the Kazakhstan Penal Code. In addition to the massacre, committed with particular cruelty, he is charged with desertion, theft and destruction of state property.