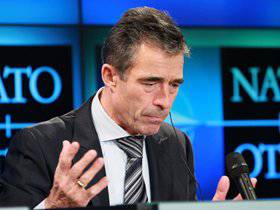 NATO countries must stop cutting military budgets and re-proceed to increasing defense spending. Such was the keynote of today's speech by the Secretary General of the Alliance, Anders Fogh Rasmussen, at the 58 session of the NATO Parliamentary Assembly, which ends here.

"Defense spending is reduced in all countries of the alliance. We need economic recovery. And based on this, we need recovery in the area of ​​defense spending," he stressed. According to Rasmussen, it is first necessary to “stop the cuts,” and then proceed to increase allocations for defense purposes. “Freedom does not come for free. And any decision made to improve our economy should not plunge us into another kind of crisis — into a security crisis,” he said.

As the main reasons that should prompt the governments of the countries of the North Atlantic Alliance to increase defense spending, he called the policy of the Russian Federation and the People's Republic of China in this area. "By 2015, China will surpass eight major European members of NATO together in military spending. And Russia intends to double its defense budget from 3 percent to 6 percent of GDP over the next 10 years," the head of the alliance said.

According to Rasmussen, compared with 2009 year, the total expenditure of NATO countries on defense in 2011 decreased by 56 billion dollars. Only 6 of the European members of NATO increased their military budgets in 2011, however their growth was insignificant.