To award posthumously with the presentation ...

November 13, 2012
62
July 13, 1942 at the commander’s platoon tanks LF Lieutenant Konovalov did not ask. In the battle on the eve of his KV received several hits of German shells, which led to a violation of the fuel supply to the engine. The malfunction seems to have been eliminated, but on the march as part of the brigade, the fuel supply again stopped. The car stood near the Nizhnemityakinskoye farm (Tarasovsky district of the Rostov region). 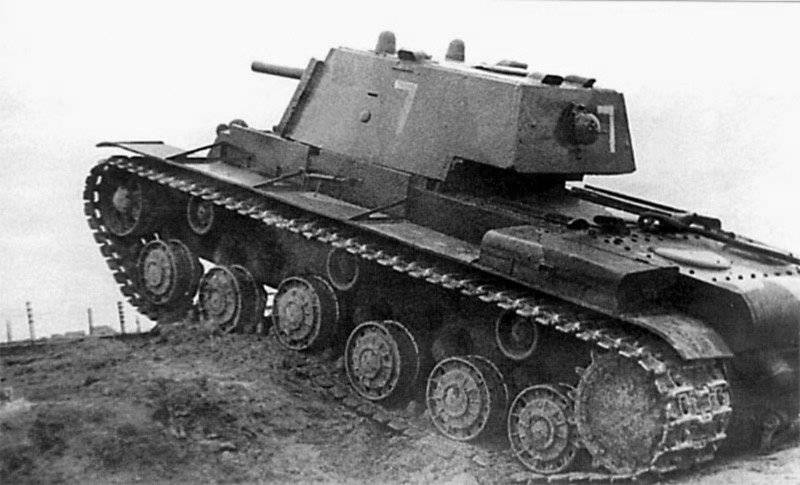 Pushkin's commander-15 couldn't wait. He ordered Lieutenant Serebryakov to help Konovalov with repairs, warned about the possible appearance of the Germans (there was no solid front line here), in which case their advancement should be delayed for the maximum possible time, and the crew left for the destination.

Together, the tank crews fixed the car and were about to go after their own, but at that moment two German armored cars appeared on the nearest knoll. While the Germans were analyzing the situation, Konovalov had knocked out one armored car, while the second managed to escape. It was not possible to contact our people by radio: the brigade had already gone far. It remained to carry out the order on their own.

The next day, the brigade reconnaissance team inspected the battlefield. The turret and mehvodovsky hatches of a burned-out tank, which had been burned out by German shells, were closed. Interviewed locals added details. Kombrigu was reported on the feat and the heroic death of the crew — commander Konovalov, senior mechanic officer Kozyrentsev, commander of the gun Dementiev, loading Gerasimlyuk, junior mechanic director Akinin, and radio telegraphist Chervinsky, along with the brigade technician Serebryakovy who was with them. And the telegrams flew, relatives familiar to notify ... 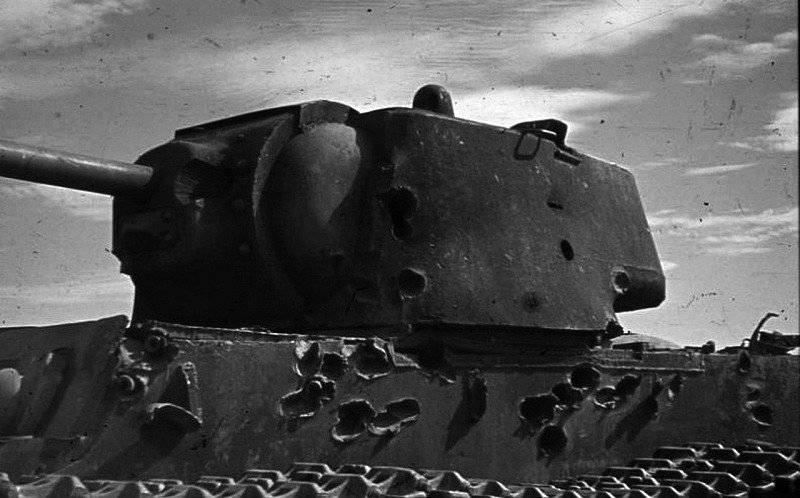 Description of the feat of the award list (spelling and punctuation preserved):
"13 July 1942 of the year, in the district of N-MITYAKINSKOE 2, tank" KV "lnta KONOVALOVA stood because of a malfunction after the battle. The crew restored the tank on their own. At this time 2 German armored vehicles appeared. Comrade KONOVALOV The 1 immediately opened fire and the car was set on fire, the second quickly disappeared. Following the armored cars, a moving column of tanks appeared, first 35 machines, and then another 40. Progress towards the village. LNT KONOVALOV, using the advantageous position of his masked tank, decided take the fight. Letting the first column of tanks on the 500-600 meters, the crew of the KV opened fire. The 4 tank was destroyed by direct fire. The convoy didn’t accept the battle, returned back. But after a while, the village was attacked by 55 tanks. The LNT KONOVALOV decided to continue the fight against the armored vehicles of the German fascist invaders, despite this overwhelming superiority. The heroic crew set fire to the 6 tanks again, which made it roll back a second time. The enemy is making a third attack. Heroes-tankers, led by their Komsomol commander Comrade. KONOVALOVYY, are firing at the tanks and cars pr-ka to the last shell. They also destroy 6 enemy tanks, 1 armored vehicles and 8 vehicles with enemy soldiers and officers. The Soviet fortress is silent. The Nazis open fire from 105mm guns, which pull up to the tank at a distance of 75 meters. The crew of the tank with the Hero-commander Lieutenant KONOVALOVY along with the tank died in this unequal battle. Defending our Motherland from the German invaders, ln nt KONOVALOV showed courage, unshakable resilience, selfless heroism. For the heroism shown in defending the Motherland, Comrade. KONOVALOV is worthy of the posthumous assignment of the title "THE HERO OF THE SOVIET UNION" with the award of the Order of LENIN and the GOLD STAR Medal.
COMMANDER 1 TANK. BATALION
SENIOR LT / VASILKOV / " 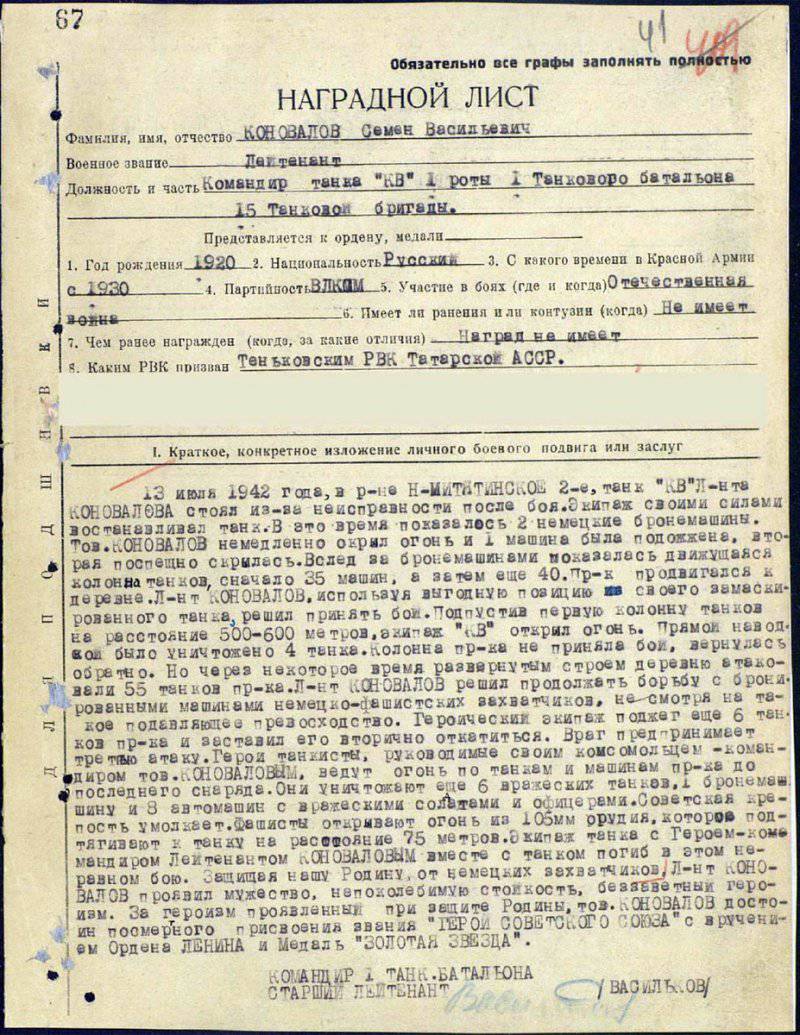 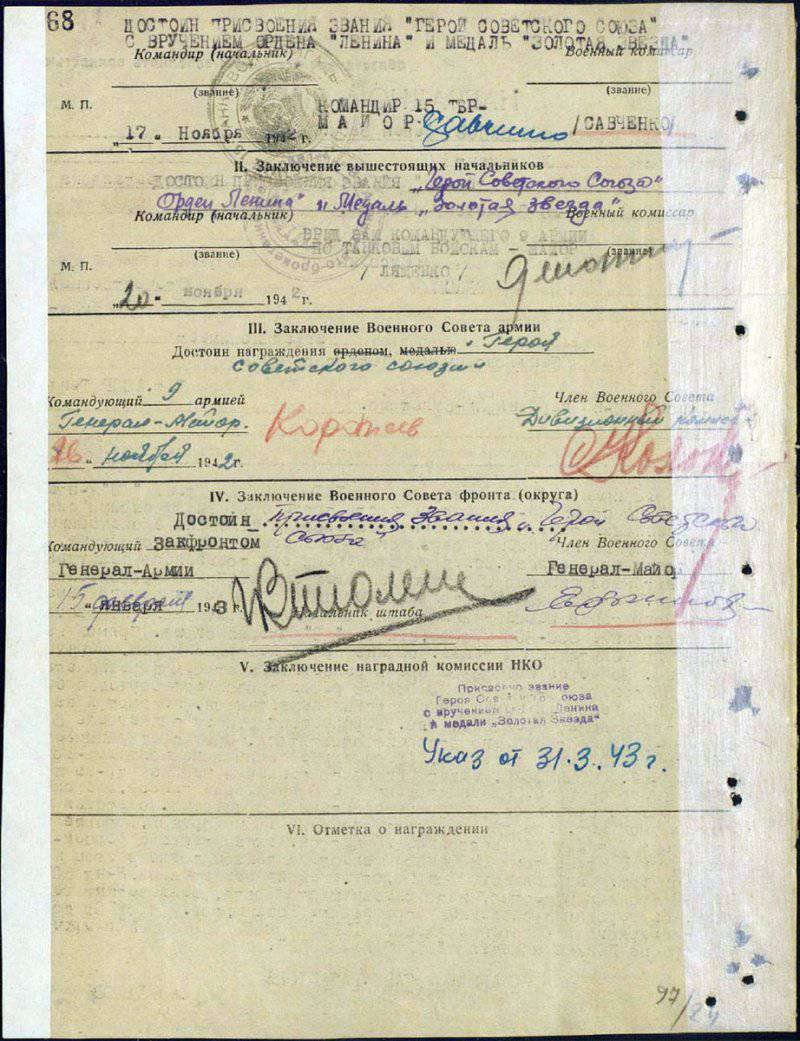 The phrase of Vasilkov’s battalion commander “is worthy of posthumous appropriation ... with awarding” was partly prophetic.

After repeated direct hits completely immobilized the tank, and the ammunition came to an end, Konovalov ordered: after the last shot, the crew immediately leaves the car through the emergency hatch in the bottom. The last shot of the KV cannon almost coincided with the first shot of the Germans pulled up to shoot a malicious fortress at close range of a 105-millimeter cannon.

And nevertheless, the three who did not die immediately managed to get out of the car, removing one of the machine guns from it: the commander, the Serebryakov technician and the Dementiev turret. They crawled away to a safe place, and at nightfall they began to make their way east to their own.

Fearing betrayal and captivity, they tried not to go into the settlements, ate literally pasture food - raw grain, grass. On the fourth day of the journey, three tank crews found a German tank, invitingly standing with open hatches.

Rightly judging that it is better to go any way than to go, the tank crews decided to “take” it. Creeping up to the car, Serebryakov scored one tankman guarding it with the butt of a machine gun, and Dementiev laid down the second of the gun. Meanwhile, Konovalov shot the commander and driver of the enemy machine. Tankers brought the captured trophy and at full throttle moved to their.

So, on the enemy machine, successfully avoiding the fire of anti-tank weapons on both sides, they came out, or rather, drove out to their own ones, rejoicing that the crazy Fritz had come to surrender. True, they came quite far from the location of their brigade, and were enrolled in the new unit.

The impudence of Semen Konovalov was appreciated: he commanded the trophy for about a month, knocking with it in the battles of at least three German tanks.

After clarifying all the circumstances, the submission to the Hero was not rewritten, and the Decree was signed on March 31 of 1943. 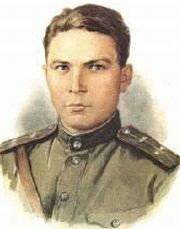 Semyon Vasilievich Konovalov reached Victory and in 1946, he was transferred to the reserve. However, in 1950, he was again called in, two years later he graduated from the Leningrad Higher Officer Armored School, but after the beginning of the Khrushchev army reduction in 1956, Lieutenant-Colonel Konovalov was finally dismissed.

Donkey Konovalov in Kazan, where 25 worked for years as a senior engineer at one of the factories. He led a large public work, often spoke to young people, was a non-staff lecturer of the society "Knowledge". Died hero 4 April 1989, was buried in Kazan at Arsk cemetery.