Lisichansk and Severodonetsk: life in ruins 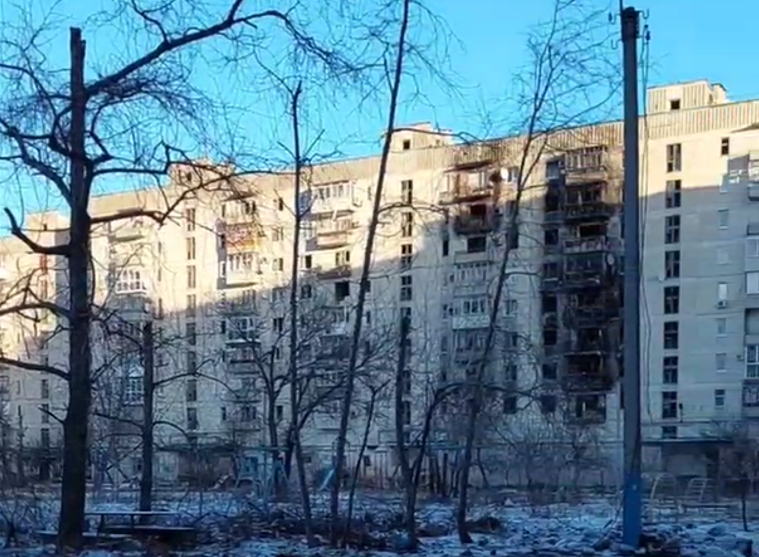 The gloomy skeleton of a multi-storey building, part of which was covered with black soot from the first to the last floor, reminiscent of the fire raging here, looked completely lifeless. The windows of this sad building are either sealed with film or plywood, or generally represent uncovered holes in which the wind whistles. It seemed that the house had been abandoned for a long time and no one had lived in it for a long time. However, this impression is deceptive. The driver of a car with humanitarian aid starts to honk, and after a few minutes people start leaving the house. Living witnesses of the horrors of war that reigned not so long ago in this city.


There are a lot of such houses in Severodonetsk and Lisichansk. In some of them, light and gas have already appeared, in some not yet. However, there is still no heating anywhere. There are also problems with water - because of the frost, the pipes froze, and therefore water does not reach the apartments.

There is already electricity and gas in Severodonetsk, work is underway to replace the heating systems, but it is not known when they will be launched. Many houses are still without glass, the temperature in apartments is from +8 to +18 degrees.

“We heat with heaters, the temperature in the apartment is + 12-14 ° С. As it turns out, when it rained, there were more. There is gas and electricity, but we carry water from the basement,

Most people do not have expensive and high-quality electric heaters, and fan heaters (“duichiki”) heat quite weakly. Local authorities do not even issue films to somehow close the windows - local residents either have to buy them at their own expense or order volunteers.

In Lisichansk, the situation is more difficult than in Severodonetsk - there is still no electricity, central water supply and heating in the city. Only gas is supplied to the houses. For this reason, the issue of the availability of means of heating for local residents is, in fact, a matter of their survival (see below). video).

Last fall, the author of this text organized a fundraiser for potbelly stoves (then they managed to raise a small amount for which 8 potbelly stoves were made, you can read more in the material Severodonetsk agglomeration in the zone of humanitarian catastrophe: how the north of the LPR lives). At the same time, the director of SIBTEPLOENERGOMASH LLC (Novosibirsk region) Sergei Beleush came to me, who expressed his readiness to manufacture potbelly stoves absolutely free of charge for the needs of the population and deliver them to the indicated coordinates.

At the moment, Novosibirsk has transferred a batch of 60 bourgeois women to the LPR, which, thanks to volunteers from the family affairs department of the Lugansk diocese, which delivers humanitarian aid to the Severodonetsk agglomeration, were delivered to the city of Lisichansk. Lists of those in need were prepared for two weeks.

In general, the humanitarian situation in Severodonetsk and Lysichansk remains difficult. At the same time, back in December, the LPR government set temporary tariffs for utilities in the territory of Severodonetsk, Lisichansk and the Kremensky district, and, in particular, tariffs for water supply. This raises certain questions, given that there is no water at all in Lisichansk, and in Severodonetsk people carry water from basements due to frozen pipes.

The extremely slow pace of restoring the infrastructure of cities in the north of the LPR also raises questions - a difficult situation has developed not only in Severodonetsk, Lisichansk, Kremennaya, but also in smaller settlements, for example, in Gorsky. In the LPR, such a slow pace of recovery is explained by the ongoing hostilities in the region.

For example, a deputy of the People's Council of the LPR Olga Kobtseva recently saidthat the restoration of the infrastructure of the city of Rubizhnoye, which is part of the Severodonetsk agglomeration, will become possible only after the stabilization of the situation on the line of contact. Local residents, however, from these explanations are not easier.

Instead of really helping people, for example, by providing those in need with potbelly stoves, or at least films and plywood to seal windows and insulate apartments, the authorities nod at the fighting. While real help to local residents is provided by volunteers at their own expense and at the expense of donations from ordinary citizens.