November 12, 2012
3
The advent of supersonic strategic bombers, such as the Hastler B-1950 Hustler, in the USA at the end of the 58, and the work of creating even more high-altitude and high-speed machines XB-70 Valkyrie, as well as the SR-71 scouts, Blackbird set up USSR industry task to create an effective means of opposition. By this time, the Mikoyan Design Bureau already had experience in creating supersonic interceptors. The latest experimental aircraft of this series, the E-150 and E-152, for the first time in the USSR, showed the possibility of flying at a speed of 3 000 km / h and reaching a height of flight of 22-23 km (while flying at high supersonic speed was limited).

The achieved high-altitude performance was quite enough for the fighter-interceptor being created, and for the successful struggle with the new American aircraft B-58, XB-70 and SR-71, it had to have a radar with a greater target detection range, have much greater boundaries intercept and be equipped with all-advanced air-to-air missiles with a long launch range. To create a machine that meets these parameters and received the designation E-155 in the Design Bureau. A.I. Mikoyan started in 1961 year. As part of the design of the new machine, the experience gained in creating the E-150 and E-152 fighters was taken into account. The experience gained in the use of structural materials capable of withstanding strong thermodynamic heating during a flight at high supersonic speed was very important. We also used the groundwork for the low-pressure turbojet P15-300 engine and automate the interception process.

The proposals developed at the A. I. Mikoyan Design Bureau found support from the leadership of the Defense Ministry, and 5 February 1962 saw the light of the decision of the USSR Council of Ministers and the CPSU Central Committee on the development of the E-155P fighter-interceptor and the creation of the E-155Р high-altitude reconnaissance aircraft on its basis. In the same year, a mock-up commission for a new fighter was held. With its appearance, the E-155 was not like any of the fighters that existed at that time. E-155 were going to equip the side flat air intakes with a horizontal wedge, a thin trapezoidal wing of small elongation and two-tail fin.

The large take-off mass of the fighter (more than 35 tons) and unique altitude and speed characteristics (speed of about 3 km / h, maximum ceiling of 000-22 km.) Dictated the choice of the power plant, which consisted of 23 turbofan engines of type R2B-15, which in afterburner gave out traction of 300 kgf each. Engines were installed side by side and located in the rear of the fuselage. The creation of a fighter-interceptor with such high intercept lines and high-speed characteristics was associated with the need to overcome the thermal barrier. It was obvious that traditional structural materials used in aviationwill not be able to be used in conditions of prolonged heating up to temperatures of about 300 degrees Celsius, which arose during supersonic flights with M> 2.5. Realizing this, special stainless steels were used as the main structural materials for the E-155 fighter-interceptor: VNS-2, VNS-4 and VNS-5 (up to 80% of the total weight of the structure), as well as titanium alloys (about 8 % mass) and heat-resistant aluminum alloys D-19T and ATCh-1 (approximately 11% of the mass). The main technological process in the production of a fighter airframe was the automatic welding process.

In 1962-63, at the experimental production of OKB-155, work began on building 4's first prototypes of the E-155: 2 as an interceptor and reconnaissance aircraft. The assembly of the first E-155P1 model was completed in the summer of 1964. On August 12, the plane was redeployed to the flight station of the OKB in Zhukovsky and already on September 9 test pilot P. M. Ostapenko raised the fighter for the first time into the air. A year later, the second vehicle, the E-155P2, entered the flight tests. To speed up the testing process, in parallel, the production of experienced fighters was started at the plant # XXUMX located in Gorky. 21 was joined to the state tests by another 1966 interceptor fighter: E-2P155 and E-3P155. Unlike the first two fighters, they had 4 missile suspension points (the first prototypes carried only X-NUMX K-4 missiles).

In 1966, the Mikoyan Design Bureau carried out work to introduce into the design of the created aircraft both interceptors and reconnaissance aircraft of a significant amount of various kinds of design improvements. These include: lengthening the nose of the fuselage, changing the cockpit equipment, using autonomous engines using a turbo starter and alternator drives, strengthening the wing, increasing the keel area, modifying the air intake control system, using new flippers without conventional protivoflatternymi cargoes, the use of the wheel-ski chassis (not implemented in practice), the replacement of parts of aircraft equipment more advanced. 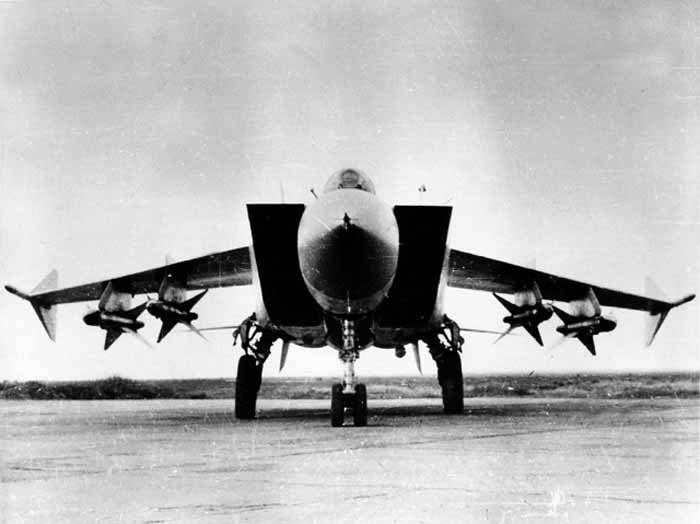 Already in 1967 in Gorky, the first serial interceptors were ready, the E-155P6 fighter became the standard for serial production. All the vehicles, together with fighters of the installation batch, took part in state tests of the C-155 interception complex, which began in December 1965. The first stage of state testing was completed in November 1968, when a preliminary conclusion was issued on the launch into mass production of an interceptor fighter, which was given the official designation MiG-25П. In November of the 1968 of the year, the second stage of state tests began, which was successfully completed in May of the 1970 of the year. Shortly before this, the first serial interceptors arrived at the Air Defense Training Aviation Center, located in Savaslake, and also in the air regiment in Pravdinsk. Military tests of the aircraft were launched here, and from the second half of the 1970 of the year, rearmament of the new type of aircraft and other Soviet air defense regiments began.

The E-155MP interceptor was the first combat aircraft in the world, the basis of which is to be based on a radar with a phased antenna array (PAR) "Zaslon". This radar could provide the fighter with the detection of air targets of various types at a considerable distance over the entire range of flight speeds and altitudes. This includes low-altitude targets that fly against the background of the earth. The use of such a radar made it possible to provide a wide angle of view and to abandon the use of mechanical antenna drives, which had low speed, in addition to this, the problem of attack and tracking of a large number of air targets without limitation on flight angles was solved. 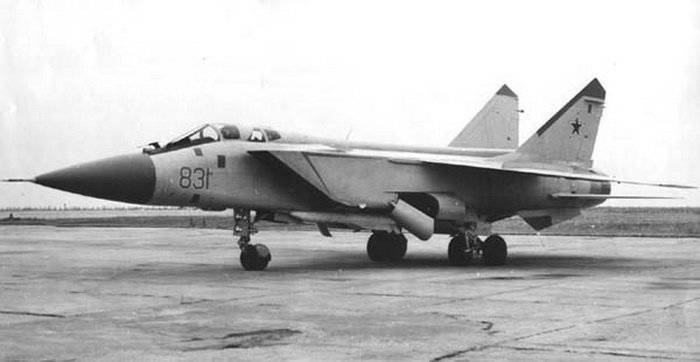 The E-155MP project was completed in 1968. For state tests, the car had to be provided in 4 quarter 1971 of the year. But further research on the project revealed the need to change the scheme of the fighter. With the existing scheme, the practical ceiling and rate of climb were insufficient, and the design of the fighter was weighted. As a result, in 1969, work began on a new scheme, and in 1971, the fighter-interceptor finally approved the scheme with a fixed trapezoidal wing, two-seat cockpit (pilot and operator) and a conformal suspension of the missiles under the fuselage of the fighter. The power plant of the machine was represented by engines D-30F-6. New requirements were made for this aircraft, in particular, the possibility of semi-autonomous combat operations in the absence of a continuous air defense radar field, for example, in the Far East or the far North of the country.

The construction of the first prototype of the E-155MP was completed by the 1975 year at the pilot production plant of the MMP for them. A.I. Mikoyan. The aircraft was equipped with standard engines D-30F-6. Initially, the wing of the MiG-25РБ was installed on the fighter, which was later replaced by the wing with root bursts, hovering ailerons and flaps, deflected socks. The ventral ridges of the fighter-interceptor increased in size by 1,2 m2 (compared to the MiG-25). Wing tanks to the fuel system is not connected. The leaves of the main landing gear played the role of brake plates and were made according to the original two-wheeled carriage scheme.

The flight complex “Flight-1I” was installed on the fighter, as well as the automatic control system - SAU-155UP. Instead of the regular heat finder and radar "Barrier" were installed their weight and size models. In both cockpits there were ejection seats KM-1M. New fighter for the first time flew 16 September 1975 of the year. In the spring of 1976, all the pilots of the MMP for them already flew by plane. A. I. Mikoyan (A. G. Fastovets, B. A. Orlov, V. E. Menitsky, P. M. Ostapenko). The first navigator-operator of the fighter was V. S. Zaitsev. The construction of the second prototype fighter, which received a complete set of onboard equipment, was completed at the beginning of 1976. In the future, it was this machine that served as the prototype for the new Soviet fighter-interceptor MiG-31. 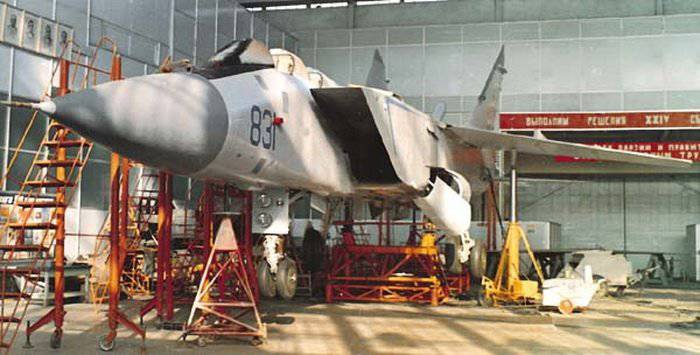 Fighter E-155M was born as a result of the revitalization of the modernization of the MiG-25P. To improve the performance of the interceptor fighter in the 1973, two new R-25BF15-2 engines were mounted on two serial MiG-300 (interceptor and reconnaissance) engines, which gave traction to 13 500 kgf during afterburner. and had reduced fuel consumption. Thanks to this and improved thermal protection, the fighter had a better rate of climb and greater speed. An experimental E-155M fighter with full rocket armament could reach maximum speed in M ​​= 3, versus M = 2,83 or 3000 km / h from the serial interceptor.

In 1975, the fighter received a new horizontal tail and a new wing. In the same year, it had time to replace the avionics and part of the control system. This aircraft was used for various tests up to April 1977. The car was set a number of records, in particular 22 July 1977, E-155M with a load of 2 tons rose to a height of 37 800 meters, and August 21 without a load to a height of 37 650 meters. Thus, the world record was set for the height of the flight of an aircraft equipped with air-jet engines, not beaten to this day.

Tests of the MiG-25, equipped with a new power plant, demonstrated that the characteristics of the aircraft clearly improved, but the P-15BF2-300 engines did not go into series, and work on their further development was stopped. The preference was given to the E-155MP, a two-person interceptor fighter - the prototype of the famous MiG-31, which is still in service with the Russian Air Force and represents a rather formidable weapon.

Performance characteristics of the E-155MP: