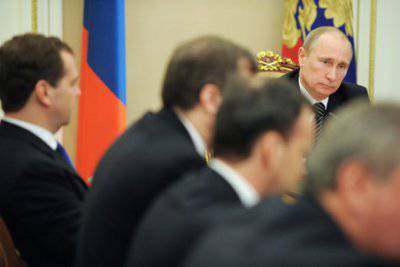 After President Putin’s recent reshuffle in the Russian Government (starting with the resignation of the Minister of Regional Development Oleg Govorun), the idea of ​​a new president’s concept began to take shape.

Even before the arrival of Vladimir Putin for the third presidential term, many expressed the idea that if a candidate Putin wants to win more sympathy from representatives of Russian society, he will have to restructure in some way the attitude to the political system. Such a candidate was even endowed with the specific status of “Putin 2.0”, implying the need for a new state policy, a policy in which any political, let's say, authority can be ruined, if a person occupying that or a public office exceeds his official authority and frankly stands on the path of corruption.

And, apparently, Vladimir Putin, really decided to conduct a kind of manual reconfiguration of the power system in Russia. The fact is that the series of permutations of the last few days and weeks is far from those Yeltsin flaps when the ministers and chairmen of the government eventually changed as pictures with kaleidoscopic bustle and chaos, not bringing a positive result, but sometimes led to even greater imbalance mechanism. Putin is acting more prudently and at the same time works exclusively preventively, isolating from the state mechanism those managers who have shown themselves, to put it mildly, not quite effective.

Putin’s supporters see in the president’s actions a verified component, in which the resignations are held in such a way that they do not destroy the established political system, but lead to its improvement. In this case, Putin can be compared with an experienced surgeon who decides on a rather complicated operation, which may initially even somewhat worsen the condition of the “patient”, but then - in the near future - can lead to an improvement in the body.

Critics of the president see in Putin’s actions an indispensable desire to get rid of “his people”, who have gone too far with the unequivocal, from the point of view of the critics themselves, connivance and sacrifice on the part of the highest authorities of the country. However, if we consider this point of view, it turns out that Putin would be subjected to harsh criticism by the liberal forces anyway. I would have left the ministers in place, whose departments have become too often involved in the implementation of corruption schemes, they would say that Putin continues to boil in his own juice, does not remove rubbish from the hut, and thus covers everyone and everything among the power elite. But Putin did not leave ministers in place. Then, the liberal strata of the population, taking a very short pause and reapplying their brains, found a new excuse for criticism, which was mentioned above: they say, the president wanted to stay clean, and everything like that ... In general, the fork of liberal criticism does exist in order try to gain political points in connection with any decision of the head of state.

However, this time this criticism itself does not stand up to any criticism, because the actions of President Putin prove that the main post in the state is occupied by a person who is able to change himself and adjust the political system in a way that is more effective for the development of the country. Someone talked about political stagnation ... And? ..

Of course, it is not necessary to think that the removal of a couple of ministers from the positions immediately put Russia on the rails of total modernization and lead straight to a brighter future. In the end, this is not the main point of presidential decisions. Their main point is to give a signal to all polls officials that the quality of the performance of their duties depends on how smoothly they will sit in the occupied places. At the same time, Putin’s non-verbal message for the army of officials is not reduced to the frenzied “to execute all, to hang all”. The president uses a more than civilized method: if you don’t cope, we’ll select someone who is ready to cope; you cannot cope and break the law - there is work for the investigating authorities. This is a quite calm signal, but after all, by and large, for our country it is quite akin to revolutionary changes in power. No, the revolution here is not at all the removal of one or another state official from office and the institution in relation to him or his closest subordinate criminal cases; a revolution here means a situation in which the government is not going to flirt with itself, but is ready to go for a completely civilized and timely “cleansing”, as they would say at the time.

Purification on the basis of the current legislation of the lined political ranks, which by a certain moment is maturing and being realized by the highest political authorities, can say that in our country both the government itself and the very civil society that has been spoken about so much in the past. Moreover, under civil society here it is necessary to understand not individual groups of people who in any endeavors of the power political elites certainly see the negative, but rather a substantial layer of Russian society, capable of understanding its own, including responsibility for the fate of the country in which it lives.

So, the president uses the personnel regulation tool on the basis of current laws, the president forms the team that will not only fulfill the duties assigned to it, but also the team that is aware of the level of responsibility before that civil society. For obvious reasons, such a formation cannot be considered complete either yesterday or today. In this case, the 100% completion option is not at all attainable. This is the new approach to building a political system: if one of its mechanisms fails, then it must either be “repaired” or replaced without stopping the overall work process.

Whether this is truly a cardinally new style in Vladimir Putin’s policy will show the further course of events, but at least the beginnings of this style are already visible.