The beginning of the revival of the Russian icebreaking fleet laid 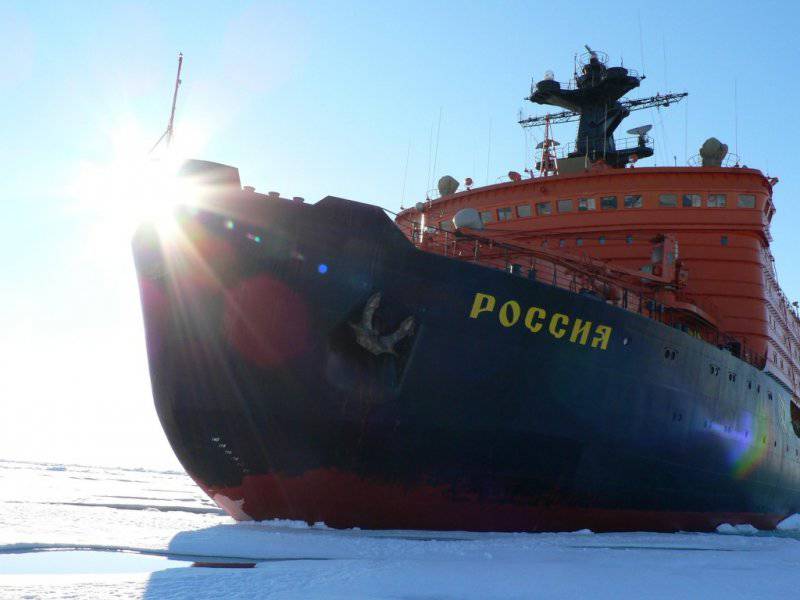 So it's time for the revival of the icebreaker fleet in Russia. First time in stories an independent Russian state at the Baltiysky Zavod in October 2012 of the year saw the laying of the icebreaker LC-25, a large linear diesel-electric ship with a displacement of more than 22 thousand tons and a capacity of 25 MW. Prime Minister of Russia D. Medvedev took part in the ceremony of laying the keel of the icebreaker LK-25.

First of all, it should be noted that the LC-25 is a fully-fledged icebreaker, which is designed to guide ships along the Northern Sea Route, both independently and in group with other icebreakers. It is bipartisan, that is, it can be used not only in high water, but also in river conditions, which is an undoubted advantage over icebreakers that have a large draft. The draft of this icebreaker can vary within eight meters, depending on how full the ballast tanks with water are. Thus, it is quite possible to abandon the icebreakers of small precipitation. Incidentally, the LC-25 is also equipped with a cargo crane having a load capacity of 150 tons, which is designed to perform work under water during the laying of pipelines and in those regions where drilling and mining platforms are installed. In addition, the vessel is planned to be equipped with a special system designed to extinguish fires on oil and gas and drilling platforms. And also on the icebreaker the possibility of placing special equipment to eliminate, if necessary, oil spills.

On the ship, moreover, very comfortable conditions are provided for accommodating passengers and crew, which will make it possible to use the vessel for passenger and expeditionary flights.

On October 17, a week after the launch of the LC-25, a ceremony of laying another icebreaker LC-16 21900М was held at Vyborg Shipyard.

LK-16 is a diesel-electric icebreaker, equipped with a thruster and two steering wheels with full-turning columns, equipped with a helipad. This vessel is a modernized project 21900, according to which the 2 icebreaker, St. Petersburg and Moscow, were built. A number of changes were made to the new project, in particular, there were opportunities for accommodating special personnel and equipment, the helipad was moved to the bow of the vessel, a crane with increased payload was installed, the hull structures were strengthened to reduce vibration, the propulsion complex had more power. In addition, the steering rotors are replaced by Icebreaker7 (previously used by Icebreaker6). Plus, the ship has installed systems and equipment that must ensure compliance with international requirements for ballast treatment and reduction of harmful emissions. The icebreaker has a displacement of about 14 thousand tons. Its main purpose is to independently guide and tow large-tonnage vessels, extinguish fires, assist ships in the event of a disaster, and transport payloads. In total, it is planned to build an icebreaker 3 for this project, which should be put into operation before October 2015. It is assumed that the main place of work of the courts will be the Baltic Sea basin.

It is worth noting that these icebreaker projects are not the only ones. Earlier, in April of this year, the first steel cutting was carried out at the Yantar Baltic Shipyard for the innovative project of the unique icebreaker P-70202. The customer for this project was Rosmorrefflot, with whom a contract was signed in early October of 2011.

The laying ceremony for the icebreaker took place at Yantar plant in July 2012, but since the Russian shipbuilders are working on this project together with the Finns, the construction will be completed at the Finnish company Arctech Helsinki Shipyard Oy (Russian capital in it is 50 percent of shares and is under the jurisdiction of United Shipbuilding Corporation).

This vessel is the only icebreaker in the world that is designed to carry out rescue operations and combat accidents involving oil spills. A characteristic feature of the icebreaker is an asymmetrical body and three windshield columns. Thus, the vessel can work both in the rear and in the forward course, and in addition, lateral movement is also provided, if necessary, for posting vessels in ice conditions. The very idea of ​​a navigable vessel was developed by the Finnish company Aker Arctic Technology back in the 90s of the last century.

The equipment for the icebreaker will be delivered by Transas, which has signed a contract with the Finnish plant Arctech Helsinki Shipyard Oy. Among this equipment will be supplied a set of integrated navigation system and navigation equipment, GMDSS equipment, an optical-electronic night vision and video surveillance system, navigation systems, equipment designed to ensure the landing and take-off of aircraft. In addition, it is supposed to install modern satellite systems that most meet the technical requirements, presented to the vessels of this class.

Thus, the icebreaker will be used to extinguish fires, eliminate emergency oil spills, and will also carry out environmental monitoring.

But that's not all. Soon, as the head of the United Shipbuilding Corporation stated, steel cutting will begin to lay the project for the nuclear icebreaker 22220 LK-60Я. Recall that the nuclear-powered icebreaker, the construction of which was started back in the Soviet years (in 1989 year) - “50 Years of Victory” was completed and put into operation only in 2007 year.

The new icebreaker is a completely new vessel, on the protection of the project of which many organizations worked, in particular, the Krylov Central Research Institute, TsNIIMF, Iceberg Central Design Bureau. Note that at the time when the project existed only on paper, many did not believe that domestic shipbuilders were able to “pull” such a serious project. However, at the beginning of 2012, the successful tests of the new nuclear power plant Rhythm-200 passed, and the icebreaker itself is planned to be laid in 2013. The new vessel will be equipped with new hull lines that will improve its ice resistance and ice carrying capacity.

We also note that the new icebreaker will be the largest of all nuclear icebreakers ever built in the world. Its capacity will reach 60 MW (while Taimyr has a total of 32,5 megawatts, and Arctic one has a little more 29 megawatts). The ship's width will be 32 meters (against 28 meters for the above icebreakers), length - 172 meters (for Taimyr it is 150 meters, and for the Arctic - 148 meters). The ice run will be on the order of 2,9 meters (versus 1,95 and 2,25 meters on two other vessels). In this case, the draft will vary depending on the tasks and conditions, the ballast tanks will be able to receive up to 9 thousand tons of water. Thus, it can be said that the icebreaker LK-60Я is capable of replacing both vessels — the Taimyr and the Arctic — for escorting ships to the northern ports.

It should be noted that the revival of the icebreaking fleet and the construction of new icebreakers, which are necessary for the resuscitation of the Northern Sea Route, are needed not only for the transportation of mineral resources that are mined in the north of the country. There are other reasons besides the increasing importance and role of the Northern Sea Route as an international transport line. In particular, the warming that is currently observed will make the transportation of goods economically viable, and in addition, this sea route that connects Asia and Europe lies in the territorial waters of Russia. And if we take into account that the prospect of turning North Africa and the Middle East into a large continuous zone of instability is increasingly noticeable, the use of icebreakers will be of great importance in terms of transport safety. This is understood in many states, in particular, in Japan, which has developed a joint program with Norway to develop the Northern Sea Route and is already conducting trial pilotage for its vessels.

In Russia, certain measures are also being taken in this direction: a program called “Basics of Russian state policy in the Arctic” is at the implementation stage, new icebreakers, railways and ports are being built, but the Arctic grouping of troops is also being created. And this is right, because the fact that the Arctic is becoming increasingly important requires an increase and its security.