Indian ceiling, Chinese shock and a few lines for "The Power of Siberia" 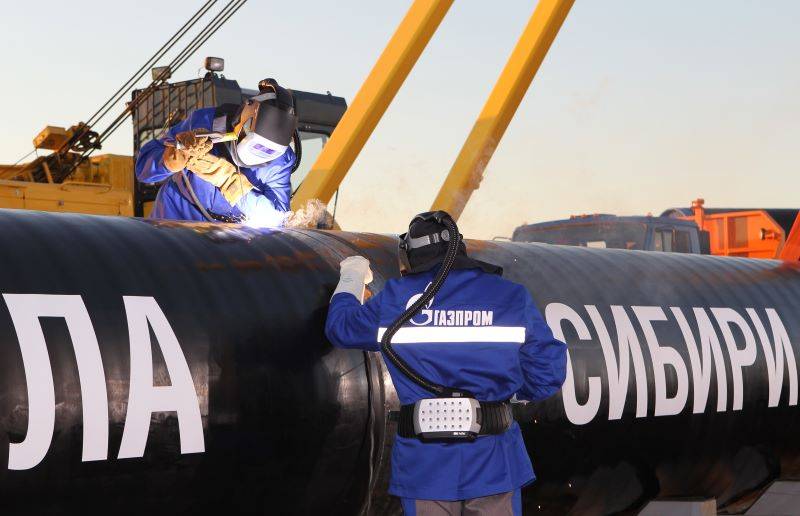 What do they think in New Delhi?

A couple of days ago, I didn’t really stand out in the news flow news from India, where they suddenly decided to forget that they are actually a “friendly” country for us. No embargoes, almost free trade, including weaponsand, finally, large-scale purchases of Russian oil in spite of all the sanctions of the West.

And suddenly - a recognition of the need, more precisely - so far only the opportunity to take part in the notorious "dancing on the ceiling." New Delhi may join the ceiling on oil prices, which was introduced shortly before the New Year by the countries of the European Union and the G7.

In fact, the Indians are quite understandable - who would refuse to get inexpensive raw materials even cheaper. It's no secret that India is now buying a record amount of Russian oil and, one might say, at the lowest possible prices. Currently, according to various estimates, the discount reaches 12-15 dollars per barrel.

On one condition - if the EU imposes sanctions against it or if the price of oil exceeds $60 per barrel. Oil from Russia is bought mainly by private Indian companies, which significantly reduces the severity of the problem - they can use not the most legal channels.

This is how they did it for many years in trade with Iran. However, New Delhi's oil demarche immediately reminded of the difficulties that Russia may face in gas trade as well. After all, as you know, gas prices have traditionally been and formally remain tied to exchange oil prices.

This never suited the Russian gas workers, since depending on the outcome of the permanent oil wars and the will of the sheikhs from OPEC is guaranteed to remain an outsider. For many years, Russian gas companies have been bargaining hard with buyers, primarily from Europe.

The struggle was for setting stable prices for long-term contracts. For some time, a lot has been achieved in this direction. However, in the era of global confrontation, everything went wrong. And we are counting this era not even from the Maidan, but also from the orange and other color revolutions.

Since then, gas buyers from the Old Continent, dictated from across the ocean, have been voicing that Russia has turned oil and gas into political instruments, worse, into weapons. And they sold the exchange prices for themselves. And then they took up arms against both Nord Streams.

As a result, Europe received a thousand and even two thousand dollars for a thousand cubic meters of blue fuel. Fortunately, exchange prices are not everything, but the same Gazprom, thanks to them, has already covered all the losses associated with the problems of Potoki.

In this regard, critical arrows are immediately recalled against the notorious Power of Siberia project and the notorious turn to the East. Which, in fact, is already happening literally before our eyes.

But first, let's compare European gas prices with our domestic and export prices for China. 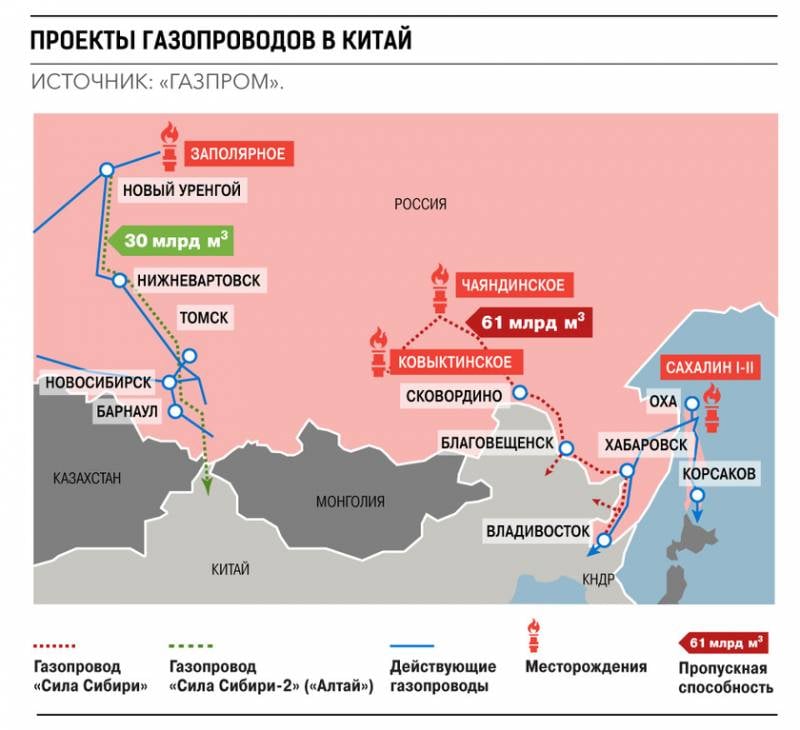 In Europe, quotes are now fluctuating in the range of 800-850 dollars per thousand cubic meters. m. However, for many buyers - for example, in Serbia or Hungary, prices are completely different: twice, and often three times lower, in accordance with old or extended contracts.

At the same time, we must not forget that the Power of Siberia was built with the expectation of buyers from China and Korea, as well as for the widespread gasification of the east of the country. If at some time ago the question was actually raised about the possibility of delivering gas from the same Kovykta field, about which - a little lower, to Europe, then a very long time ago, and it was closed once and for all.

Remembered? This is Lomonosov

Many, oddly enough, even after the large-scale evacuation of industry during the war years, after the BAM and the reconstruction of the Trans-Siberian Railway, after the Vostochny cosmodrome, still do not take seriously the well-known words of the great Russian scientist. The fact that the wealth of our Motherland will grow in Siberia.

However, the Chinese, shamelessly devouring the Russian forest and already aiming at the waters of Lake Baikal, seem to have understood this before many of us. However, this is not about them - although as loyal buyers of our oil and our gas, and you never know what else, the citizens of the PRC are actually quite interesting to us. That's just not buried. And we have much more to offer them.

Under the roar of turret guns, few people even paid attention to another news, no longer from India, although its significance, in fact, is strategic. December 21, 2022 – just three weeks ago, Gazprom put the Kovykta gas condensate field into commercial operation.

At the same time, a section of the Power of Siberia-1 gas pipeline from the Kovykta to the Chayandinskoye field was put into operation. It is not entirely clear why the Kremlin PR people did not even consider it necessary to release through all possible channels the information that Russian President Vladimir Putin had given the command to launch via video conferencing.

Well, NWO is now more important, although what funds, if not to sell gas and oil, will be used to implement it?

But here it is simply necessary to turn back to the past, distant and not very. The notorious Irkutsk gas production center was supposed to appear on the gas map of the USSR back in Soviet times, but then the conditions for this were not the most suitable.

At first, the task of complete gasification of the country, including Siberia and the Far East, then, and then already in Russia, which fell under the privatization rink, was considered too costly. Although the idea of ​​turning the gas monopoly, let us recall, is natural, both Viktor Chernomyrdin and his successor at Gazprom, Rem Vyakhirev, rushed into an almost complete copy of RAO UES.

Secondly, China, with all the growth of its economy, then simply could not buy a lot of gas.

Finally, the third - the need for deep gas processing, as it is now at the Amur plant, raised serious doubts. Due to the insignificant potential demand for associated condensate, as well as helium and a number of other components.

Just a few years ago, they could not have been cheap, but now the prices are justified, and extraction technologies have advanced a lot. In addition, due to growing demand from China, as well as in the domestic market, a very clear prospect of increasing production, transportation, and processing capacities has emerged.

We remind you - Kovykta

In this regard, let us return to the “Power of Siberia” and to the Kovykta gas condensate field, which is the base for it. It was known about it for a long time, since about the 80s it was already planned to be put into action, but it was not very successful to get to Kovykta seriously in Soviet times.

After the collapse of the USSR, Gazprom did something with the license for its development. As a result, after all the miracles of privatization and loans-for-shares auctions, the potential untold wealth of Kovykta ended up in the zone of influence of the TNK company and its partner, the British, and in fact transnational BP. 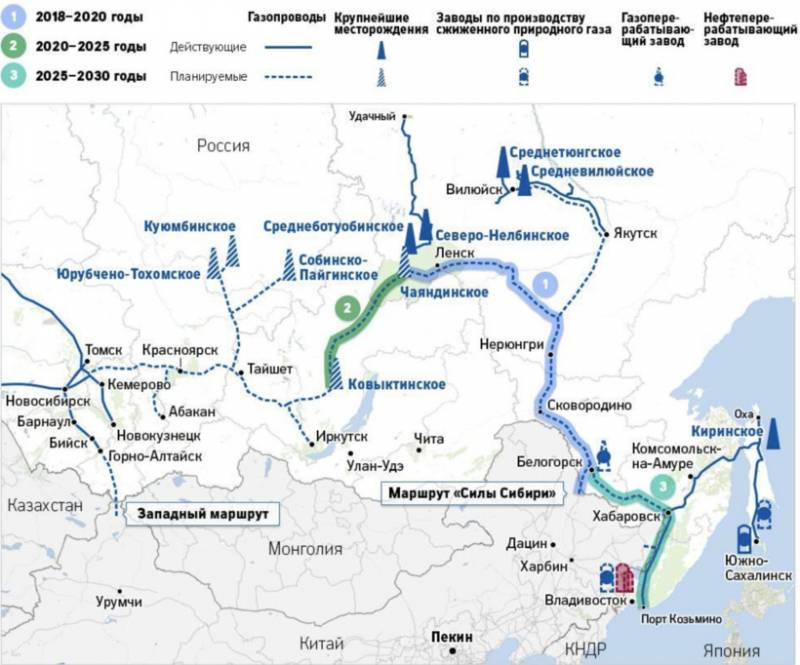 How the field nevertheless came under the control of the Russian gas monopoly is a separate issue. The main thing is that at the moment the design capacity of the Kovykta field, together with the slightly less powerful neighboring Chayandinskoye, is already estimated at more than 50 billion cubic meters. m/year of natural gas.

Recall that the capacity of each of the Nord Streams is 55 billion cubic meters. m/year. And in total, annual gas supplies to Europe from Russia once reached more than 200 billion cubic meters. m.
After these figures, it is impossible not to reinforce the arguments about the benefits of selling gas to China with one more historical argument.

It was really unprofitable to drag the gas pipeline from Kovykta to Europe. In addition, it was impossible not to take into account the European trend for green energy and the long-term “Ukrainian” games with transit. In the end, any business, and commodity in particular, requires diversification, and the seller is usually much more dependent on the buyer.

Do not forget that the "Power of Siberia" was actually built according to Soviet still projects, corrected, of course, to the new standards, although innovations cannot be counted there. In addition, based on the Western market, as, indeed, on any other, it was easier to deal with Yamal, developing the LNG industry there as well, which was done.