November 9, 2012
1
Development of jet-driven weapons class "air-to-air" begins in 1951 year KB-1 (3 GU under the Council of Ministers) in an active manner. According to the decree 1587-590 from 01.04.52, the works receive official status. The rocket guided weapons were created for the MiG-15 / 17 type fighters equipped with 4 data systems, which made the defeat of the chosen aerial target almost guaranteed.

The main design work was carried out by the 32 department of KB-1. The head of the work is D. Tomashevich. The project being developed was called the “CMM product”. Work on the preparation of three MiG-17P aircraft for arming with new guided weapons is carried out in the middle of 1952 at the Gorky OKB-155. After the conversion, the aircraft received the name SP-6. By the end of 1952, two more aircraft were added to them, re-equipped at the Novosibirsk plant number 153.

The first tests of controlled jet aviation shells (rockets) start in 1953. Prototypes of missiles called B-89 are undergoing ground tests (throw). By the end of the summer of 1953, the cycle of throwing and static tests ends simultaneously. Small production of prototypes for the flight test cycle begins. Observation IL-28s are being prepared to monitor tests and adjustments.

08.10.1953, the prototype B-89 / B-140 "CMM Product" was launched from the SP-6 (MiG-17P) aircraft and made a fairly smooth flight. Flight tests began at the Astrakhan range Vladimirovka. The first stage included five launches carried out within two weeks.

Further development of the "CMM Product" is transferred to the OKB-2. Some specialists have moved to work under the direction of the general designer P.Grushin. This did not affect the pace of work, and in 1954, the flight tests of the prototypes continue. During the 1954 year, based on the results of the launches, work is being done to eliminate the deficiencies and update the motor system. By this time, the X-NUMX launches of the “B-30” were made. 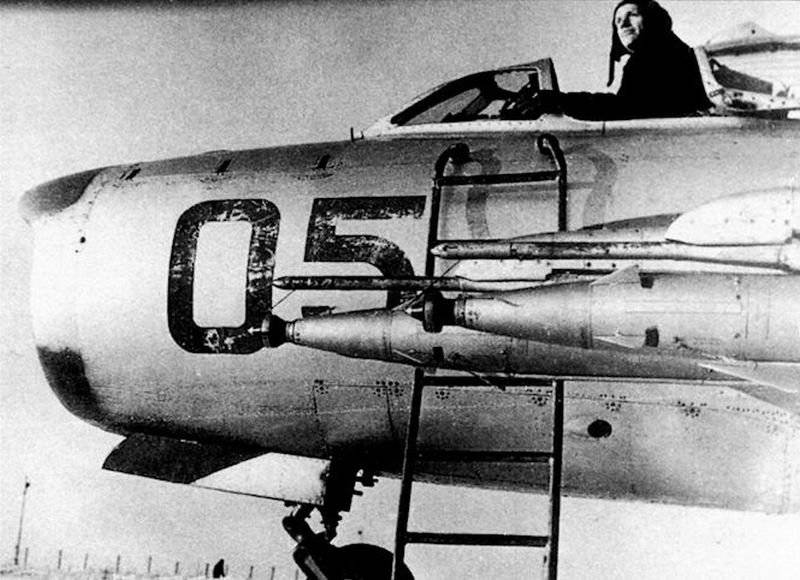 In August, the 1954 of the year begins the launch of URS on aerial targets. First, the “201 product” was used as a target, which was specifically built as an unmanned target for these tests. However, due to the small EPR of the target, its capture occurred at a reduced estimated range, and the launch of the rocket itself took place at a distance of less than one kilometer. The following launches, which began in the 1955 year, were carried out on the accuracy of the radio fuse.

The main “combat” trials begin in the spring of 1955. 08.03.1955 of the year recorded the first successful defeat of a target aircraft missile (Tu-4). At 1956, the year after all tests, including state tests, more than 70 missile launches were conducted.

Gorky Aviation Plant No. 21 specifically for the development of new weapons produces a small batch of interceptor aircraft SP-15 (MiG-17PFU) in the number of 40 machines. On these planes in 1956, military tests of missiles were carried out, after which they were put into service under the name RS-1U. 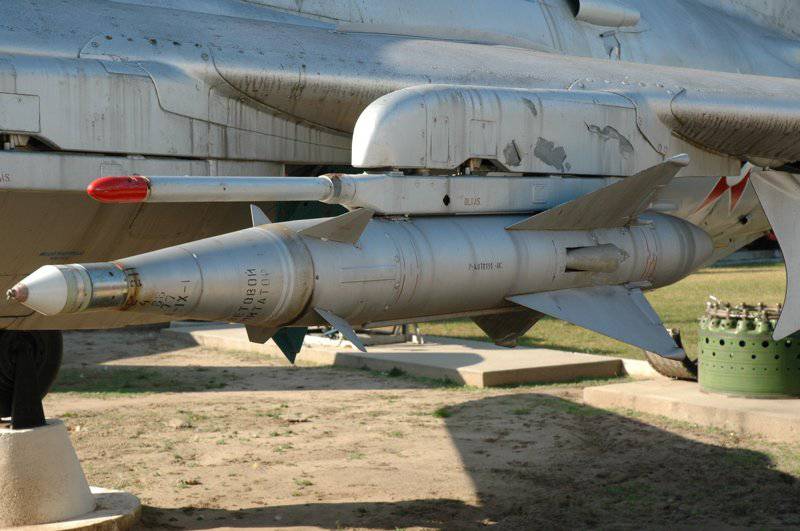 The C-1-U weapons system begins to be supplied for air defense aviation. In addition to the MiG-17PFU, the system is installed on board the Yak-25K interceptor aircraft. Unlike the Mig-17PFU, four launchers with missiles were installed on board the Yak-25K. Initially, the issue of missiles was engaged near Moscow plant number 455. Later he was joined by four more PC-1U production plants.

Device and construction
APU-3 - launcher installed under the wing of the interceptor aircraft. To mount the rocket had locks-holders 369-W. To fix the turbo-generator cable in the nose, a long bar is made. APU-3 produced at the Kiev plant number XXUMX.

The C-1U armament system has received an Emerald-1 radar sight based on the RP-2U radar sight. It was developed by NII-177. It is a development of the Emerald radar for the MiG-1952 / 15 adopted in 17. The radar has two antenna units — a parabolic antenna unit is made in the middle of the air intake, tracking the target, and a parabolic antenna unit is made above the air intake that detects the target and consists of two antennas directed in opposite directions.

Radio control was carried out on 2 separate channels. The onboard radio control equipment provided signal processing and data output for the rocket movement in two planes. The data also came on a three-channel autopilot. He controlled and stabilized the flight of the rocket.

Guidance missiles occurred on the beam of the onboard radar. The pilot was required to capture the radar target to hold it at the center point of the radar indicator, after which the radio target was transferred to the automatic tracking mode. When reaching the firing range, the pilot launched a rocket or rockets. After the launch of the missiles, the pilot continued to hold the target on the radar indicator. At the same time, the onboard guidance equipment for the missiles received data from the Emerald-2 radio array, which worked on a constant conical scan. If the missile was off the "course", then the signal from the radar changed by the amount of deviation, thereby returning the missile to the equisignal zone. If the rocket did not hit the target for some reason, then after a certain time, set to the timer, self-destruction occurred.

PC-1U
A shell (rocket) was created using an aerodynamic “duck” with a cruciform wing and rudders. The wing has a shape close to triangular. To stabilize the flight and control the movement "along the line" the wing is provided with ailerons. This design and the shape of the wing were developed at TsAGI by the group of P. Krasilshchikov. The PC-1U case of magnesium and aluminum alloys is divided into five compartments. Compound compartments - threaded, screw. 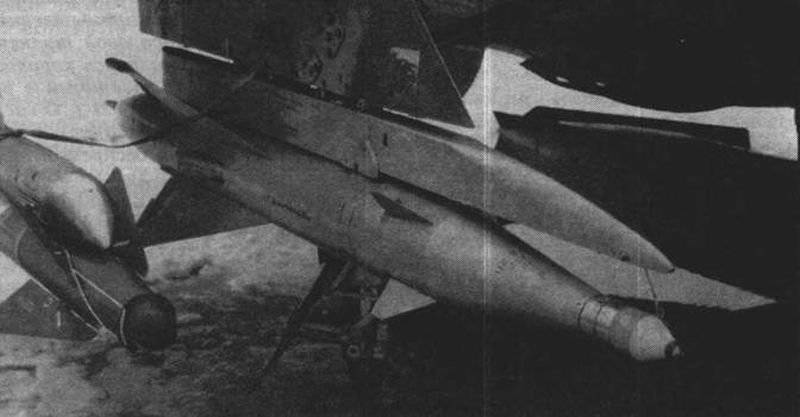 The steel solid propellant motor is mounted in the middle of the rocket. Additionally, this placement provided consistent alignment as the fuel burned out. Warhead frag type. Non-contact radar fuse received a ring antenna. AP-10 is powered by an air flow turbogenerator. When launching the rocket, the cable broke the protection from the turbogenerator openings, and due to the oncoming air flow, power was supplied to the radio fuse. In the Soviet Union, the rocket was produced in a fairly large volume. Delivered to friendly countries, which also was in service. Discontinued in 1970 year.

Variants of execution:
- K-5 - the design name of the project;
- The CMM product is the first name of a guided jet weapon. Designed in KB-1;
- B-89 - the first prototype of the rocket, designed to conduct a complex ground test;
- B-140 - the second prototype of the rocket, created for the flight test complex. There was no onboard guidance system;
- PC-1U - adopted “first self-guided missile projectile”. The aircraft weapons system with this missile is also called K-5;
- “Product 210” - the encrypted name of the serial PC-1U;
- “Product M” - serial name PC-1U;
- K-5C - PC-1U modification project. The main difference is the increased warhead. For a number of reasons, it did not go into mass production;
- PC-2U - modification of PC-1U. The aircraft weapons system with this missile is also called K-5M. At the beginning of 1956, the tests of the modified rocket begin. Adopted at the end of the year 1957;
- Р-55 (К-55) - the modified X-NUMX product from the PC-2U. It is distinguished by the installation of thermal seeker with improved noise immunity and additional warhead. The main developer - OKB "Star";
- PC-2US - modification of PC-2U for the Su-9-51 aviation complex (К-51 / К-5MS). Adopted 10.10.1960 year;
-PL-1 - licensed rocket RS-2U, produced in China;
- target rocket - Polish air target development, made of RS-2U rocket for anti-aircraft calculations; 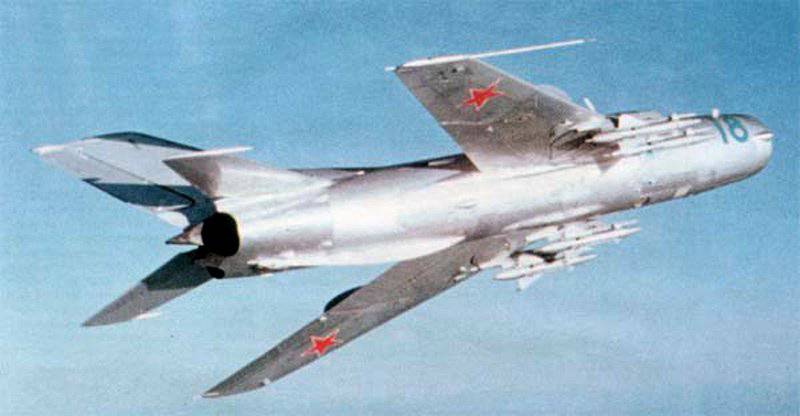 Aircraft carriers:
- SP-6 - MiG-17P - test aircraft, specially rebuilt for the flight tests of the PC-1U. Created by - 5 aircraft;
- SP-15 - MiG-17PFU (MiG-17P-FU) - carrier aircraft, fighter-interceptor, to equip the new weapon system C-1U. Released a small series in 40 machines. They were part of the country's air defense forces;
- The Yak-25K is an interceptor fighter, also equipped with the new C-1U weapon system. Produced in series. Armed with 4 PC-1U missiles. It was in service with only one aircraft unit;
-CM-7А (СМ-2М) - MiG-19 or MiG-19ПМ - carrier aircraft (product 65) for an advanced rocket. Notable for the presence of an optical sight. PC-1U did not become a carrier. It was proposed as a carrier aircraft for the next modification of the PC-2U rocket. Built order 390 machines;
- Su-9 interceptor aircraft, under which developed the new complex Su-9-51 with the RS-2US missile.
- T-3 - is a prototype of the Su-9. Converted T-3 to install the new K-51 complex - T-43-2. Created by 4 test aircraft. Installed starting APU-19 and APU-20 of two units;
- MiG-21PF / MiG-21С - the last carriers of the K-5 series of missiles - K-5MS.

Further development
In KB-1, the complex was upgraded. A new airborne radar CS-30 is being created. The complex, called K-51, is planning to equip the Su-9 interceptor aircraft being developed. Under this complex in OKB-2 rework serial PC-1U. 10.10.1960, the resolution of the Council of Ministers No. 1108-460 is issued - the new aviation complex is called Su-9-51 (K-5MS), the modified rocket is called PC-2US.

In parallel, there was a development of a new launcher. In 1956, the plant is charged with the production of new APU-4 for Yak-25K, MiG-17 aircraft carriers. They are already made universal - in addition to the K-5 weapons systems and modifications, it is possible to suspend NAR class missiles. Subsequently, the launch of the APU-19 / 20, which were installed on the prototype Su-9, serial Su-9, MiG-19 / 21, were developed.