November 9, 2012
20
The Mi-30 is a Soviet multi-purpose convertiplane project, the development of which began in the 1972 year at the MVP them. M. L. Mil, the project manager was M. N. Tishchenko. Inside the design bureau, this design scheme had its own designation “vintplane”. The main task in creating the Mi-30 was to provide parameters such as range and flight speed that would surpass the performance of helicopters of a similar class. The convertible Mi-30 was considered by the creators as a promising replacement for the multi-purpose Mi-8 helicopter. In the original project, the Mi-30 was designed to carry 2 tons of cargo and 19 passengers, but later the payload of the car was increased to 3-5 tons, and the passenger capacity was increased to 32 people.

In order to understand what is really being discussed, let us examine what constitutes a convertiplane. A convertoplane is an aircraft with turning screws. During take-off and during landing, the screws work as lifting, and during horizontal flight they act as pulling ones (in this case, lifting force is provided with an aircraft-type wing). The design of the convertoplane is inherently close enough to a vertical take-off and landing aircraft, but most often they are attributed to rotary-wing aircraft due to the large diameter of the propellers (comparable to the wingspan) and their design features. The large screws possessed by tweeters allow them to take off and land vertically. But in horizontal flight, they are less efficient than traditional propellers of smaller diameter.

Most often, the pivots are not the screws themselves, but the nacelles with engines and propellers (as in the American Bell V-22 Osprey), but you can also find structures that only have screws rotate and the engines remain fixed (for example, they are located in the fuselage) . An example of an aircraft of this kind, in which only the screws turn, can be called Bell XV-3. Currently, the most well-known operated tiltrotor is the American military tiltrotor V-22 Osprey, whose flight mass is 27,4 tons, and the flight speed in aircraft mode is 463 km / h, in helicopter mode it is significantly lower - 185 km / h. This tiltrotor is able to transfer landing troops to 24 or take on board about 5 tons of cargo. 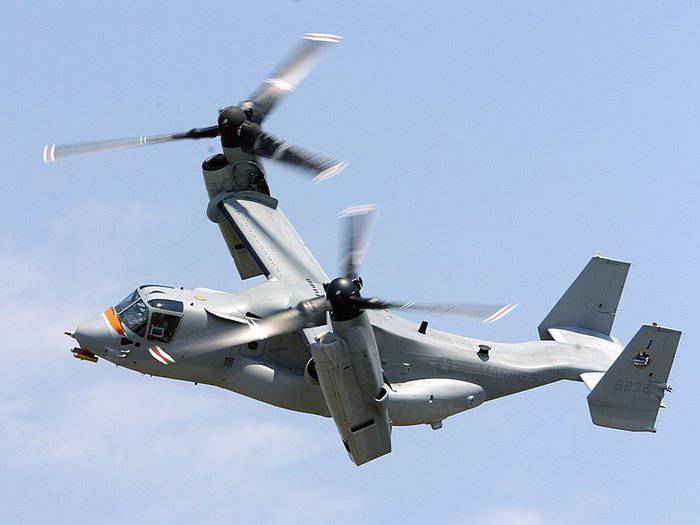 The most famous existing convertiplane V-22 Osprey
The idea of ​​building a rotary-wing aircraft - convertiplane came to the largest aircraft manufacturers in the world in the second half of the 40-s of the last century. This attractive idea implied a combination of a helicopter and an airplane. Designers of many countries struggled to create a machine that could take a vertical take-off and landing with the help of rotors, like a helicopter, and in horizontal flight behave like an ordinary plane, thanks to the wing and aerodynamic control surfaces. To implement this idea, a large number of experimental models were built.

However, unfortunately, most of them turned out to be either significantly inferior in terms of technical and economic indicators, or unworkable. By the beginning of the 70s of the 20th century, a promising from a practical point of view, a concept that belonged to the US helicopter engineering company Bell, had begun to emerge. The company created helicopters of the twin-screw transverse scheme, the axles of the rotors of which, during the transition to horizontal flight, could turn forward, while the rotors became aircraft pulling screws. The use of relatively lightly loaded helicopter screws not only ensured safety during an emergency landing in autorotation mode (during a power plant failure during take-off or in the process of hovering), but also provided the car with great energy advantages in comparison with other types of converters.

At the same time, the Soviet designers, really appreciating a large number of difficulties associated with the development of the transformed apparatus, for quite a long time were skeptical of various “doubtful” projects. But the concept that was proposed by Bell seemed convincing to them. The great experience that Mil has had in developing cross-section helicopters and solving a variety of related problems of dynamics and aeroelasticity of the structure allowed engineers to hope for success in developing a convertible rotor aircraft at the cost center, which would have turning axes of rotors. 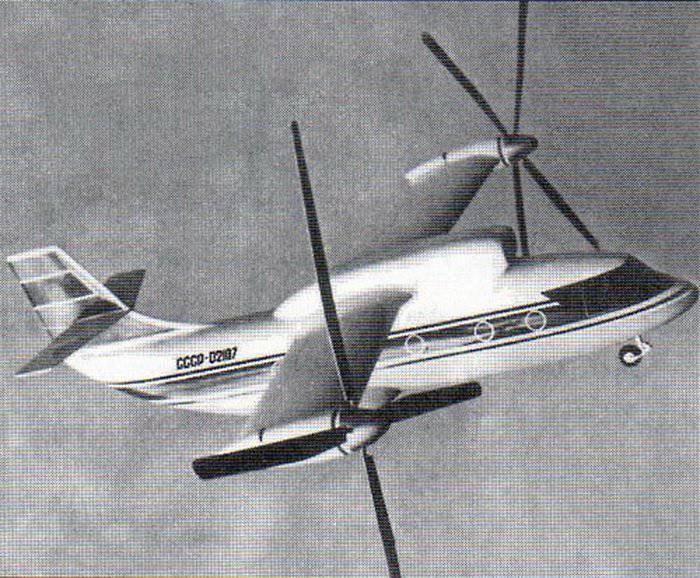 Convertible Mi-30 in horizontal flight
In 1972, the designers of the MVZ them. M. L. Mila, on his own initiative, created a draft proposal for a transport-passenger convertoplan called MI-30. According to the terminology available in the USSR, it was originally called a helicopter-plane, but later Milevtsy invented it with its own designation, the vintroplan. The main task in the design of the Mi-30 was to ensure the flight and technical parameters, primarily the range and speed of flight. Initially, he was supposed to transport up to 2 tons of cargo and 19 landing troops.

As a power plant for the new machine, it was planned to use the 2-3 117 engine, located above the cargo compartment, the engines had to be powered by an 2 transmission with a single-propeller screw having a diameter of 11 meters each. The screws were located at the ends of the wing consoles. The estimated flight speed of the Mi-30 was estimated at 500-600 km / h, and the range should have been 800 km. The take-off weight of the machine is 10,6 t. The Millevians were able to connect TsAGI to the research within the framework of this program. Soon, jointly, the construction of an aerodynamic test bench was started to test the propeller model. At the same time, the designers of the Mil Design Bureau created an experimental flying radio-controlled model of the vintoplane, in order to study in flight the transitional regimes, controllability and stability of the vehicle.

In the process of development, the customer wanted to increase the capacity of the Mi-30 to 3-5 tons, and bring the passenger capacity to 32 people. As a result of this, the design of the vintroplan was redesigned for the use of 3's forced TV3-117F engines. At the same time, the diameter of supporting screws grew to 12,5 m., And the take-off mass of the Mi-30 to 15,5 t. By the beginning of the 1980-s, designers and scientists from the cost centers managed to work out a number of possible schemes, arrangements and designs of the machine’s aggregates, conducted thorough analytical studies problems of structural dynamics, aero-elasticity, flight dynamics and aerodynamics, characteristic of convertible vehicles.

Taking into account the depth of the project, the many years of experience in solving difficult tasks, the Commission on Weapons of the USSR Council of Ministers Ministerial Council in August 1981 issued a resolution on the creation of a Mi-30 helicopter with a transformed carrier system (screw plan). The created technical proposal was submitted for consideration by the customer and MAP institutes. The military approved the creation of the machine, but they demanded that the D-2 engine 136 be put on the vintoplan, the calculated tiltrotor weight increased to 30 t. 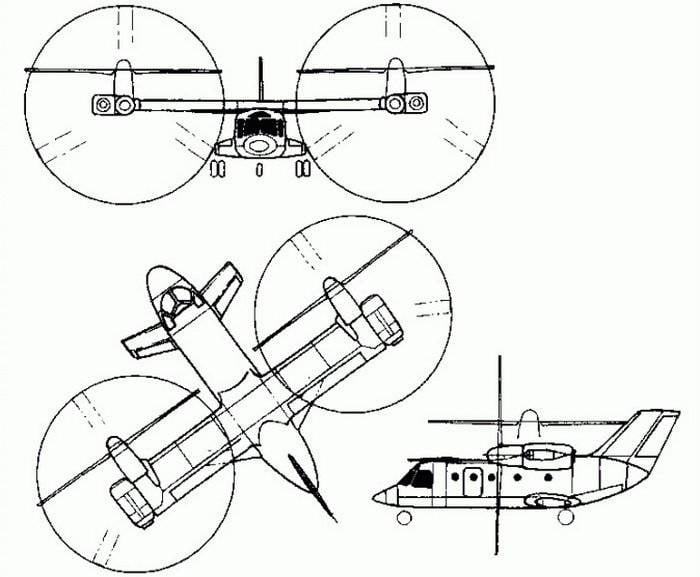 Scheme of the convertiplane MI-30С
In subsequent years, the development of the type of used power plant changed several times. Options with 2 and 3 TV7-117 engines or with two D-27 engines were considered. At the same time, the take-off mass of the Mi-30 was equal to 11, 20 and 30, respectively. At the initial stage, fundamental theoretical studies were carried out in the field of aerodynamics and dynamics, strength field, including calculations of some types of instability, natural oscillations of the apparatus, balancing characteristics, self-oscillations of the “air resonance” type, vertical autorotation modes, “flutter gondolas”, “chord flutter” " etc. The transport efficiency of the vintoplan, the mass of the carrier system were determined, the parameters of the propeller, tail and wing, the efficiency of the propeller, the parameters of the propeller blade and the voltage in it were selected. Developed a variety of options for the design of screws, transmissions, wings and other units.

As a result, the creation of Mi-30 was included in the state armament program for 1986-1995 years. Unfortunately, in connection with the collapse of the USSR and the economic difficulties that have arisen, the Mi-30 screw-glider did not get out of the stage of analytical and design research. In the last year of the USSR, the OKB specialists designed the 3 of various screwplanes: Mi-30С, Mi-30Д and Mi-30Л, which had a payload of 3,2, 2,5 and 0,95 tons, respectively, and passenger capacity in 21, 11 and 7 people. The first 2 converters had the maximum take-off mass in the 13, t. They were planned to be equipped with power units from 2-x TV7-117 engines, and the third Mi-30Л (3,75 tons) with a power unit from 2-X AL-34. Work was done on the creation of combat options.

At the beginning of 1990-i studied the possibility of the participation of the cost center them. M. L. Mil in European projects and programs, including Evrofar and Eureka, which were aimed at creating convertiplanes similar to the Mi-30. But at that time in Russia there were no conditions for organizing such joint projects.