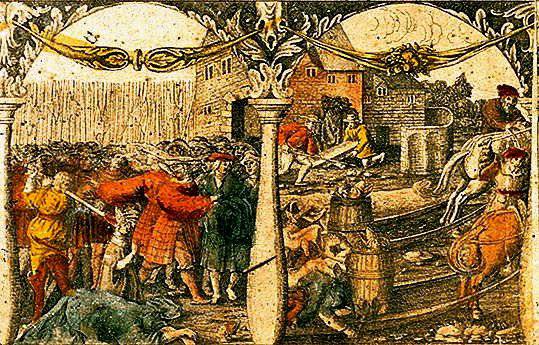 8 — 10 on November 1520 of the year in Stockholm on the orders of the Danish king Christian II took place a mass execution, which entered into history as the Stockholm Bloodbath. This event is considered the most tragic page in the history of Sweden. On trumped-up charges of heresy, a ruling of the ecclesiastical court was issued, according to which about a hundred distinguished people and famous citizens of Stockholm were executed.


It all started with the fact that the interests of the influential archbishop Gustav Troll collided with the interests of the regent of Sweden Wall Sture Junior (reigned from 23 July 1512). The Regent wanted to deprive the Archbishop of the grounds and the castle at Stack. A real internecine war began, Sture arrested Father Troll, and when the archbishop hid in Stack, the castle was besieged by the troops. The archbishop betrayed the besieging anathema, and the Danish king moved his troops to help him. However, Sten Sture dropped Danish troops from Stockholm.

In fact, it was a war between supporters of Denmark and its opponents. It should be noted that since the time of the Kalmar Union, when in 1389, an agreement was signed at Kalmar Castle to create a union of Denmark, Sweden and Norway, there was a certain hostility between the two kingdoms. Under this treaty, the three kingdoms were to have a single monarch, power was to be transferred in a straight male line; in the case of the childlessness of the king, the representatives of all three states were to elect a new monarch. The kingdoms entered into a military alliance and pledged to assist each other in the event of war or insurrection. Reserved privileges of the church. At the same time, the internal autonomy of the kingdoms and their internal laws remained. In the union there was a struggle for supremacy between Denmark and Sweden (Norway was in economic dependence on Denmark). The church took the side of the Danish crown, and Sture sought to put it under control, so he struck a blow at the basis of the power of the spiritual feudal lords - the land holdings.

In Stockholm, after the defeat of the Danes, a meeting of the Riksdag was held. He was attended by the Archbishop, protected by a security certificate. In fact, this meeting turned into a trial of Troll. The Riksdag issued a decision in which Gustavu Troll was denied the rights of the archbishop in Sweden, Stack, as the “cause of great evil”, was proposed to be destroyed and destroyed so that he would not be a stronghold for traitors, foreigners and Danes.

The siege of the castle was continued. The stack was eventually taken and destroyed. The archbishop was beaten and imprisoned. Many supporters were beheaded and wheeled. Church property abolished. Danish king Christian II. Danish in 1518, the second time he tried to restore the union, but was defeated. Talks on a truce began between the Danes and the Swedes. However, the Danish king broke them - he took six Swedish noblemen negotiators as hostages and took them to Denmark. The war was continued with the same strength and cruelty. King Christian has equipped a new army for a campaign in Sweden. He was supported by the Pope, who announced the bull about excommunication of Sweden from the church for actions against Archbishop Gustav Troll. To fulfill the will of the papal throne was entrusted to the Danish monarch. In addition, the actions of the Danes and supported the powerful trading house Fuggerov: he seized in his hands almost all the production and sale of copper in Europe, and had views and mining in Sweden.

A large army at the time, reinforced by mercenary detachments from Germany, France and Scotland, crossed the border of the southwestern province of Hallandi in 1520 and invaded Westergötland. On the Lake Osund, the invaders were met by the army of Wall Sture, which consisted not only of royal soldiers and nobles, but also peasant militias. There was a battle on the ice of the lake. The Swedish army was defeated and retreated to the north. Sten Sture was seriously wounded by a cannonball at the very beginning of the battle. Swedish troops suffered another defeat in the Tiveda forests and the invaders paved the way in the region of Middle Sweden. Sten Sure died two days after the battle in the Tiveda forests, while crossing Lake Melarn on the way to Stockholm. 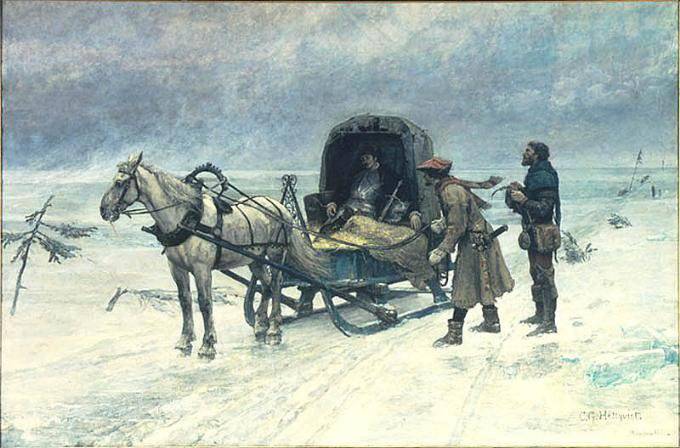 The situation for Sweden was extremely difficult. The peasants lost their leader. No one could immediately replace Wall Sture. The nobility and the church went on the way of finding a compromise with the Danes. The Danish command entered into negotiations with the liberated Gustav Troll. A truce was concluded between Sweden and Denmark. The Swedish State Council recognized Christian king of Sweden. Representatives of the Danish king promised mercy to the defeated and the preservation of constitutional rule, which will preserve autonomy for Sweden.

At this time there was an uprising. The widow Stena Sture, Kristina Yllensherna and her supporters organized resistance and turned to Poland and Danzig for help. However, the uprising was crushed. Stockholm was surrounded by land and sea and surrendered in September. 4 November Gustav Trolle crowned Christian in the Stockholm Cathedral. At the same time, promises of universal amnesty were repeated.

However, the archbishop and his supporters were eager for revenge. They wanted reprisals against Sture. They managed to attract the Danish king to their side, promising him that the legal norms would not be violated. The actions directed against the archbishop and his supporters were declared heresy, their opponents were called heretics, which are not subject to the king's promises. 7 in November in the Stockholm Castle in the presence of the king, members of the State Council and other high officials read the complaint of the Archbishop, in which Wall's actions were viewed as heresy and were asked to act fairly with heretics. The next day, an interrogation was held at the church court, which was headed by Archbishop Gustav Troll. Soon the sentence was pronounced, it was established that the defendants refused to acknowledge their excommunication from the church and vowed that the archbishop would never again receive his church and freedom. The defendants were declared in heresy. Executed 82 man. The widow of Sture, Christian, the Danish king declared "dead in life," she was put in prison.

All secular and ecclesiastical persons who belonged to the Wall Sture party were executed. Their property was confiscated in favor of the king. The bodies of the dead were burned. They even ordered to dig the body of the deceased Wall Sture and burn it.

The Stockholm Bloodbath and the subsequent repressions against supporters of Wall Sture caused not the result that the Danish king wanted (the creation of the great Scandinavian empire). He led the Swedes to general hatred for the invaders and a large-scale uprising led by Christina's relative Gustav Eriksson Vaza. He was taken as a prisoner to Denmark in the 1518 year, in the 1519 year he fled to Lübeck, where he found protection and shelter. During the Stockholm massacre, his father and son-in-law were killed, and his mother and sister were taken to Denmark. Vaza was energetic, possessed the art of a good speaker and a beautiful appearance, hated the Danish invaders, this attracted many people to his side who needed a leader. He was supported by the Swedish nobles, peasants and miners, the Hanseatic city of Lübeck. The Danes, with their terror, exorbitant taxes, enslavement of the Swedish peasantry, led to the unification of the private nobility, peasants and miners against Danish domination and the Catholic Church. Gustav Wazu was elected king of Sweden, and in 1523, he freed Stockholm. Kalmar union has ceased to exist. Gustav Waza reformed in Sweden.