The end of the French Revolution 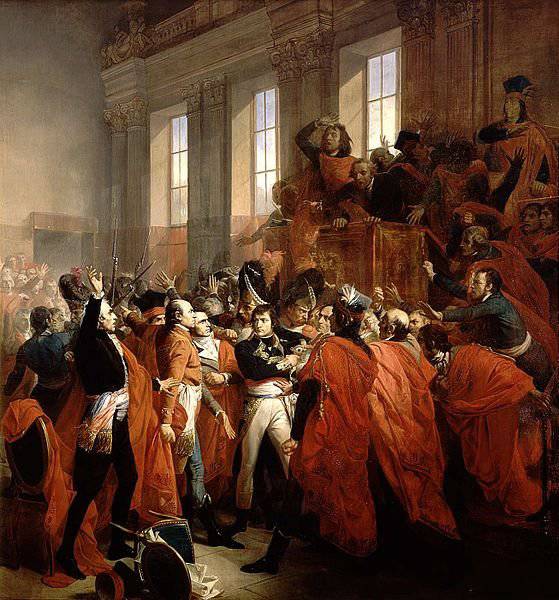 18-19 Brumaire VIII of the Republic (9-10 in November 1799) in France, a coup d'état took place, as a result of which the Directory was deprived of power, and a new provisional government was established, headed by three consuls, Napoleon, Roger Ducos and Syies. This event is considered the end of the Great French Revolution (1789 - 1799).

Early in the morning, 18 Brumaire (9 November), senior officers of the French armed forces began to flock to the mansion on Chantarin street (the house of Napoleon Bonaparte). Among them were commanders, whose names were known by all of France: Moreau, MacDonald, Bernadotte, Lefevre, and others. Almost simultaneously, the Council of Elders (French upper house of the legislative assembly) chaired by Lemercier was assembled in Tuliri. The council was gathered under the influence of rumors about a supposedly prepared Jacobin plot, dismissed by the leader of the moderate-republican party, director Sieyes. He developed his own project of government and entered into an alliance with Napoleon.

At the Council meeting, MP Cornet spoke about the "terrible conspiracy of the Jacobins", then Rainier proposed to adopt a decree on transferring the legislative corps to Saint-Cloud and to appoint General Bonaparte, popular in society, as commander of the garrison of Paris and the district. Bonaparte received the right to take all the measures that are necessary for the security of the republic, all citizens were instructed to assist him at the first request on his part. The Council of Elders was to appeal to the people with a special manifesto in which the decreed measures were justified by the need to pacify people seeking tyranny and thus ensure internal peace in France. The deputies in the conspiracy were taken by surprise and did not object. Rainier’s proposals were unanimously accepted.

At 8 in the morning, a carriage arrived at Napoleon’s house, and the Council’s official representatives solemnly presented the general with high authority. To the assembled senior officers, it was announced that Bonaparte was taking supreme command. Bonaparte, with his brilliant retinue, arrived at the Tuileries Palace, where the generals were awaited by regiments in advance. Everything went smoothly and easily. It was not possible only to bring to the conspiracy most of the members of the Directory. The Goyère President of the Directory was quick-witted and did not come to Napoleon, hurrying to Moulin, and then with him to Barras (he was an accomplice to the conspiracy, but in the end turned out to be among the losers).

In the palace, Napoleon Bonaparte made a short speech before the Council. He emphasized his loyalty to republican principles. Two directors - Siyes and Roger-Ducos, by preliminary agreement, resigned and openly supported the movement. Barras, being without support and abandoned by everyone, making sure that the game was lost, without objection signed the text of the letter of resignation prepared in advance and brought by Talleyrand. The remaining two directors, Goya and Moulin, were taken into custody and also resigned. As a result, the executive branch that existed at that time was destroyed. Directory ceased to exist. Bonaparte ordered his loyal generals to occupy all the important objects of the capital: Lannes was entrusted with the Tuileries, Murat - the Bourbon Palace, Marmont - Versailles, etc.

The Council of Elders and the Council of Five Hundreds (the lower house of the French Legislative Assembly) were to meet in Saint-Cloud for the Brumaire 19. At 12 hours of the day, both chambers of the Legislative Assembly gathered in Saint-Cloud, the Council of Elders - in one of the halls of the palace, and the council of five hundred - in the greenhouse. During the day that has passed since the beginning of the events, the deputies "sobered up" and started asking questions. Why is the directory dissolved? What kind of conspiracy are we talking about? Why did Napoleon have such high powers? In each of the councils there were many participants in the conspiracy. Thus, the Council of Five hundred led Lusen Bonaparte. But they could not take the leadership in their own hands and complete the coup. On the contrary, determination was growing among the deputies, especially in the Council of 500, where the Jacobins prevailed, to change the course of events. They proposed to renew the universal oath of allegiance to the III year constitution.

Bonaparte, Sieyès and their entourage at that time were located in the spacious rooms of the first floor of the palace in Saint-Cloud, awaiting the victorious news. However, the messages were disappointing. The deputies were in no hurry to form a new government and expressed doubts about the need and even the legality of the emergency decisions taken yesterday. Events suddenly began to take a dangerous shade. General Augereau even advised Bonaparte to resign as soon as possible. In the event of defeat Bonaparte and his supporters threatened the death penalty.

Bonaparte, having lost patience, and passed into the meeting room of the Council of Elders. He was given the floor, and he gave a long speech in which he repeated that he was not a dictator, not Caesar, and not Cromwell, that he served only the Republic. Bonaparte was interrupted and demanded precise information about the conspiracy, evidence, and names. Napoleon went away from direct answers, only called Barras and Moulin as the instigators. This only strengthened the doubts of the deputies. Having achieved nothing, the general left the meeting room and entered the hall where the Council of Five Hundred was sitting. Here he was met much worse. The deputies shouted: “Down with the dictator!”, “Beyond his law!” And so on. Napoleon was surrounded by an angry mob, confused, pushed, torn clothes, and in fact was saved by General Lefevre, who with a cry: “Save our general! ", Ordered the grenadiers to bring Napoleon out of the hall.

Murat, who retained full presence of spirit, offered to act harshly, like a soldier. Napoleon doubted he could not decide anything. For some time he was in a state of confusion. The ranks of his supporters quickly thinned. The defeat was close.

By evening, which had become critical, Napoleon returned to his usual vigor. Together with Murat and Lucien, he began to go around the troops and shouted that they wanted to kill him, that conspirators had gathered in the Council of Five Hundred. The soldiers greeted him sympathetically and Bonaparte signaled to Murat. A squad of grenadiers with a drumbeat under the command of Murat and Leclerc moved into the conference room of the Council of Five Hundred. Opening the door, Murat shouted: “Throw all this pack out!” There were no heroes among the deputies, they did not resist, and the hall was quickly cleared.

The coup was completed - the legislative assembly (Council of Elders and Council of Five Hundred) were deleted from stories. The soldiers drove a part of the deputies back into the hall, and they dictated to the decision to create a temporary consular commission consisting of Bonaparte, Siyes and Roger Ducos and two commissions entrusted with the task of drafting constitutional laws. Announcements made by the Minister of Police Fouche, which informed the citizens about important events, pasted on the walls of buildings. The announcements to the Parisians reported that General Bonaparte exposed the counter-revolutionary conspiracy in the Council of Five Hundred, that an attempt was made on him, but the General was saved and the legislative body took all measures to assert "triumph and glory of the Republic."

The Brumerer's 18-19 coup did not meet any resistance, neither power, nor political forces, nor people. Napoleon Bonaparte actually just took power into his own hands. The “last Jacobins” were disappointed with the policies of the Directory and did not intend to defend the murderers of Robespierre and Babeuf, corrupt officials and speculators who profited from the needs of the people. They did not want to fight for such power. They just went to the side, maintaining neutrality. A small part even supported the supporters of Napoleon. The people also remained "silent spectators." Directory mode completely rotted and collapsed naturally, without practically any resistance. Some directors themselves took part in the coup, hoping to extract benefits from it.