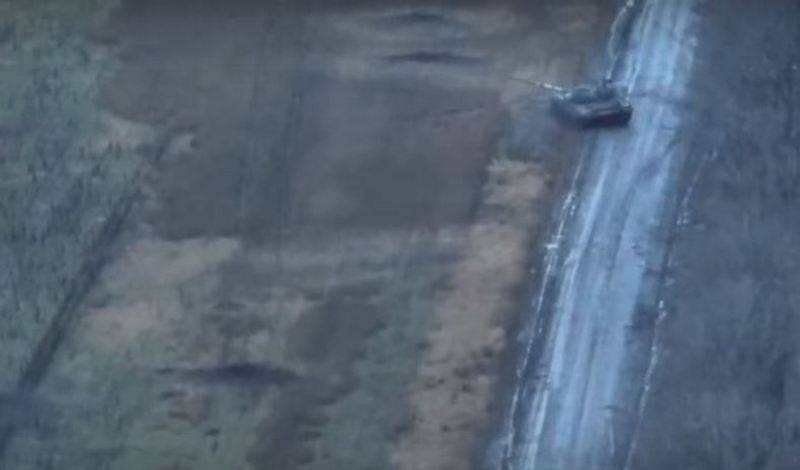 Tank The duel between Russian and Ukrainian tanks took place on one of the sections of the line of contact and was filmed from a drone. The footage of this battle was posted on Russian Internet resources.


According to available data, the battle involving three Russian tanks and two Ukrainian ones took place on one of the sectors of the front in the Donbass, where it was not disclosed exactly. The date of the battle is also unknown, but judging by the video, it is either the end of autumn, or already winter, judging by the weather.

Russian tank crews played out a bait-fishing scenario where one of the tanks, having previously left the road, took cover in a forest area, ready to open fire on the enemy as soon as his position was opened. Two other Russian tanks continued to move and slowed down in front of the alleged location of Ukrainian tanks, diverting attention from the ambush, playing the role of live bait.

A Ukrainian tank camouflaged in a forest belt opened fire on two Russian tanks, thereby revealing its position and immediately received a couple of shells from a Russian third tank in an ambush. According to available information, the tank of the Armed Forces of Ukraine was hit, after which the Russian vehicles advanced towards their positions. The battle was fought at a distance of about 500 meters, which is very close for tanks.

A tank duel is very difficult, very dangerous and, to be honest, very scary, because the tank duel took place at a distance of less than 500 meters. Our tank crew was more successful here, hitting the enemy. A smart tactic was chosen
- leads RIA News words of the Russian military.