Why was Churchill afraid of Nuremberg? 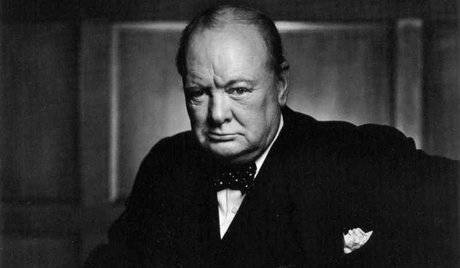 Declassified documents say that he demanded to shoot the Nazi leaders without any trial.

Britain, it turns out, was originally against the Nuremberg Tribunal and would prefer that at the end of the war the Nazi leaders without trial simply be executed or put in jail - depending on who deserves it. This became known the other day after the declassification of diaries, which was conducted in 1940-1950. the then head of counterintelligence of the British MI5 service Guy Liddell, reports The Guardian. Liddell's diaries were kept for a long time in the safe of successive MI5 chiefs, codenamed “Wallflowers.” And now they have become available (although they were edited at the same time).

According to the records of Liddell, British Prime Minister Winston Churchill announced a proposal to abandon the establishment of the Tribunal in February 1945 at the Yalta Conference of the leaders of the three Allied Powers in the anti-Hitler coalition, but this proposal was rejected by Franklin Roosevelt and Joseph Stalin. The position of the leaders of the USA and the USSR forced Britain to agree to the holding of the Tribunal.

Recall that for the first time the idea of ​​bringing the Nazi leaders to justice was recorded by the three powers even 1 in November 1943 in the so-called. Moscow Declaration. In it, the USSR, the United States and Great Britain promised each other that they "would persecute them (Nazi criminals. - Approx. KM.RU) in the most remote parts of the world ... to administer justice to them." As we see, the British understood “justice” in a rather peculiar way. Where did Churchill have such a preference for extrajudicial punishment of the judicial procedure?

Guy Liddell explains that 21 of June 1945 dictated to his secretary the following entry (it dealt with the visit of a representative of the leadership of the British Military Directorate, as well as representatives of MI5 and the Office of Special Operations who were looking for arguments in favor of a war criminal trial): Personally, I think this whole procedure is pretty awful. The Attorney General insisted that the commission of inquiry decided that certain people should be executed, and the rest to be sent to prison for different periods, that this proposal should be submitted to the House of Commons and that a certain military authority should be transferred to the detection and arrest of these people, as well as to carry out the sentence. This was a much more reasonable proposal that would not harm the reputation of the law. ”

In July, 1946, Liddell flew to Nuremberg, along with MI5 deputy head Oswald Harker, to personally oversee the trial. There, his fears that this process differs little from the show courts proved: “It’s impossible to get rid of the feeling that the defendants did most of what the 14 years were doing and that they are now accountable to the court for 28 years. This greatly thickens the atmosphere of fictitiousness of the entire judicial process and leads me to the conclusion that worries me the most: this court is a court of winners who created their own statute, their own procedure and their own rules of evidence in order to crack down on the defeated. ” .

It turns out that it would be better to inflict extrajudicial reprisals on the Nazi criminals who fell into the hands of the allies, so that this “does not harm the reputation of the law”? And then how would you order to perceive the horrendous Polish and all Western public now shooting Polish officers near Katyn, in which the Nuremberg Tribunal accused the Nazis, but the responsibility for which is now being transferred to the NKVD? After all, Katyn is a pure extrajudicial punishment (in this case it doesn't even matter who exactly it was done by)! And is she "better" in Nuremberg? It turns out that yes. This is what the critics of the judicial process, considered to be one of the foundations of international law, are based on, and relying on it can be held accountable for war crimes and crimes against humanity!

Yes, of course, the British in the world are considered to be people who are very sensitive to the law as such, and the purity of any legal process, of course, requires equal rights of the parties. In this sense, of course, the Nuremberg Tribunal cannot be considered a benchmark: there the winners really judged the vanquished. But does this mean that in this case the losers, no matter how monstrous the crimes they committed, are not at all under jurisdiction? Maybe we have no right to judge them at all, since they lived according to their own - other “laws”? Any sensible person, and not a supporter of the "purity" of the legal genre, will testify that it is not so that evil must be punished, and it is better to punish him in court than in Katyn.

The reverent before the law in general can not be considered the ultimate ideal, a kind of ultimate truth. And if the law is unfair or enacted in violation of generally accepted human norms - how would you order it to be treated? Moreover, as noted by the outstanding Russian philosopher Vladimir Soloviev, the legal field is only the lower limit of morality. Why then bow to this "lower limit"? Of course, this is not a call for non-compliance with legislation, but simply their deep semantic assessment.

But those same British, and many of our home-grown Western liberals urge us to obey virtually any law implicitly. The reasoning of the same Liddell, for example, simply faded against the background of similar assessments of the Nuremberg Tribunal, given several years ago by the Russian “human rights activist” Sergei Kovalev after which the militants brutally murdered them): “Recall the Nuremberg Trials. From the point of view of law, this is pure disgrace, this is after all the trial of the victors over the vanquished, and there have not even been any attempts to hide it. What is the equality of the parties here? This is a court that judged by specially written laws for it. The fundamental, most important principle of law was deliberately violated: the law is not retroactive. We decided that it has. And they pulled people, many of whom acted strictly in accordance with the laws of their country, which were then in force. Horrible laws, barbaric, but laws. "

And yet the true reason for all the recent attacks on the decisions of the Nuremberg Tribunal has been lying beyond a purely legal plane. Perhaps Mr. Churchill opposed such a trial because he feared that during the process all sorts of unpleasant details could emerge about the role played by both the United States and Great Britain both in Hitler’s coming to power and in his aggression against the USSR ? After all, the fact that the Anglo-Saxons sponsored Hitler and his Nazi party, starting with the 20-ies of the XX century, is no longer a secret. And the version that the strange flight of Rudolf Hess to England was, in fact, the last attempt by Berlin and London to agree on a joint strike against the USSR, now also tends to share a considerable number of experts. Yes, as a result, the publicity of all these unsightly stories was avoided (at what cost - история is silent), but there was a risk. And so everything is simple: to the wall - and the ends in the water.

And one more important note. It is clear that history does not know the subjunctive mood, and yet it would be easy, probably, to predict the reaction to the Tribunal if (God forbid, of course) the leaders of Russia / USSR would have been the defeated side. Almost certainly we would be inspired (if we, the Russians, were after all preserved), that such a “Nuremberg” is the standard of modern law, that we should honor it as an icon. And repent, and repent, and repent ...

But here is the bad luck for the West: we (or rather, our grandfathers and fathers) then came out victorious. And the decisions of Nuremberg are the most important integral part of the entire post-war world order, where Russia / USSR was the winner in the first place. Grandfathers and fathers provided our state with the status of a great power, which, by its righteous court, has the right to judge the criminals who have brought our people incalculable suffering. It is precisely to this point that all attempts to diminish the significance of the decisions of Nuremberg and reconsider the other major results of World War II are aimed at undermining and devaluing this very status.