Ministry of Defense: In Zaporizhia and Kryvyi Rih directions, firing points of the Armed Forces of Ukraine, firing at our positions, were suppressed 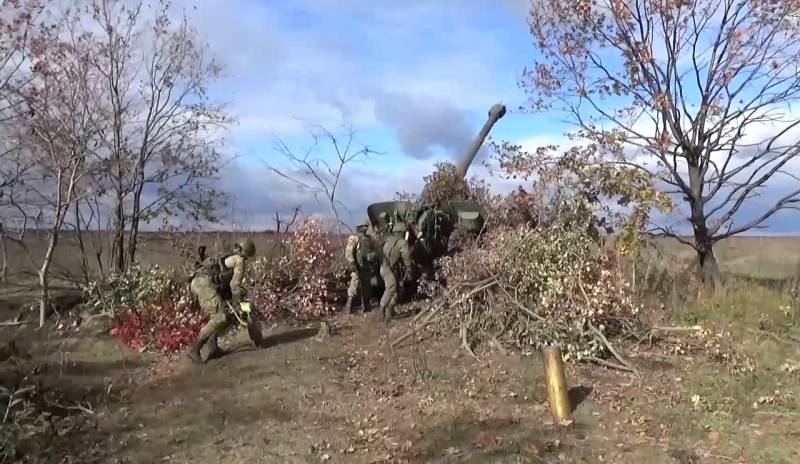 Today's report of the Russian Ministry of Defense does not contain information about the offensive actions of the RF Armed Forces in any sector. Although it is known from other sources that the onslaught of Russian units is maintained wherever a successful advance was previously launched. Konashenkov's briefing is devoted only to repulsing enemy attacks, shelling by the Armed Forces of Ukraine and, importantly, the counter-battery work of our artillery.


Thus, the rhetoric of the unilaterally declared Christmas truce by Russia is observed, but it is confirmed that the provocations of Ukrainian militants will also be followed by a harsh response during this period.

And one more innovation in today's report on the situation at the front from the Ministry of Defense. Previously, almost all of Konashenkov's messages began with the standard introduction "The Armed Forces of the Russian Federation continue to conduct a special military operation." Today, for the first time, this wording was not only changed, but at least clarified - instead of the RF Armed Forces, a special operation in Ukraine is being carried out by the "Joint Group of Russian Troops (Forces)".

For insiders, especially those who often criticize the overly bureaucratic, multi-tiered command and control system in the Russian military, this change in wording can speak volumes.

Regarding shelling by the Armed Forces of Ukraine, the Ministry of Defense reports that the enemy fired eleven times from mortars and fifty-one times from artillery at our positions in the Krasno-Limansky, Soledarsky, Avdeevsky and Maryinsky directions.

More than 60 large-caliber shells were fired at the residential quarters of Donetsk, Makiivka was fired from the HIMARS MLRS in the DPR.

In the Zaporozhye region, in the Kherson and Krivoy Rog directions, the Armed Forces of Ukraine tried to conduct massive fire on our positions. All enemy firing points were opened and suppressed by our artillery.

The cannonade did not stop in other areas, where Ukrainian units tried to attack the positions of the RF Armed Forces. An attack by units of the 14th mechanized brigade of the Armed Forces of Ukraine was repelled near the village of Sinkovka, Kharkiv region. An attack by two assault groups of the 80th and 95th air assault brigades of the Armed Forces of Ukraine was repulsed in the Krasno-Limansky direction in the area of ​​​​Serebryansky forestry.

The attempts of the 110th mechanized and 79th air assault brigades of the Ukrainian army to launch a counteroffensive in the areas of the settlements of Krasnogorovka and Georgievka turned out to be fruitless. An attack by the 108th Territorial Defense Brigade of the Armed Forces of Ukraine was repulsed near the village of Novomayorskoye in the Donetsk Republic.

Everywhere the enemy was stopped and retreated, losing dozens of servicemen killed and wounded, leaving several units of wrecked armored vehicles on the battlefield.

In the air, for knocking, our anti-aircraft crews shot down four Ukrainian UAVs, intercepted five rockets of the Uragan and HIMARS multiple launch rocket systems.

Work at the front continues with no less intensity than before the announcement of the ceasefire.