Nicaraguan channel: does the project have a future?

November 10, 2012
39
Western media pretend that the project of the Nicaraguan channel does not exist. None of the major newspapers in the United States, Britain, Germany can find materials on this topic. No, not that there are none at all: small notes come across - say, that some investors showed interest in the Nicaraguan channel, but they will still think, think long and hard ... And then there should be a hint that there is nothing: there is the Panama Canal. 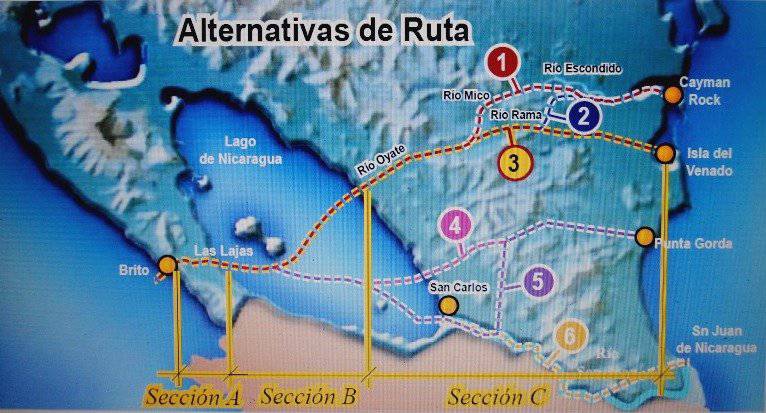 There are no headers with exclamation marks: “The project of the century!” Or “Join hands, friends!”

That's it - friends. And the project has some friends.

Western states are not listed not only as friends of Nicaragua, but also as partners. Very much independent Comrade Ortega, standing in this country at the helm. Greetings to Chavez by the hand. And with Castro. In general, a socialist. This comrade constantly ignores the instructions of Washington, as if he, that is, Washington, does not exist at all. Well, and Washington, in strict accordance with the Old Testament, meets Ortega according to the ancient commandment - according to the one in which it says about the eye, a tooth and a fracture.

So they ignore each other while Comrade Ortega is looking for capital. Searches, as noticed in passing in Huffington PostBecause Nicaragua does not have enough money for such a project, so the country will have to seek the attention of international investors.

October 30 President Nicaragua confirmed that Russian companies will take an active part in the construction of the inter-oceanic canal connecting the Pacific and Atlantic oceans. He said that with the return to power of the Sandinista National Liberation Front of Nicaragua, long-standing relations with Russia resumed in 2007, and this cooperation in all areas greatly appreciates the Nicaraguan people.

The law on the construction of a canal between the Atlantic and Pacific oceans through Nicaragua was signed by Ortega back in July. Earlier, a grand project was approved by the parliament of the country. It is assumed that the channel will be wider and deeper than the Panamanian counterpart. (By the way, the Panama Canal with its congestion, traffic jams — vessels wait for a week to go through the canal — it is undergoing reconstruction, which should increase its carrying capacity).

But only few people are eager to win it.

Information about the project is spread by very few media today. If you do not talk about Nicaraguan, it is a few media of some Latin American countries. In Cuba, Prensa Latina enthusiastically writes about the channel. In Russia, the project is covered in a variety of media - from paper to electronic, including in English. Languages ​​are written about him by the Foundation for Strategic Culture, Russian Today, The Voice of Russia.

Another month after the law was signed by the president, project director Eden Pastor said that the Nicaraguan government held talks with potential foreign partners, including Japan, China, Russia, Venezuela, Brazil and South Korea.

West and does not smell.

30 billion is not much. Terrain favors the construction of the channel: there are no high elevations in the territory, and there is an opportunity to use Lake Nicaragua.

“It is also important,” writes Alexey Pilko, “that the implementation of such a grand project will finally bring to the agenda of the international community, which has recently been tormented by a search for a way out of all kinds of conflicts and crises, a truly creative project that will have a beneficial effect on the development of world economy. It is clear that Nicaragua itself will not be able to “pull” the construction of the canal either financially or in engineering terms. Therefore, the money, if the implementation of the project starts in practice, will be given by international investors. ”

The new transoceanic artery will become international and neutral in the full sense of the word. This cannot be said of the Panama Canal: until 1999, it remained under the control of the “world hegemon”.

Neil Nikandrov ("Fund of Strategic Culture") notes that from the point of view of the State Department, the Pentagon and the American special services, the need for an alternative channel between the oceans is overdue: the Panama Canal is functioning at the limit of possibilities. But the trouble is: the Nicaraguan president is perceived in Washington as a politician from a hostile camp, cooperation with which is impossible.

Ortega, the analyst writes, pursues an independent policy, ignoring the shouts of Washington about the "inadmissibility" of certain actions. The implementation of the channel construction project would strengthen the position of the Sandinistas in the country and expand the influence of the ALBA block (Alliance of Peoples of Latin America). The President of Nicaragua is not tired of repeating that the construction of the canal should be a common cause for the countries of Central America.

No, we will not take. The channel is a threat to US interests. Ortega has too much independence. There are too many Latin American and even international - even more dangerous - friendships. And at the same time a lot of benefits. No no and one more time no.

“… In May 2012… Phyllis Powers arrived in Managua… Her diplomatic career was dynamic: she served in Russia, Poland, Peru, Colombia, Panama. <…> It was the Panamanian experience that determined her direction to the post of ambassador to Nicaragua. The construction of the interoceanic canal is a priority topic for the US Embassy in Managua. The tasks were set specific: collecting information, working out recommendations to prevent the implementation of the project, as well as preparing theses of a propaganda campaign regarding its "unpromising".

These theses are already widely circulating in the mass media. They say, the government of Ortega, from “tactical considerations”, underestimates the amount of investment required for the project: costs will amount to 50-60 billion dollars. After the completion of construction, it will take several decades to recoup the costs, if they can be recouped at all. Nicaragua claims to have a 51% stake in the future consortium, leaving investors with the entire 49. Potential construction participants (Brazil, China, Japan, Venezuela, South Korea and others) should seriously weigh the project's profitability. There are no guarantees that the Nicaraguan channel will be loaded with work, since the Panama after modernization will retain most of its traditional customers. It is best for Russia to refrain from the Nicaraguan project, because for her it is more important to activate the Northern Sea Route and modernize the Trans-Siberian Railway. ”

Thanks to the described parameters, large-tonnage sea vessels with a payload capacity of up to 270 thousand tons could use the Nicaraguan water corridor (a Panamanian competitor can skip transports with a deadweight of no more than 70 thousand tons, and after upgrading, which should be completed by 2015, no more than 130 thousand t).

Today in the world there are only 900 vessels with deadweight of more than 130 thousand tons. Members of the Nicaraguan commission believe that by the 2019 year - the channel “launch time” - there will be three times more of them.

The project of the channel in several variants is made up now two Dutch companies. Design cost - 720 thousand dollars. At the beginning of 2013, it will be ready.

There is viewthat for the sake of building a canal and at the same time reducing unemployment in Nicaragua, the government of Daniel Ortega can make a deal with its worst enemies - the Americans. American investors are supposedly ready to invest almost half of the necessary funds, while the other half will come from Japan, Brazil, South Korea, perhaps Russia and (almost indisputably) China.

In order to get at least some answer to the "American" question, let's listen to the original source.

The construction manager of the Greater Inter-Ocean Canal of Nicaragua, the co-chairman of the Russian-Nicaraguan Intergovernmental Commission on Trade, Economic and Scientific-Technical Cooperation, Manuel Coronel Cowts, gave an interview in November "International Life"in which he told who would supposedly take part in the grand construction of the century:

“We held talks with Russia, Brazil, Venezuela, China and Japan. There is a preliminary agreement with a number of other states. But they will have to show political will, provide economic support to the project, acquire shares and become owners of a part of the established consortium. We assume that each share will cost one thousand dollars. Any private person can also become a shareholder ... ”

Manuel Coronel Cowts indicated that the construction would give work to approximately one million Nicaraguans. He also noticed:

“... And with the United States, we have no problems. There are American companies that are willing to participate in the project. Part of the shares we will place on the US stock exchange, approximately 2 million 200 thousand shares - on the New York Stock Exchange. In addition, we intend to hire a management company, either American or Russian, through a competition. Technicians and scientists can enter it. She will manage the entire construction process. To date, our project in its scope has no equal in the world. This is truly the project of the century. And we are determined to implement it. "

Thus, a political game is one thing, and an economic project is another. If the American government considers it necessary to put sticks in the wheels of Ortega, then private American capital may have its own opinion. Ortega, like his friend Hugo Chavez, has not yet been included in the list of international terrorists.

However, perhaps, ardent comrades Ortega and Cautes overestimate the attention of private American contractors. Shares can be placed, but the main thing is to sell them.

"... It can be assumed - пишет Columnist Alexander Moiseev - that in ten years, when the Great Inter-Ocean Canal of Nicaragua enters into service, and the first heavy cargo vessels pass through it from the Atlantic to the Pacific and vice versa, the new waterway will be named Augusto Cesar Sandino, who once dreamed of freedom and independence of their homeland, dreamed of the channel, fought and gave his life for it. He dreamed of building an inter-oceanic canal. Therefore, it would be quite logical to appear on the world map of the Sandino Channel. But the decision on this subject to take only the Nicaraguans themselves. "

It is difficult, of course, to imagine that the channel, named after the “father of the anti-imperialist people's democratic revolution,” will be built by American contractors ...