Stanislav Tarasov: Who and what threatens Turkey today 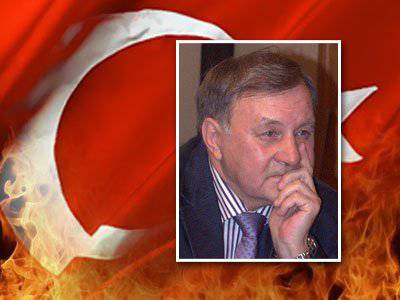 Ankara is going to ask NATO to deploy Patriot missiles in Turkey due to the exacerbation of tension on the Turkish-Syrian border. This information was published by the Hürriyet newspaper with reference to a high-ranking Turkish diplomatic source. According to him, "the plan includes the deployment of missile defense systems in Turkey." NATO Secretary General Anders Fogh Rasmussen quickly responded to this message. He said that NATO did not receive a request from Turkey to deploy missile systems on the border with Syria. At the same time, a certain clarification was made: "The alliance has plans to protect Turkey from possible threats."

Information "leaks" in the Turkish media, organized by "certain forces" and the reaction to them from the North Atlantic Alliance resemble virtual "games" with an address sense. It’s one thing when Turkey takes part in the US global missile defense system, which was decided at the NATO Lisbon Summit 19-20 in November 2010. At the same time, the project on the deployment of missile defense elements in Turkey is motivated as opposition to the “nuclear threat from Iran,” although Turkey had previously opposed the designation of any particular state as a “source of threat. Such a position was specifically stipulated as the main condition for consent to the deployment of missile defense elements. Now as a "threat" is called Syria. Then, as recently as the Turkish and many Western media actively discussed the issue of the likely invasion of the Turkish army into Syria, and not vice versa. The only country that warned Ankara that it was ready to deliver a military strike against NATO facilities in Turkey, but only if military intervention in Syria followed the territory of that country was Iran. Therefore, speaking of Syria, as a potential threat, Turkey is still referring to Iran. And this is when Prime Minister Recep Tayyip Erdogan proposed Iranian President Mahmoud Ahmadinejad to create a tripartite committee - Turkey-Russia-Iran - “whose goal will be to resolve the Syrian issue." Is it a coincidence?

The fact is that the visit of the Foreign Minister of Russia Sergey Lavrov to Cairo, the results of his talks with the UN special envoy and the Arab League on Syria Lakhdar Brahimi, open a "corridor of opportunities" for a Syrian settlement. First, an agreement was reached with the League of Arab States to form a common cooperation forum, and to hold its first meeting at the level of foreign ministers in Moscow before the end of 2012. In this context, the report on the visit of Egyptian President Mohammed Mursi to Moscow at the invitation of Russian President Vladimir Putin should be assessed. According to the representative of the office of Egyptian President Yasir Ali, Egypt is counting not only on restoring special relations with Russia in various fields, but also hopes for Moscow to exert the necessary influence to solve the problems of the Middle East region, especially in Syria.

Secondly, during the meeting between Lavrov and Brahimi, a common position was determined: to seek a political way out of the Syrian crisis on the basis of the Geneva accords. They are known to provide for a cease-fire in this country, a dialogue between official Damascus and opposition forces, the creation of a transitional government and presidential elections. Only in such a scenario can you keep the course of events under international law, to prevent the spread of political chaos in the region. We also note the fact that the signature of Turkey stands under the Geneva communique, and the fact that, according to Russian Deputy Foreign Minister Mikhail Bogdanov, Moscow decided to support Ankara’s initiative to create a new negotiation format to resolve the crisis in Syria.

This is due to the fact that the so-called Islamic Quartet on the Syrian settlement, Egypt-Iran-Saudi Arabia-Qatar, previously created at the initiative of Cairo, did not work because of the refusal of Saudi Arabia to act together with Iran. Then, as the format Turkey-Russia-Iran has a certain prospect, if only because two countries - Russia and Turkey - are signatories of the Geneva document, and Iran, in principle, supports its main positions. If the combination proposed by Turkey is supported by the League of Arab countries as an intermediate stage of the Syrian settlement, then there is a chance to make a "diplomatic breakthrough" in this direction. Moreover, the implementation of the initiative of Turkey would significantly strengthen its diplomatic positions throughout the Middle East, because in this case it will get a real chance to contribute to the plan of action for a settlement in Syria, which is being prepared by the UN Special Representative and the Arab League Brahimi.

But at the same time, offering different negotiation formats for a Syrian settlement and probing the soil for the likely deployment of Patriot missiles on its territory are techniques for using "double standards" in the policy. The outcome of such diplomacy can be not a settlement of the Syrian crisis, but an arms race, and the entrance to another foreign policy impasse. Because, according to the Turkish newspaper Yeni Asya, “Turkey can overcome the deadlock in the Syrian crisis only if it reaches a“ balance of accords ”, both at the regional level and internationally. But exposing the neighboring Muslim countries as a source of threat, Ankara does not it is only losing political and diplomatic maneuverability at the regional level, but is also drifting more and more towards the object of international politics, the newspaper Usak gündem, which believes that if the world community t perceive Turkey "only through the filters of the Syrian crisis and military-political confrontation with neighboring countries, then it will inevitably be withdrawn from the" game. " This, in our opinion, is now the main source of political danger for Turkey. Exit this difficult situation with the help of NATO Patriot Turkey missiles are unlikely.