"Now you're in the Army." "Bread and Circuses" 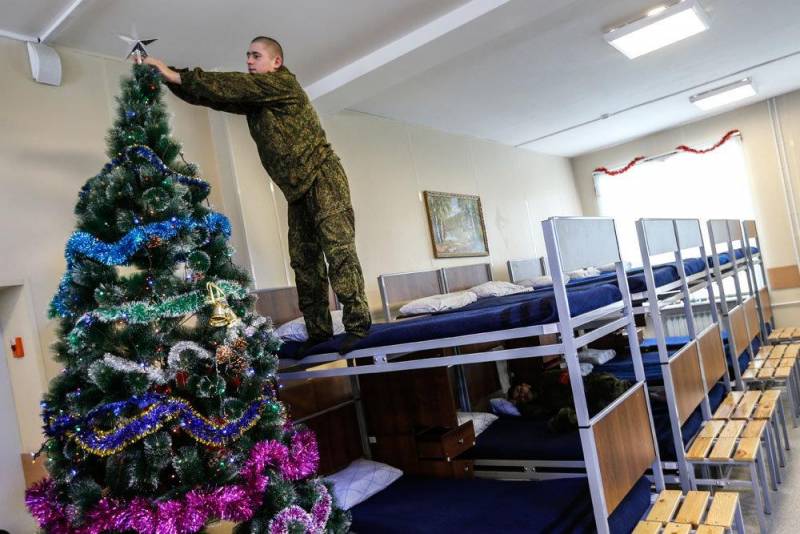 
"Now you're in the Army." Part four of the New Year's fairy tale with a sequel.

Since we, the Avtobatovtsy, were also seconded to civilians, and to construction battalions, and to rocket men, we celebrated all sorts of official holidays on a grand scale. The list of official holidays, including the formation of a unit on the parade ground, the presentation of buns to especially distinguished ones, a festive dinner, a festive film screening, a festive amateur concert, and so on, was as follows:
• New Year
• February 23
• 8 March
• 1 May
• 9 May
• Day of Automobile Troops
• Day of construction troops
• Day of the Rocket Forces
• November 7

Unofficially, on a slightly smaller scale, they celebrated:

Underground celebrated everything else :)

A week before the official holidays, the “hodgepodge” of our amateur art unit was literally locked in the garrison assembly hall, freed from everything, and they spent the day and night there, preparing a festive concert. Even the most famous "pilots-raiders", for whom the lip of the district sobbed with bitter tears, and the disbat dreamily licked their lips, if they knew how to recite patriotic verses with an expression, sing a song, dance a lezginka, became "untouchable" for this time. Their choice was something like this:


If the concert went off with a bang and the High Inspection Commission put a solid five with a plus, they were forgiven for almost all of their flights. Until next flights and holidays.

... In our unit, almost all the soldiers were narrow specialists in their field of activity, and therefore, after a year of service, each was charged with the task of finding and educating a replacement for himself. Yes, according to the law, they could not be fired after 2 years of service. But after a couple of times the commander of the unit exemplarily dismissed several demobilized soldiers literally under the New Year's chimes and the boys found themselves outside the checkpoint, on the street at night, in a snowstorm and -35, the buses no longer run, and the station is 50 km away, - everyone tried to bring up a worthy replacement. After the Order, transfer all cases to him, perform a demobilization chord - and be free with a clear conscience.

Dembel chord usually took from 1 day to a month. I did it, they accepted it - the next morning you get a “runner” in your hands, you sign everywhere that you don’t owe anything to anyone, and by the evening you are already on the train that takes you home.

When choosing a candidate for shifts, first of all, you looked at the business qualities of your student, and if there was a choice, then at his nationality or place of residence. So, for example, when choosing from four candidates - three Tatars and one Jew, our AWP storekeeper, himself from Tatarstan, nevertheless preferred to take a Jew. Because managing a warehouse is not a big deal for you, you have to, so to speak, take a creative approach to the process.

But in general, "with an average temperature in the hospital", each of the areas of activity was kept by its own "grouping". The Belarusians and Ukrainians were in charge of the pig farm, the Uzbeks were densely seated in the kitchen, the raters and accountants were the Balts, Chechens and Dagestanis guarded part of the workstation, there was a food warehouse under the Georgians, and so on and so forth. Behind the Lezgins and Ossetians there was a club and all the amateur performances of the unit.

...After a year of your service and before his dismissal from the glorious ranks of the Army, your Chief passes you all the cases (and even his stash and caches), and you - bam! - become a Respected Member of the Society.

The first year, while you are a greenhorn, with your tongue hanging out like a stalker at a godfather, it seems to you that you have ended up in a branch of Hell on Earth. And here they are the first to respectfully greet you and look ingratiatingly into your eyes. This is, of course, a big plus.

But now you are already in a kneeling position standing on the carpet at the authorities, and you for any of your or your student's jamb - in all respiratory and respiratory. It’s already you in the winter in severe frost and snowstorm at night that they pull you out of a warm soldier’s bed and take you to who knows where, because something happened to the electrics there.

And then you remember with nostalgia your first year of service, like a vacation in a branch of Paradise on Earth :)

Just for an example. Here the major general arrived and gave the task: to urgently restore the electrics of the zilka loaded with fresh concrete, which ZIL-131 dragged on a rigid hitch to the workstation. And your teacher, in the pouring autumn rain, at +5 overboard, makes you run around the auto cemetery and try to find and remove a particularly rare elistrian findiklyuk, which is not even in the Chef's stash (I am silent about the warehouse - they were not even physically born there ... yes no, and according to the documents it has not been received).

And when you yourself find yourself the Chief in an approximately similar situation, then it dawns on you that if your Student does not get this findiklyuk, then at best, a lip for 10 days, and at worst, a disbat for a year or two, and you, not the Student. Moreover, on the same lip, you will not cool off in a punishment cell for these 10 days, but you will sort out the electrics on all cars - from Zilka and KAMAZ to Zhiguli and Volga - and moreover, completely free of charge, that is, for nothing!

And then a swim in the mud up to the neck in fuel oil will seem like a summer vacation at sea, even taking into account the task: “This is how you suddenly find something electric on a car corpse that you haven’t seen in your eyes yet - take it off and drag it to me, that’s it !"

... The design of the club with all sorts of garlands and running lights at discos was up to the Author. And he had seen enough of what kind of hard labor the "artists" had. Ha, yes, compared to them at my job, I was lying on the stove and spitting at the ceiling!

After all, what is, for example, a disco on March 8? Only in our unit and at the AWP there were 20+ women and girls, and the same number of civilian civilians. They had to be entertained with dances, and not simple ones, but with the same waltz, for example. And half of the officers on the dance floor showed themselves a little more elegant than an elephant in a china shop. And there was always a woman in the High Inspecting Holiday Commission - and God forbid, she won’t dance!

Only one thing could be worse: not paying attention to our Saleswoman from the garrison chip, who liked to rock on the dance floor. They said that once such a big oversight happened. The next working day, our “branch of the Eliseevsky grocery store” turned into an ordinary provincial food store, where three-liter cans of tomato and birch juice were side by side with sprats in tomato and herring in their own juice.


Of course, the spectacles were always accompanied by bread. Skewers with pilaf for the whole part was by default. And after the official celebration, the Georgians from the food warehouse set the table for a narrow, so to speak, circle, at the same time ensuring that the crystal decanters were filled with a festive “compote” of Georgian wines. After all, there is alcohol in the army?! No no! But “compote” is always welcome ☺️ And when the “client” matured and began to turn a blind eye to the suspiciously smelling “glass of water”, chacha was put on the table.

By morning, it was impossible to look at the boys from the amateur art platoon without tears, because the dances continued until you dropped in the truest sense of the word.


Then the carriers from the second company took the women home and handed them over to their relatives on receipt: “A female corpse, 1 piece. Accept and sign."