November 8, 2012
1
E-150 Soviet experimental fighter-interceptor, created in the OKN 155 them. A.I. Mikoyan. The main tasks that faced the new fighter can be formulated as follows: automatic attack and automatic targeting, interception and subsequent destruction of enemy bombers at supersonic speeds in any meteorological conditions, including in the absence of optical visibility. It was executed only in the 1 instance.

The fighter E-150 even in its appearance was seriously different from all the previously built aircraft. The machine was a sredneplan with a triangular wing and fuselage with a circular cross section. The fuselage of the aircraft most resembled a pipe that had almost the same diameter along its entire length. The plane had a delta wing of small elongation, the aerodynamic properties of which were already quite well studied on previous experimental fighters E-4 and E-5, the wing had a sweep on the leading edge in 60 degrees. The pilot's cockpit lantern opened forward and upward; it did not have a windshield and rather smoothly passed into the gargrot, which reached for the base of the keel. The cockpit canopy glazing was made of special T2-55 glass with a thickness of 12 mm. This glass could withstand the temperature of aerodynamic heating within 170 ° С.

The air intake of a large-diameter aircraft included a central body in the form of a cone. At the same time, a “multi-jump” cone made of a dielectric material was mounted in the nose part of the fighter's fuselage; this cone consisted of 3-x stages. It contained an antenna for the Uragan-5B radar. This radar station had a long range of detection of air targets and could operate in the review mode, as well as in the target tracking mode. Radar "Uragan-5B" was associated with the receiving telecommand system and the fire control system, as well as the autopilot control. The 3-x interaction of these devices provided the aircraft with the execution of an automatic flight directed from the ground into a given zone and the subsequent target acquisition with radar signals and an attack at any time of the day and in all weather conditions. Attack of the target was carried out after combining the target with the tag of the radar sight of the fighter-interceptor. 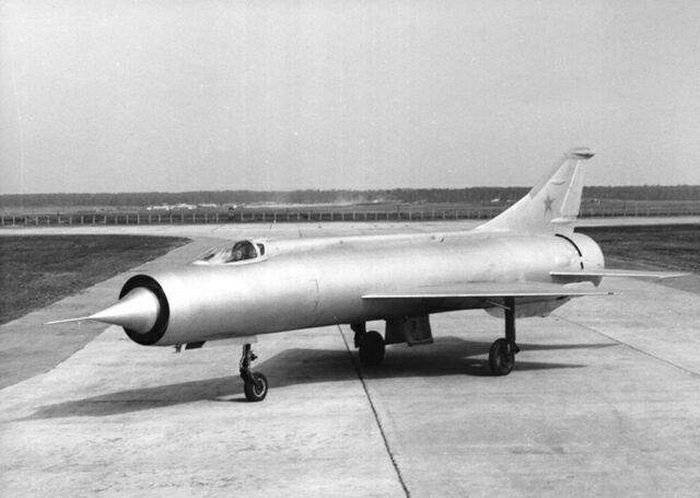 Experimental fighter E-150
To improve the stability of the fighter at supersonic flight speeds under the fuselage in the tail section was set aerodynamic crest. Also in the lower part of the fighter fuselage were 3 brake shield. In order to reduce the length of the run of the aircraft after landing, the parachute PG-5605-58 with a total area of ​​18 square was used. meters On the lower surface of the wings of the fighter-interceptor, it was planned to install one pylon one by one, which served to suspend the air-to-air missile system.

The E-150 interceptor fighter was designed to fly at speeds of around 2 800 km / h at altitudes of 20-25 km. At the same time, the P-15-300 aircraft engine was designed from the very beginning for testing on an unmanned aircraft and therefore had a very small flight resource. This turbofan engine could develop maximum thrust in 6 840 kgf, and at the end of the boost, thrust increased to 10 150 kgf, the engine was equipped with a special ejector, which allowed it to show the total thrust force in 19 800 kgf at an airplane speed of M = 2,4-2,5, in addition to this significantly reduced bottom resistance. Due to the high aerodynamic heating of the fighter at high flight speeds, the most heat-stressed elements of its design needed to be made of heat-resistant materials (for example, stainless steel). The fuel system of the E-150 fighter according to the latest draft of the draft design included 5 soft fuselage and 2 wing fuel tanks. The total fuel supply of the fighter was 4750 l.

By September, the 1958 year was assembled the first prototype of an E-150 interceptor fighter. After that, during the 6 months, the car passed ground checks. Then, even before the middle of 1960, for the car, they waited for a quality engine, so that only 8 in July, AV Fedotov, the test pilot of the OKB, raised the car for the first time to the sky. From that day, the fighter's factory test cycle continued, which ended on January 25 of the year 1962. During test flights from 21 January to 30 March 1961, the speed of the fighter reached M = 2,1, and the maximum height of the flight was 21 000 meters. After that, the fighter had to replace the engine, after replacing the engine, the E-150 made more 20 sorties. In the 28 flight, the aircraft was able to reach a maximum speed of 2 890 km / h (M = 2,65) at an altitude of 19 100 meters, while the engine still had a thrust reserve. The take-off weight of the fighter-interceptor in this “record” flight was equal to 10 175 kg. The largest ceiling that the E-150 fighter managed to reach in tests was 22 500 meters.

Experimental fighter E-150
It seemed, at last, the OKB-155 specialists managed to create a fighter that was so necessary for the Soviet air defense system. However, the main obstacle in the way of the designers was the engine Р15-300, which had a small resource. The resource was sufficient only for ground and bench tests, followed by installation on the aircraft for the sole flight. At the same time, the fighter-interceptor could be launched into mass production only with a reliable and spent engine. That is why the line of interceptor aircraft was continued by the E-152.

Performance characteristics of the E-150: 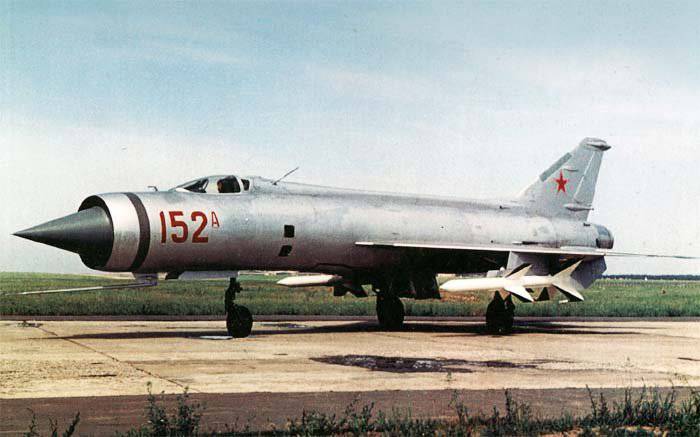 Experimental fighter E-152A
The experimental E-152 interceptor fighter was born as a result of the crossing of the experimental E-150 and E-152А aircraft designed to test the P-15-300 engine and to test the Uragan-5B automatic interception system, as well as new UR K- 9. Taking into account the recommendations of test pilots A. V. Fedotov and G. K. Mosolov, the new fighter improved ground stability, reduced the specific load on the wing, eliminated vibration of the ailerons and shaking the ends of the wing. A new wing was created with an increased area, which was achieved through the use of a larger end chord, which provided greater rigidity for the suspension of guided missiles. The nose cone of the aircraft was a three-stage, as on the E-150 and fixed. A perforated zone was mounted on the cylindrical base of the nose cone, which served to drain the boundary layer in order to increase the total pressure recovery coefficient in front of the compressor. The ejection system provided for the pilot to protect the cockpit lantern. The main element of the emergency escape of the machine by the pilot was the ejection seat of the SK-2.

Changes that have affected the design of the wing of the aircraft, have increased the track of the landing gear, which in turn helped to improve the stability of the machine during maneuvering on the runway. The track stability of the fighter-interceptor has been improved by expanding the chord of the keel, as well as increasing the area of ​​the ventral crest. At the bottom of the E-152 fuselage was one brake flap, and in the tail section of the fighter there was a container with a braking parachute, the same as on the E-150.

All aircraft steering surfaces were hydraulically controlled. The hydraulic system operated on AMG-10 slurry under pressure in 210 atmospheres. The first P15-300 engine installed on the fighter could develop thrust in the maximum mode up to 6 620 kgf, and in the afterburner mode 9 935 kgf. Like the E-150, the E-152 fighter was equipped with an ejector for a sharp short-term increase in thrust. The fuel was in the 6 fuselage, as well as the front and rear wing tanks. The total fuel supply of the aircraft was 4 930 liters, while an additional fuel tank with a capacity of 1 500 liters could be installed under the fuselage. 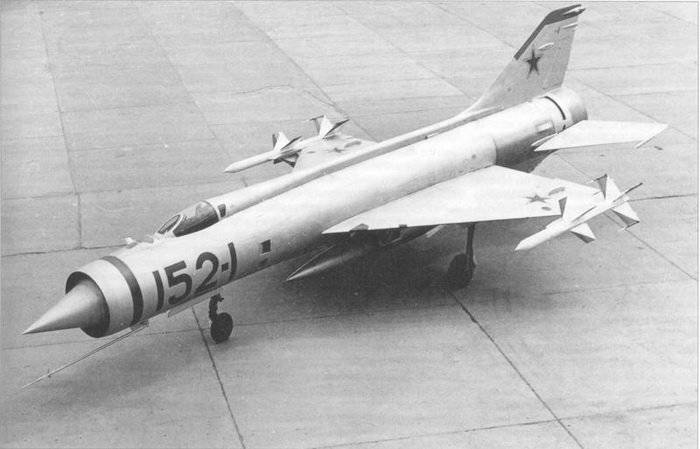 Experimental fighter E-152
The structure of the main fighter equipment includes automatic radio ARC-10 "Ingul", VHF RSIU-5, rangefinder SOD-57MU, autopilot AP-39, the defendant SRO-2M "Chrome", on-board equipment "Smerch" systems, radar " CPU-1 ”, as well as a number of other devices. The fighter’s armament included two K-9-155 missiles, the launching devices of which were located on the wingtips of the aircraft.

The first E-152 / 1 interceptor built arrived at the 16 test airfield in March 1961. During the first flight, a temporary centering weight of 263 kg was mounted in the nose of the aircraft. For the first time, the plane was lifted into the air by test pilot GK Mosolov. In this case, the tests of the fighter regularly stopped due to problems in the power plant. At the fighter they managed to change the 5 engines, but none of them was reliable enough.

Despite this, the X-NUMX world record was set on the experimental E-152 / 1 fighter:

Performance characteristics of the E-152: