British Navy: Repair of the aircraft carrier "Prince of Wales" will not be completed before spring 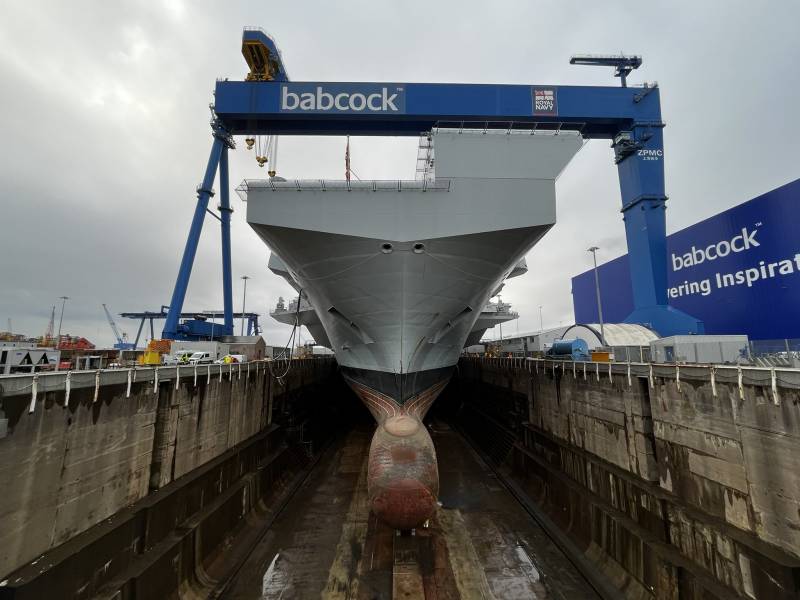 British sources confirm the information that the deadlines for the completion of the repair of the Prince of Wales aircraft carrier will again have to be shifted. As it turns out, the contractor will not be able to meet the deadline, which means it will not be possible to carry out a complete repair of the warship, worth more than £3bn, before the spring of 2023.

Repair of the aircraft carrier will not be completed until spring, as originally planned.
The repair is carried out due to the fact that HMS Prince of Wales broke down during her voyage to the United States for a "diplomatic visit". This visit was planned in August 2022 at the same time as a stage of sea trials. As a result, the visit did not take place, the tests were considered unsuccessful, since the British aircraft carrier lost speed near the Isle of Wight. A group of divers working at the site then found a broken clutch on the right propeller, which weighs about 33 tons.

An aircraft carrier with a displacement of 65 tons had to be towed back to the port of Plymouth, from which he did not depart even a couple of tens of nautical miles. In Plymouth, several stages of the study of the aircraft carrier by the engineers who designed it have already been carried out. The repair is being carried out in dry dock at the Babcock shipyard, where this huge ship was eventually moved.

At the moment, there is no exact information as to when exactly all the necessary repairs will be completed. But it is known that their value continues to grow.