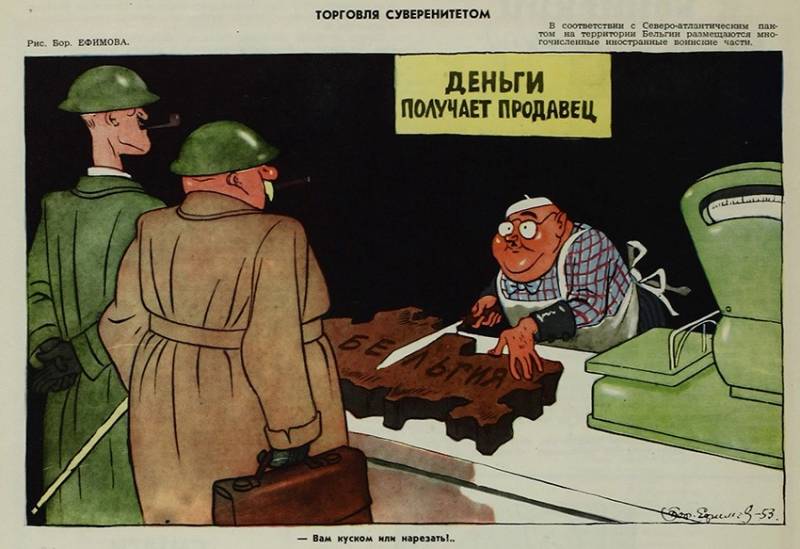 
Yesterday's allies are today's enemies. Image of the West in propaganda

During the Great Patriotic War, Western countries, especially the United States and Great Britain, were shown in all media as loyal allies who provided invaluable assistance in the fight against Nazi Germany and its allies. However, the war ended, and soon the “revelations of the world imperialists” familiar in the 1930s returned to the newspapers. Relations between the USSR and its former allies escalated, and this aggravation was called the Cold War. This term was first used in 1946 by George Orwell, and has since become firmly entrenched in the world's media.

At the end of Stalin's rule, the USSR again fenced itself off from the rest of the world. In the late 1940s, relations deteriorated even with the formerly allied socialist Yugoslavia, whose leader Tito did not want to be Stalin's puppet and made this clear. Later, already under Khrushchev, relations also deteriorated with China, whose leader Mao Zedong did not accept the de-Stalinization taking place in the USSR.

The deterioration of relations with the West was reflected not only in newspapers, but also in numerous cartoons, the authors of which were the Kukryniksy already known to us, as well as Boris Yefimov, Lev Brodaty and many others. In these cartoons, Americans were shown as treacherous, aggressive, and belligerent, just as the Nazis had been shown until recently.

The Americans and the NATO bloc they created were credited with conquering plans, building up weapons, violating the sovereignty of other countries. For example, in one of the cartoons of that time, Soviet propagandists were worried about the sovereignty of Belgium, on whose territory American military units were stationed. Similar actions of the Soviet Union itself, which sent its troops into Hungary in 1956 and into Czechoslovakia in 1968, were modestly hushed up, or else they were presented as "restoration of socialist legality." At the same time, for obvious reasons, Soviet propagandists no longer worried about the sovereignty of these countries.

In addition, Soviet propaganda actively exaggerated the topic of how bad things are in the West. The term "decaying West", which appeared in the 1940th century, very accurately describes such propaganda. The posters showed great opportunities for talented people in the USSR and, at the same time, the absence of such opportunities for gifted citizens in capitalist countries. It was argued that we have freedom, equality, prosperity, while they (in the USA) have lack of rights, unemployment and poverty. The propagandists, of course, did not mention the fact that there was lack of rights, poverty, and in the late XNUMXs, hunger in the USSR itself. 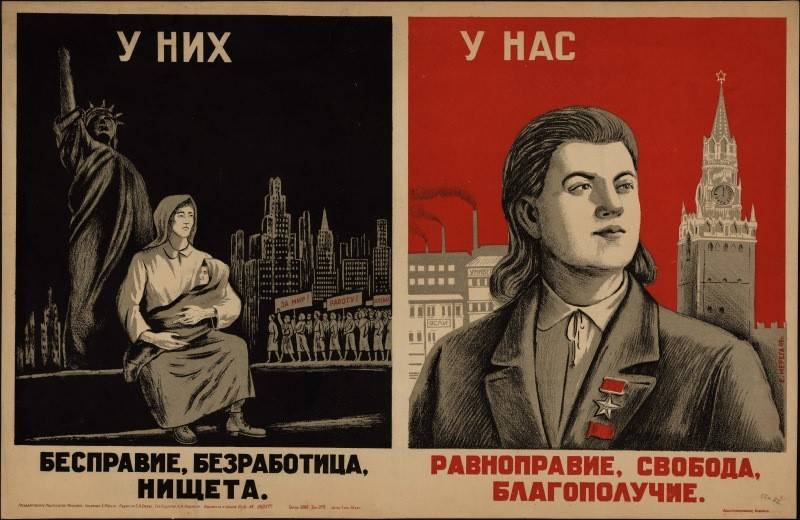 Such propaganda about the “decaying West” took place at the same time when the slogan, directly opposite in meaning, was being actively introduced - “to catch up and overtake America”. Here the propaganda has driven itself into a corner: if everything is fine with us, and everything is bad with them, then why are we forced to catch up with them, and not vice versa? The people actively went anecdote on this topic:

“The question that the Armenian radio could not answer is: what will happen when we overtake America, which is on the brink of the abyss?”
After a couple of decades, when the USSR will live out its last years, the inept propaganda of slandering the capitalist countries will lead to the exact opposite result: the extreme idealization of the West will begin in the public mind. A popular hit of that time will be the song of the group "Combination" "American Boy", the meaning of which boils down to the fact that a Moscow girl dreams of marrying an American and leaving the USSR as soon as possible. That is, in her view, an American was much more promising than any compatriot. Such mass sentiments at the end of the 1980s are the result of the complete failure of Soviet propaganda in this direction.

Cinematography: from decline to prosperity

Soviet cinema, having experienced some upsurge in the 1930s, by the end of the 1940s again found itself in a deep crisis. In all films, the ideological component was in the first place: the glorification of the correct course of the ruling party, the leader, the advantages of the Soviet model of socialism and, of course, the confident movement into a “bright future”. The main characters of such films often speak in slogans. There were no complex characters in which both positive and negative features were intertwined, as is often the case in real life, in the films of this period. Only unequivocal good and unambiguous evil. Moreover, good is always on the side of socialism, the party, evil is always against them.

If one of the directors made a film that deviated even slightly from the generally accepted canons, then such a film was immediately subjected to sharp criticism and was forbidden to be shown. A typical example is the second episode of Leonid Lukov's 1946 film Big Life. The film shows the unsatisfactory living conditions of the miners of Donbass, someone's roof is leaking, someone is abusing alcohol. The main critic of the film was Stalin himself, who stated at a meeting of the Organizing Bureau of the Central Committee of the All-Union Communist Party of Bolsheviks:

“They say now that the film needs to be fixed. I do not know how to do that. If it is technically possible, it should be done, but what will be left there? The gypsy must be thrown out. The fact that eight girls who appeared by chance turned everything in the Donbass is a fairy tale, an unthinkable thing. This also needs to be corrected. The fact that people live in terrible conditions, almost under the sky, that the engineer in charge of the mine does not know where to sleep, all this will have to be thrown out.
As a result, this film will first appear on the screens only in 1958.

A very similar situation occurred in the same years with the second series of Sergei Eisenstein's film Ivan the Terrible. If in the first series Ivan the Terrible is shown as a progressive monarch, then in the second he is a tyrant and a murderer, and the army of guardsmen he created is a nightmare for the people. This was extremely disliked by Stalin, who obviously compared himself to Grozny.

In September 1946, the Central Committee of the CPSU(b) criticized the second series:

“Director S. Eisenstein in the second series of the film “Ivan the Terrible” discovered ignorance in the image historical facts, presenting the progressive army of guardsmen of Ivan the Terrible in the form of a gang of degenerates, like the American Ku Klux Klan, and Ivan the Terrible, a man with a strong will and character, as weak and weak-willed, something like Hamlet.
The further fate of the film was the same as that of "Big Life" - it was also shown for the first time only in 1958.

Frame from the film "Ivan the Terrible"
As a result of the ban on many films, the period of 1946-1953 in Soviet cinema was called "Malokartinye". Even foreigners noticed the decline of Soviet film production in the early 1950s. In 1952, the New York Times columnist and specialist on the Soviet Union Harry Schwartz, having learned that a Hollywood film about Tarzan, filmed in the USA back in 1932, had been released on Soviet screens, wrote:

“A case worthy of surprise. Even the most venerable Stalinist dialecticians are unlikely to turn Hollywood's Tarzan Johnny Weissmuller into a communist propagandist. Edgar Rice Burroughs' savage woodland story is rife with thrills and adventure, but hardly has the social significance that the Kremlin so prizes. But the fact remains. In Moscow, they dug up old films about Tarzan, showed them in cinemas and found that the audience adores them. And this is after years of denunciations of Hollywood and its "bourgeois decay."
The post-war crisis and the decline of Soviet cinema did not last long - until the death of Stalin. Under Khrushchev, cinema in the USSR reaches a new level. Many Soviet films receive awards at foreign film festivals, and the names of the most famous of them have been heard for many years: "The Cranes Are Flying", "The Ballad of a Soldier", "The Fate of a Man", "Spring on Zarechnaya Street", "Welcome, or Strangers no entry”, “Amphibian Man”, “Height” and others. Directors of that era, such as Eldar Ryazanov, Marlen Khutsiev, Grigory Chukhrai, Georgy Daneliya, also became famous far beyond the borders of the USSR. 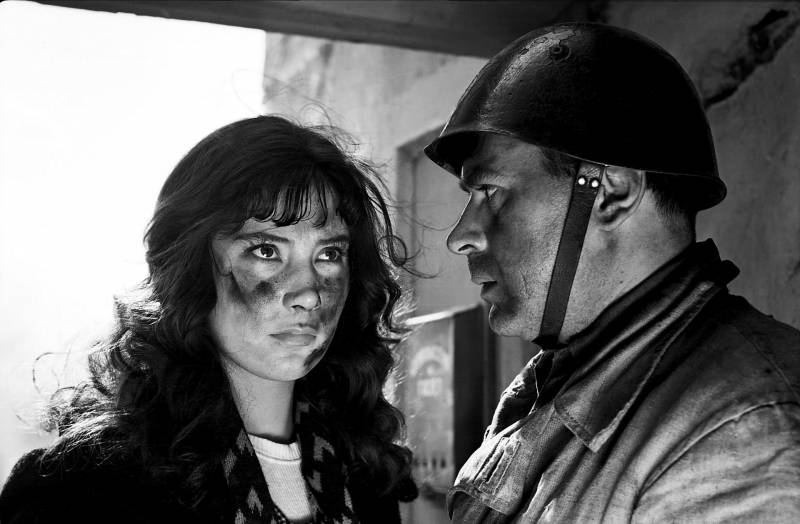 Shot from the film "The Cranes Are Flying"
During the years of the Thaw, films became less ideological and less aimed at political propaganda. They have become more art, more human, less party. For example, Khrushchev did not like the film The Cranes Are Flying and was criticized by the press as ideologically wrong, but, unlike Stalin's times, it was not banned, it was loved by the audience and even received the Palme d'Or at the International Cannes Film Festival in 1958.

All this in many respects served as the basis for the highest flowering of Soviet cinema, which will take place in the 1960s-1980s.