Azerbaijani press: Russia's relations with the CIS countries are moving to a new level 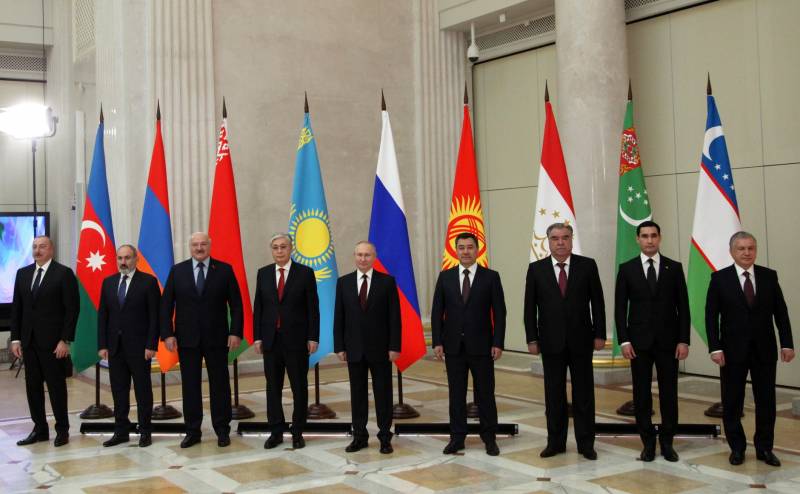 After the meeting of the leaders of the CIS countries in the Russian Federation, the Azerbaijani press notes that today Russia's relations with the Commonwealth countries are moving to a completely new level. From now on, Moscow faces a difficult task of a global nature, which consists mainly in building deep and long-term relationships with Asian and Middle Eastern centers of power, in particular, in the expanses of the post-Soviet space.


As noted in Azerbaijan, the main task of Russia in the CIS and the EAEU today is not only to find new markets for its resources (metals, energy carriers, other goods in demand), but also to bring relations with all countries of Central Asia and the Middle East to a better level, taking into account all current realities.

Moscow's interaction with the CIS countries has always been a huge advantage for the Russian Federation, giving it the opportunity to maintain both its economic influence in this zone at the expense of its own resource base, and the establishment of partnerships and trusting relations of forces of equal importance.
- they write in the press of Azerbaijan.

So, it is enough to cite the statistics of the labor market of the Russian Federation, where over the past 20 years there has been a process of replacing part of the population of working age with people from the former Soviet republics. Most of the labor migrants were in Uzbekistan (1,54 million people or almost half of their total number in 2019) and Tajikistan (more than 500 thousand people or 30,5%). In addition to these two countries, residents of Kyrgyzstan, Armenia, Moldova, and others also actively come to Russia to work.

Despite the positive dynamics in this regard, the number of departures from the Russian Federation in 2022 alone exceeded the figures for the last 30 years, resulting in a negative migration balance in the country (96,7 thousand people).

The CIS free trade area has also become one of the main factors that made it possible to overcome the negative dynamics in the share of mutual foreign trade turnover between the former Soviet republics. Over the past 20 years, this level has been gradually decreasing, from 28% in 2000 to 22% in 2010. At the same time, in the period from 2015-2022, although it dropped a little more, it remained stable at the level of 19%.

However, this year there was a turning point: Russia managed to increase mutual trade with its neighbors. So, only in the first half of 2022, it grew by 7% or $46 billion (about 3,3 trillion rubles) in monetary terms.

It is thanks to the CIS that the consumer market in the Russian Federation did not experience the shock that was observed back in 1998. In the face of severe sanctions from the West, companies, as well as merchants serving the consumer sector, managed to quickly reorganize, occupying the vacant niches after the departure of Western companies
- summed up in the Azerbaijani press.