"Now you're in the Army." "Without cabbage soup and porridge - our stomachs are empty" 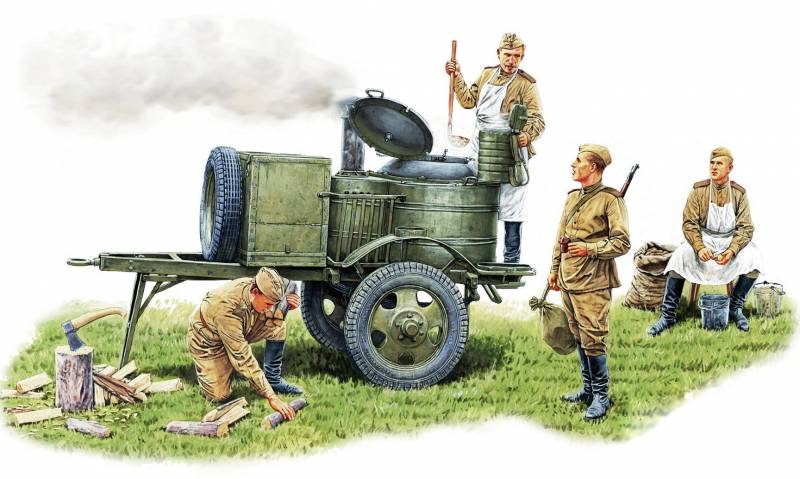 The newest история our part began 2 years before the Tale ... When one "Kolobok" for the "principle" and "backbone" shown by him:


... with a demotion in rank - from colonel to lieutenant colonel, with a demotion - from unit commander to deputy for logistics, they were sent into exile "To the village, to the wilderness, Saratov" from the ZabVO. In order to avoid ... and in order to stay away from sin ...

And it was here that Kolobok (an underground nickname, a universal favorite of the unit, would be our will - they would wear it in our arms absolutely voluntarily) unfolded in its entire breadth of a wide “Russian soul” (well, just think, his mother’s parents are an Armenian father, his mother is Jewish... his father has a Russian father, his mother is Ukrainian... most importantly, according to his passport... uh... an officer's military card - he was listed as Russian). As they say, he was in his place.

Our unit through the eyes of a newly arrived recruit:

- Christmas trees, Christmas trees... strict rows of luxurious Christmas trees... It was easier to get lost in them than to spit. Unless the VVs with specially trained German Shepherds could find you ... Well, or the Headquarters Loudspeaker: “Comrade private / sergeant / captain Ivanov / Petrov / Sidorov !!! If in a minute you don’t appear before the clear gaze of the authorities ... “I’ll tear my mouth, I’ll gouge my blinkers!” (c) and for the rest of your life you will only work on medicines! ”...

- roads, paths and parade ground covered with ASPHALT!!! Without a single crack!!!

- all buildings - barracks, headquarters, dining room, assembly hall - aka cinema - are freshly painted, washed and licked almost with the tongue.

- and God forbid you throw a cigarette butt or a candy wrapper past the urn - it’s easier to immediately run to the workstation and hang yourself there on an iron cable without soap, because the urns were, if not at every step, but every literally 10-15 meters for sure.

- in the dining room there was no separation in the preparation of food for officers and soldiers ... every working day for lunch (for example) real pilaf with pork meat (and it was still necessary to see what was more in pilaf - meat or rice). And on Saturdays and Sundays, a real barbecue was served for lunch.

- each fighter was given 2 uniforms - one everyday, the second for work ... this is in part ... and at the AWP they also gave out working black overalls.

- from Saturday afternoon until Sunday evening, if you are not a “pilot-raider”, you have served for more than six months, and there is a desire and financial opportunities (well, go to the cinema, buy ice cream, ride a carousel ...), you can easily was to get a leave of absence... "Soldiers from the unit - it is easier for commanders."

- every Sunday afternoon they played two films - the first one is usually super-duper popular or an action movie, or a comedy, and the second ... well, so-so ... if there is nothing to do, then you can watch.

- in the garrison chip there was practically a branch of Greece, in which, as you know, "there is everything" - there would only be money ... and this at a time when the Motherland began to gradually switch to coupons for almost everything.

- well, and another 100500 different ones, which, according to the stories of my older relatives who served, could not be in their units, because it could never be!

At that fabulous time, in that fabulous country, non-combatant troops were transferred to Khozraschet ... The Tsar-Sovereign gave the commander of the “automatic” parts - well, there, rust-covered cans of stew, cereals, crackers, tea, sugar, salt and, of course, a canister of bromine - and ordered the zampotyl: “Spin as you like, but so that the military fighters are fed and watered according to the Charter” ... And on average they sent a High Commission with a check once a quarter.

In our unit, the bomb shelter "in case of a nuclear war" (and - in the literal sense) was turned into a food warehouse ... Potatoes, carrots, beets, onions, garlic and a dozen other types of pears with apples (both fresh and soaked) were interspersed with barrels of sauerkraut. Now, if a “nuclear winter” really happened, our part would have lived at least a year without denying themselves anything ... in a bomb shelter. It was a plus...but there was also a minus. I would have had to live this year standing up, because smoked pork hams were also hanging everywhere - there was free space with a gulkin's nose.

Before our conscription, there was only a pig farm in the unit, somewhere like that for 100 +/- pigs. Served 5 pigs-soldiers. They had a lot of work ... it was not only necessary to feed them: remove the feces, but also score, and skin, and cut the barbecue, and smoke ... in general, "the smoke stood there like a rocker" ... and the corresponding ambre. Of their own free will, only "a rare bird flew to the middle of the pig farm." And so everyone tried to bypass it for a kilometer, including the High Inspection Commissions.

Our unit commander honestly kicked with all his hands, feet, teeth and claws from 8 conscripts from such a high-altitude Azerbaijani village that these conscripts saw the ZIL-130 for the first time in their lives, when the raid on the conscripts reached them, and the boys were loaded into a car and lowered from mountains (literally) ... But! Once “the party said“ We must !!! ”, the commander answered“ Yes ... 2 weeks after arrival at the unit, our Oath Day was determined, and all recruits were forcibly forced to write a letter to their loved ones with an invitation to this celebration. The letters were sealed in envelopes with stamps - to speed up delivery, 7 days to anywhere in the vast Motherland (5 kopecks per envelope) - instead of 14 days if the envelope is unstamped from a military man (1 kopecks per piece in our chip).

The day of the oath passed solemnly, all the newly minted fighters with their parents were treated to dinner (simply chic, the cooks outdid themselves), and each was issued a leave of absence until Monday morning - under the personal responsibility of relatives that on Monday morning they will deliver the “carcasses” of the soldiers on time, in any state, even if in a state of "full and drunk at the piano."

After the oath and before the festive dinner, there was about an hour of free time, and so that the relatives would not just wander around (or you never know where they would stick their curious noses), two parallel excursions were organized. "Spectacles" was taken over by the political officer of the unit - he led from Lenin's rooms in the companies to the assembly hall, which is also a cinema. "Bread" showed zampotyl: from the bomb shelter, turned by his efforts into the "bins of the Motherland", to the pigsty (however, the pigsty showed from a distance from 300 meters, so as not to spoil the appetite before dinner). One of the "tourists" turned out to be the father of one of the 8 conscripts from Azerbaijan. The chairman of the “millionaire collective farm” and the winner of all sorts of government awards there for constant victories in socialist competitions (if at the time of the raid he had not wandered around the district on business, figs his son would have repaid his debt to the Motherland) ... In general, as they say , “the fisherman saw the fisherman from afar”, and literally on his knee, a patronage agreement was immediately concluded over our unit from his collective farm ... In 2 weeks, a pen for sheep was built in an open field behind our unit, a house was built for the caretaker of the flock with everyone communications, and then the first trial batch of young lambs arrived, about 25 heads of commercials. Well, as a bonus, something like half a ton of cheese and cheese ... The only thing is that the chairman of the chef's collective farm insisted that a specialist who knows this business look after the sheep. There was suddenly no other candidate for this position, except for his son ... So in our canteen in the festive menu for all sorts of holidays for the whole unit (well, for the High Inspection Commissions) three new items appeared - shurpa, pilaf and shish kebab from lamb.

When on Monday morning after the oath, all 100 percent of the rookies arrived at the location of the unit after the dismissal ... Some on their own two, some with a "carcass" relatives delivered. The authorities exhaled and ordered none of us to be touched until dinner. And before dinner, we were all gathered on the parade ground, and the commander of the unit made a short speech ... About thirty minutes of commercials. Brief excerpt from the speech: